We first evaluated the growth pattern of spheroids containing MDA-MB-231 metastatic breast cancer cells and mesenchymal stem cells (MSCs), given that MSCs are known to promote tumorigenesis in the tumor microenvironment (TME)19. The tumor spheroid mixture groups used in this experiment were: (1) monoculture of MDA-MB-231 cells, (2) a 1:1 ratio co-culture of MDA-MB-231 cells and MSCs, and (3) a 1:3 ratio co-culture of MDA-MB-231 cells and MSCs. Each tumor spheroid was introduced into a microfluidic chip device cast with Matrigel to investigate the interactions between tumor spheroids and bioengineered HUVEC vessels. Each tumor spheroid formed invasive sprouts into the HUVEC blood vessel. Among the three groups, spheroids containing a 1:1 mixture of MDA-MB-231 metastatic breast cancer cells and MSCs formed the largest number of sprouts and the longest invadopodium. Interestingly, the HUVEC vascular channels in each device, regardless of the spheroid culture conditions, collapsed in the Matrigel ECM environment on Day 1. The collapsed vessels did not allow media to flow through the vascular lumen, and thus, we discontinued the investigation at this point (See Supplementary Information Figure S1 for the invasion of tumor spheroid mixtures in Matrigel). These results demonstrate that, when used alone, Matrigel substantially impairs the formation of perusable blood vessels in microfluidic devices.

Given our observation that HUVEC vascular channels collapse in Matrigel ECM, we next explored the behavior of tumor spheroids containing a 1:1 ratio of MDA-MB-231 metastatic breast cancer cells and MSCs which exhibit the most aggressive growth and invasion patterns in several different ECM conditions. We prepared microfluidic chip devices containing these tumor spheroids embedded in 5 different ECM materials: (1) only collagen I, (2) only Matrigel, (3) 1:1 mixture of Matrigel and collagen I (denoted as M-gel and C-gen), (4) 1:2 mixture of Matrigel and collagen I, and (5) 2:1 mixture of Matrigel and collagen I, respectively. In the collagen I dominant ECM microenvironments, such as groups 1 and 4, the HUVEC vasculatures did not collapse, allowing for media perfusion through the vascular lumens. However, the spheroids cultured in such collagen-rich environments (groups 1 and 4) exhibited less aggressive patterns of vascular invasion and sprouting than those cultured in the Matrigel-rich conditions (groups 2 and 5). In fact, no sprouting behavior was observed among spheroids cultured in only collagen I (group 1). By contrast, while Matrigel-dominant ECMs promoted the invasion of growing tumor sprouts, the bioengineered HUVEC vasculatures collapsed under these culture conditions, making them unsuitable for perfusion studies (See Supplementary Information Figure S2 for the spheroids of MDA-MB-231 and MSCs in Matrigel and collagen I matrices).

Consequently, our results demonstrate that none of the ECM conditions tested promoted the invasion/sprouting of tumor spheroids while simultaneously maintaining the luminal integrity of the HUVEC vasculature. Moreover, because we were not able to identify any aggressive angiogenetic activity in spheroid-exposed HUVEC vessels, we discontinued the investigation at this point.

Since neither the collagen I nor Matrigel-based ECM mixtures could (1) preserve the structure of HUVEC vessels, (2) promote angiogenesis, and (3) facilitate the sprouting of tumor spheroids simultaneously, we explored the utility of other culture conditions in modeling the tumor-vascular interface. Specifically, we sought to optimize our model by co-culturing tumor spheroids with human lung fibroblasts (HLFs) in a fibrin gel matrix. HLFs are stromal cells that support vascular sprouting and tumor invasion by secreting growth factors, such as fibroblast growth factor 2 (FGF-2) and vascular endothelial growth factor (VEGF)—both of which promote the formation of healthy blood vessels through angiogenesis2,20,21. Fibrin ECM components play a complementary role in tumorigenesis by binding to integrins on the surface of tumor and endothelial cells to facilitate tumor invasion and angiogenesis2,22. Therefore, we hypothesized that the synergistic, pro-angiogenic environment created by this culture condition would promote active angiogenesis and tumor sprouting in vitro, while also preserving the luminal structure of our bioengineered tumor blood vessels.

In this trial, we seeded HUVECs to the fibrin-based ECM in the device to form an engineered blood vessel (Fig. 2a). After seeding the endothelial cells, we introduced fluid shear stress on a rocking platform for 3 days, supplying them shear stress around 4–5 dyne/cm2. The engineered blood vessel has been fixed and stained with phalloidin for detecting actin in the cells, anti-VE-cadherin antibodies to visualize endothelial cell–cell adherens junctions, and DAPI to identify the nucleus (Fig. 2c). In addition, the functional perfusability of the lumen structure in fibrin ECM was tested by introducing MDA-MB-231 breast cancer cells (transfected with GFP) into the endothelial lumen (Fig. 2b,d). In addition, we seeded HUVECs to the HLF-laden fibrin ECM (Fig. 3a,c) and tested the functionality as well (Fig. 3b,d).

Perfusable engineered blood vessel formation in fibrin ECM. (a,b) A schematic illustration of the experimental designs for a blood vessel in fibrin ECM (a) and functionality test of the lumen structure (b). (c) Immunostaining of the engineered blood vessels with phalloidin (in red), anti-VE-cadherin antibodies (in green), and DAPI (in blue). (d) Functional perfusability test of the lumen structure (in red) with MDA-MB-231 breast cancer cells (in green).

Subsequently, tumor spheroids composed of MDA-MB-231 cells (denoted as MDA-231) and HLFs were introduced into the fibrin-casted matrix of our microfluidic chip device (Fig. 4). To better mimic the conditions of the human TME, we also introduced HLFs as growth factor suppliers in the ECM bulk and observed the resulting interactions between cultured tumor spheroids and the HUVEC vasculature. Interestingly, we found that this culture condition promoted (1) active sprouting in MDA-231 + HLF tumor spheroids, (2) the formation of a perfusable HUVEC vasculature, and (3) angiogenic sprouting during 6 days of the experiment (Fig. 4c–e). The average number and length of the sprouts formed from the tumor spheroids in this trial were 42 ± 9.42 and 196.08 ± 59.64 µm, respectively. However, while both the tumor spheroids and the HUVEC vasculature actively formed sprouts, they did not invade each other by day 6 of the experiment.

In an effort to promote vascular invasion and more closely mimic metastatic conditions, we examined the growth behavior of spheroids composed of MDA-MB-231 cells + HUVECs in an HLF-laden fibrin ECM, as illustrated in Fig. 5a,b. We found that this tumor spheroid mixture exhibited remarkably active proliferation and sprouting behavior for 5 days in culture (Fig. 5c,d). Consequently, we introduced these into our microfluidic chip device alongside a HUVEC-lined channel and examined any tumor-vessel interactions that developed. Intriguingly, this optimized culture condition promoted (1) the active sprouting of MDA-MB-231 cells + HUVECs tumor spheroids, (2) the maintenance of HUVEC vascular lumens, and (3) angiogenesis for a total of 10 days (Fig. 5e–g) The average number and length of sprouts that formed from the tumor spheroids were 26.5 ± 3.5 and 273.59 ± 43.02 µm, respectively. Moreover, sprouts from the tumor spheroids and HUVEC vascular channels successfully invaded one another on day 6 of the experiment (Fig. 5e–h), as confirmed by the enlarged confocal image shown in Fig. 5 as well as the reversed pseudo–colored image shown in Fig. 5j. 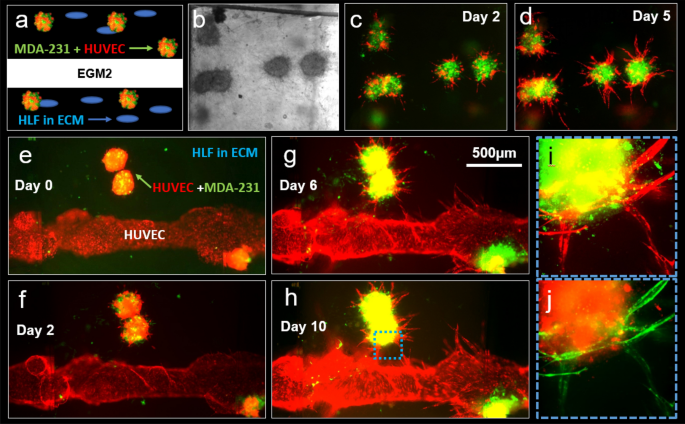 Next, we investigated the molecular mechanisms by which HLFs induced angiogenesis and maintained the integrity of HUVEC vascular lumens. To accomplish this, we prepared samples of HLF conditioned media (HLFCM) and identified any angiogenesis-related proteins in the HLF secretome, as described previously4. Briefly, when HLFs reached confluence in T175 tissue culture flasks, the normal growth media were replaced with 8 ml of serum-free media. After a 24-h incubation period, the supernatant was centrifuged and filtered through 0.2 mm syringe filters (Corning). The resulting HLFCM was stored in aliquots at -80 °C to avoid multiple freeze–thaw cycles. We then quantified and compared the relative levels of angiogenesis-related proteins in EGM-2, a positive control (Fig. 6a), and HLFCM (Fig. 6b) using membrane-based antibody arrays. To do so, each specimen was introduced onto an array membrane and incubated overnight. The relative levels of 55 cytokines associated with angiogenesis in each sample were then detected. Factors in red rectangles represent pro-angiogenic growth factors, and factors in blue rectangles represent anti-angiogenic growth factors (Fig. 6a,b). As shown in the figures, we found that the pro-angiogenic proteins Endothelin-1 and VEGF as well as the anti-angiogenic protein Serpin E1 (PAI-1) were all upregulated in both EGM-2 and HLFCM samples. Additionally, we observed that the pro-angiogenic proteins EGF, EG-VEGF, Persephin, bFGF as well as the anti-angiogenic protein PF4 were all upregulated in EGM-2, but downregulated in HLFCM. Conversely, we found that pro-angiogenic proteins IL-8, MMP-8, MMP-9, HB-EGF, Angiogenin, PDGF-AA, CXCL16, PIGF as well as the anti-angiogenic proteins Serpin F1 (PDEF) and TIMP-1 were all upregulated in HLFCM, but downregulated in EGM-2. 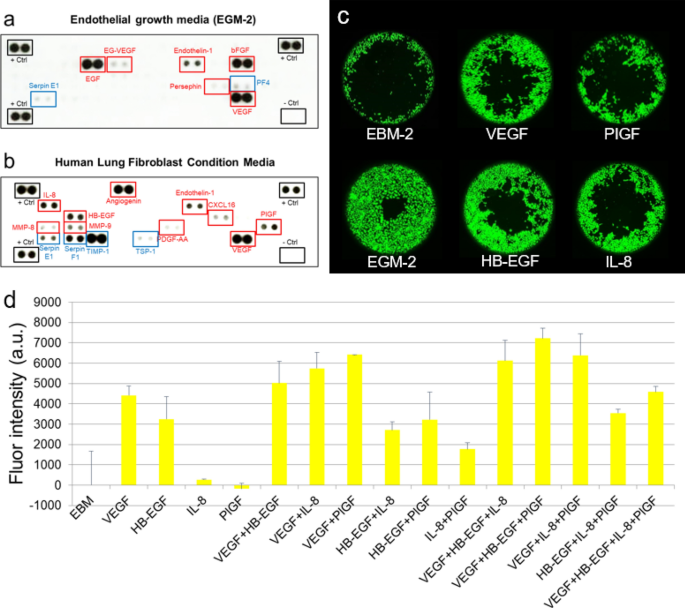 A “one-two punch” to wipe out cancerous ovarian cells

Why a US Presence Can Help European Biotechs Get Ahead