The current COVID-19 pandemic has caused almost a million deaths in the nine months since the causative agent, severe acute respiratory syndrome coronavirus 2 (SARS-CoV-2), was first recognized. The high number of deaths is due to multiple factors, including the severity of the disease, the lack of effective antivirals to effectively counter the infection, limited medical supplies, and the overwhelming burden on the healthcare resources in some countries. A new study by scientists at biotechnology company Genentech, Inc.,  and published on the preprint server medRxiv* in September 2020 attempts to identify the factors which may shape the risk for death in COVID-19 disease. 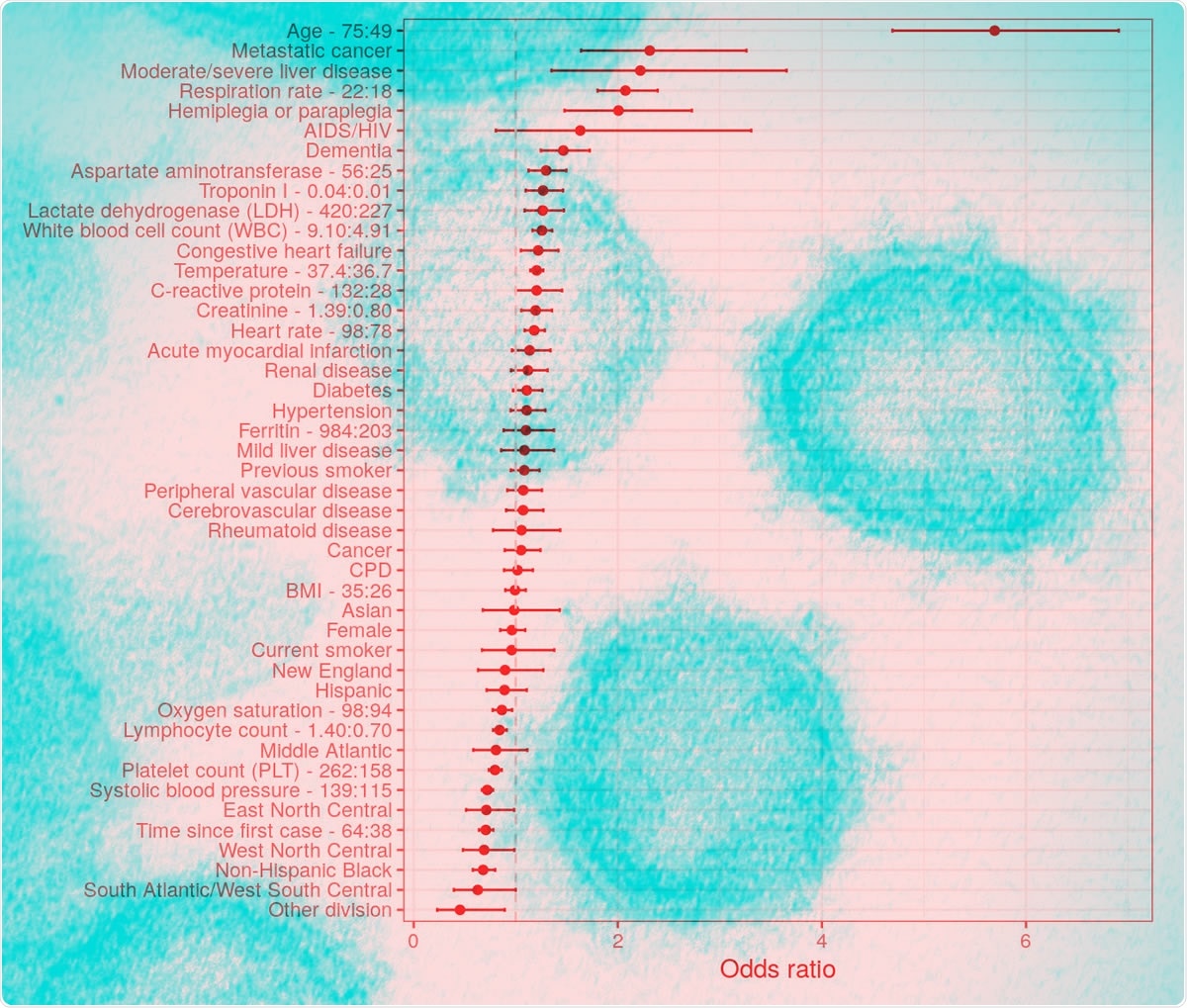 Several prognostic studies have already been published, but reviews show a strong chance of bias in most of them due to multiple factors. The current study aims to assess the prognosis of hospitalized patients concerning mortality alone, using a large group of over 13,000 patients from all parts of the US. The data was retrieved from an Electronic Health Record (EHR) Database.

The median patient age was 62 years, with a majority of non-Hispanic whites at 56%. There was an almost equal number of males and females. Almost 60% had high blood pressure, a third had diabetes, over a quarter had chronic lung disease, and a fifth had kidney problems. About a third and a half were overweight and obese, respectively.

About a quarter had low oxygen saturation at admission. Heart rate was higher at admission, as was the respiratory rate, but not the temperature or BMI. Inflammatory markers were significantly raised in non-survivors at admission.

Patients with a lethal outcome were more often male, 57% vs. 51%, and older, with a median age of 77 years vs. 59 years for survivors. They were also likely to have more underlying illnesses, with a quarter suffering from dementia, hypertension, diabetes, and renal disease.

Using this data to train the algorithm, it was found that age predicted the odds of death very significantly, at sixfold higher odds of death at 75 years compared to 49 years. Other significant risk factors included the presence of advanced cancer, liver disease other than mild degrees, hemiplegia or paraplegia, and dementia.

Mortality decreased with time since the start of the pandemic.

Laboratory markers such as higher aspartate aminotransferase (AST), troponin, C-Reactive Protein (CRP), and white blood cell (WBC) counts, as well as creatinine and Lactate Dehydrogenase (LDH), were all linked to a higher risk of death, along with thrombocytopenia.

Vital signs at admission, namely, low oxygen saturation, high respiratory and heart rate, high temperature, and high BMI, were found to be associated with a higher risk of death.

These are not always nonlinear relationships, since the risk of death is higher with both higher and lower temperature as well as systolic blood pressure. Moreover, lower oxygen saturation is closely related to higher mortality, but only at levels below 95%.

The Importance of Age

When the researchers ranked the risk factors by importance, they found that age was the most important predictor by far, followed by lab results (including the number of breaths per minute, temperature, oxygen saturation, heart rate, white cell counts and LDH levels) and vital indicators. Surprisingly, these were more important markers of mortality than the presence of comorbidities. They also identified calendar time to be a significant predictor of mortality in COVID-19.

Age exponentially increases the risk of death, with the slope becoming ever steeper as the age increases. For instance, in March 2020, the risk of death for a 70-year old and an 80-year-old patient who required hospitalization was 24% and 34%, respectively – but only 2% for an 18-year-old patient. By May, however, 80-year-olds had a mortality of about 20%, showing the predictive effect of calendar time.

The strong effect of age might be because it not only links to the comorbidities that are listed in the model but also others that may cause a worse outcome. Again, advancing age is known to be a predictor of decreased immune function, leading to increased viral persistence, or to an uncontrolled immune response that may cause severe clinical features in COVID-19.

Comparison with Other Models

An earlier review of 50 existing models that offered a prognostic prediction showed that most were smaller in the dataset size and more confined in geographical scope, with a majority being Chinese. The current study has increased power to detect significant risk factors and allows a ready interpretation of the various parameters.

Among all parameters, they say, “age is nearly as prognostic as all other information on demographic and comorbidities.”

When lab results and vital signs are included, the predictive score increases still further. This marks a difference from an earlier study. The most predictive vital signs were oxygen saturation, respiratory rate, and temperature, which agrees with other studies on mortality risk. BMI has also been found to associate with higher mortality.

The positive relationship between higher mortality and markers like Troponin I, LDH, and low platelet count have already been reported by other authors. Whereas the first two may reflect severe damage to the microvasculature, with resulting damage to the heart and other end organs, thrombocytopenia could be the sequel of platelet damage as a result of large and micro-clots. These are known to occur in COVID-19 patients, both because of and worsening microvascular dysfunction.

The neutrophil count is also a strong predictor, as shown in earlier work, but not ferritin. The study also suggests that the presence of underlying illnesses may reflect a higher risk of hospitalization than mortality in hospitalized patients, per se. Discrepancies in this area may be more apparent than real, the authors suggest, especially since all patients with serious illness do not die.

The researchers say they developed a rigorous model that produced results that could be understood by clinicians and were clinically accurate. The use of multiple parameters and a large cohort adds clinical utility to the predictive model was.

While an age-only model was useful, indicating the large predictive value of this single parameter, one with more demographic details and one with both demographic and comorbidity details did not add more accuracy to the prediction. However, the addition of laboratory data and vital signs further boosted the prognostic value, to yield a model that “may be useful to assess the prognosis of hospitalized patients,” pending further validation.

This could help to decide which patients need more specialized care rapidly or to prioritize population groups for vaccination. It could also help to self-identify risk factors for COVID-19 and to evaluate the prognosis in infected individuals. Finally, it may help to classify patients for participation in clinical trials as well as observational studies, to help standardize data for efficacy studies.

medRxiv publishes preliminary scientific reports that are not peer-reviewed and, therefore, should not be regarded as conclusive, guide clinical practice/health-related behavior, or treated as established information.