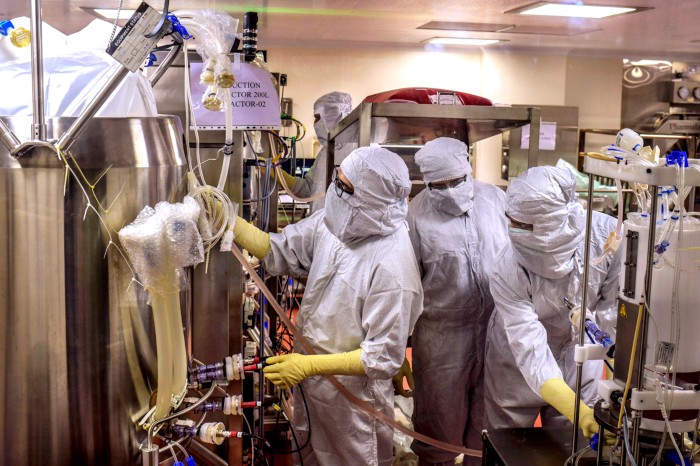 Researchers at the Serum Institute of India in Pune are manufacturing a COVID-19 vaccine, developed at Oxford University. Credit: Atul Loke/NYT/Redux/eyevine

Wealthy countries have struck deals to buy more than two billion doses of coronavirus vaccine in a scramble that could leave limited supplies in the coming year. Meanwhile, an international effort to acquire vaccines for low- and middle-income countries is struggling to gain traction.

Most experts say that late 2020 or early 2021 is the soonest vaccines could be approved and rolled out; they must first undergo large-scale phase III clinical trials to assess their effectiveness and safety. (Russia has approved a vaccine for limited use, but it hasn’t completed phase III trials.)

But pre-orders are rolling in. By mid-August, the United States had secured 800 million doses of at least 6 vaccines in development, with an option to purchase around one billion more. The United Kingdom was the world’s highest per-capita buyer, with 340 million purchased: around 5 doses for each citizen. The European Union nations — which are buying vaccines as a group — and Japan have locked down hundreds of millions of doses of vaccines for themselves (see ‘Vaccine capacity and pre-orders’).

Source: data from Airfinity, up to 21 August / Nature tabulations

The rush is dispiriting for public-health experts who have urged that vaccines be equitably distributed across the world. “We’re not going to get rid of the pandemic until we get rid of it everywhere,” says Mark Feinberg, head of the International AIDS Vaccine Initiative in New York City, which is developing a COVID-19 vaccine with US drug company Merck. “We need to prevent vaccine nationalism,” said Tedros Adhanom Ghebreyesus, the director of the World Health Organization (WHO), at an 18 August briefing.

The situation is reminiscent of the 2009 H1N1 influenza outbreak, when a handful of wealthy countries secured most of the supplies of a vaccine, says Richard Hatchett, head of the Coalition for Epidemic Preparedness Innovations (CEPI), a fund based in Oslo that was created to finance and coordinate vaccines for outbreaks, and which has supported the development of nine vaccines for COVID-19.

The 2009 pandemic was far milder than COVID-19, but the hoarding meant that relatively few people who stood to benefit from the vaccine got it in time to make a difference. “If COVID-19 vaccines are misallocated in the way they were in 2009, the pandemic will last longer, more people will die and the disruption will be greater than it needs to be,” Hatchett says.

The main international effort to secure vaccine supplies is a joint fund called the COVAX facility, spearheaded by Gavi, a Geneva-based funder of vaccines for low-income countries, along with CEPI and the World Health Organization. It aims to secure 2 billion vaccine doses. One billion are for 92 low- and middle-income countries and economies (LMICS), which encompass half the world’s population. The vaccines will cost these regions little or nothing. The other billion are for up to 75 wealthier countries, who will pay for their own vaccines.

COVAX has made a few orders already — such as a deal to buy 300 million doses of a vaccine being developed by the University of Oxford, UK, and UK pharmaceutical company AstraZeneca. But it’s far short of raising the roughly $18 billion that it estimates will be needed from donors to help manufacturers scale up production and to procure and deliver the 2 billion doses. Some wealthier countries, such as the United Kingdom, have expressed interest in joining COVAX, but few have committed to it.

“Their experiment of trying to convince rich countries to join to hedge their bets has gotten very few takers,” says Brook Baker, who studies access to medicines at Northeastern University in Boston, Massachusetts.

Some low- and middle-income countries have struck advance-purchase deals themselves. Brazil and Indonesia, for example, have agreements to buy millions of doses of vaccines that are undergoing phase III trials in their countries (see ‘Best and worst supplied’). The Serum Institute of India (SII), a leading vaccine manufacturer, signed a licence with the University of Oxford to produce one billion doses of its vaccine per year. The doses are intended for LMICS — including doses committed to COVAX — although SII has stated that half the doses will go to India. Some observers say there is little to prevent the country’s government from demanding more. Source: data from Airfinity, up to 21 August

Hatchett says COVAX is working out how to allocate vaccines, including to participant countries that have signed their own bilateral deals with manufacturers. He hopes countries will be transparent about the deals they have made. “We are not viewing countries that are engaging in bilateral agreements as bad guys,” he says. One proposal is to curtail a country’s access, through COVAX, to a vaccine that they’ve already purchased for themselves.

Some scholars and activists have suggested that governments could force developers to license their vaccines to domestic manufacturers — allowing countries to make their own versions of successful vaccines. Under World Trade Organization (WTO) rules, such ‘compulsory licensures’ are allowed; these have been used to make generic forms of antiretroviral drugs against HIV. But these rules cover only patents, not other proprietary information that goes into making a vaccine and getting it approved, says Baker, who argues that countries ought to look into other mechanisms to force vaccine makers to divulge this information.

But Feinberg says compulsory licensure is “meaningless” when it comes vaccines, which are vastly more complicated to make than small-molecule drugs. “It’s not realistic to think every country is going to be making their own version of a vaccine,” he says.

Patents and intellectual property are not what’s standing in the way of fair distribution of COVID-19 vaccines, Feinberg says; rather, equitable access and affordable prices require collaboration between governments and vaccine makers.

If all of the frontrunner candidate vaccines are approved, more than 10 billion doses could be available by the end of 2021, according to companies’ estimates of their manufacturing capacity. Most vaccines will be made in the United States or Europe (see ‘Where vaccines will be manufactured’). But those figures should be taken with a pinch of salt, says Jeffrey Almond, a vaccinologist and visiting scholar at the University of Oxford, who previously led French pharmaceutical company Sanofi Pasteur’s vaccine-development efforts. “They’re a guesstimate,” he says, based on assumptions about how production capacity can be scaled up — some of which, he says, are “overly optimistic”. Many of the vaccines are based on technology that has never been scaled up to the manufacturing levels that companies are hoping for.

Airfinity, a life-sciences market analytics firm in London, currently projects that just one billion doses will be available by the fourth quarter of 2021, after adjusting each developers’ capacity on the basis of the status of their candidate and their track-record of manufacturing the technology on which the vaccine is based. From May to June 2020, CEPI anonymously surveyed 113 manufacturers that produce components of the vaccines, and estimated that production capacity will be 2 billion to 4 billion doses by the end of 2021, presuming trials go well. (Both estimates will change if companies ramp up manufacturing capacity.) The number of people who can be vaccinated will also depend on the number of doses administered. Many of the frontrunner vaccines, including those of Moderna, Pfizer and Novavax, are set to be administered in two doses. Johnson & Johnson intends to trial a one-dose vaccine, and the AstraZeneca–Oxford team is looking at one- and two-dose regimens.

Financial details for many of the purchase agreements are shrouded in secrecy. CEPI, the United Kingdom and the United States have paid for vaccines and funded the research to develop them; often, little is known about the terms attached to this funding, says Duncan Matthews, a specialist on patents and access to medicines at Queen Mary University of London.

It’s clear that vaccine costs will vary: the United States, according to its purchase agreements, is paying less than $4 per dose for the AstraZeneca vaccine but $25 for each dose of the Moderna vaccine, for instance. But few costs have been published for many of the deals, and little is known about whether countries can pull out of purchases if vaccines don’t reach a certain level of efficacy — or when some purchasers might be able to buy additional doses ahead of others.

“What’s in the deals that they’re signing and who will get access to the vaccine and at what price — it’s a complete lack of transparency,” Matthews says.