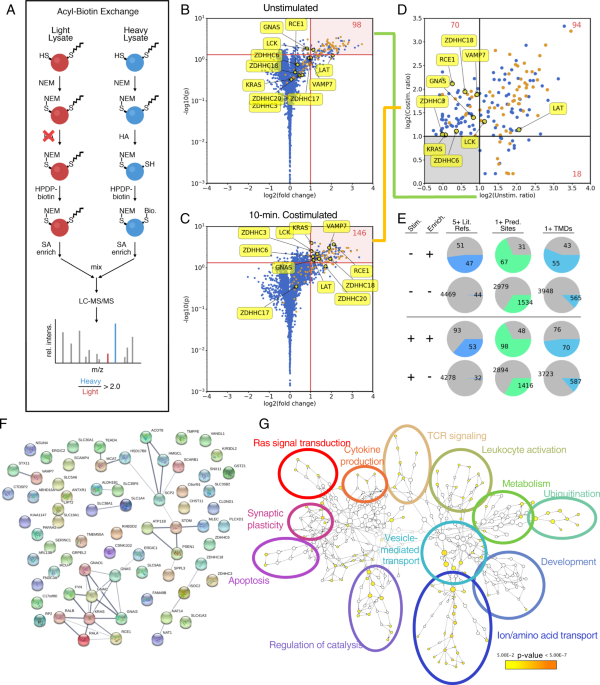 Generation of VAMP7-knockout in Jurkat cells

For the generation of sgRNAs the Atum online tool was used (https://www.dna20.com/eCommerce/cas9/input). The sgRNA oligos were then cloned into the pSpCas9(BB)-2A-GFP (PX458) vector (a kind gift from Feng Zhang [Addgene plasmid # 48138; http://n2t.net/addgene:48138; RRID:Addgene_48138]). Jurkat T cells (clone E6-1) were passaged to 0.125 Mio cells/ml the day before transfection. Five Mio cells were resuspended in 100 µl OptiMem with 10 µg pSpCas9(BB)-2A-GFP with the sgRNA CACCGCACACCAAGCATGTTTGGCA and electroplated with a NEPA21 electroporator (Nepagene) with the following settings: 0.2 mm gap electroporation cuvettes, poring pulse: 175 V, length: 5 ms, interval: 50 ms, number: 2, D. rate: 10%, polarity: +. After 48 h single clones were sorted by FACS for EGFP into 96-well plates. After the cells had recovered and grown the knockout was validated by western blotting and sequencing.

Once the VAMP7-knockout cell line was validated, the re-expression of VAMP7 constructs was performed. Wildtype VAMP7 and mutant VAMP7-C183A, both featuring FLAG-tags, were cloned into the lentiviral vector LegoiG2 (a kind gift from Boris Fehse [Addgene plasmid # 27341; http://n2t.net/addgene:27341; RRID:Addgene_27341])56. HEK293 cells were transfected with the constructs FLAG-VAMP7-WT-LegoiG2 or FLAG-VAMP7-C183A-LegoiG2 plus the third-generation packaging plasmids pMDLg/pRRE with pRSV-Rev and phCMV-VSV-G using lipofectamine. Supernatants containing viruses were harvested after 48 h and concentrated by centrifugation at 10,000 × g and 4 °C for 4–6 h in glass tubes. VAMP7-knockout Jurkat cells were transduced with the viruses by spinoculation, as described previously57. Cells were resuspended in lentiviral supernatant supplemented with Polybrene (6 µg/ml) and spun for 90 min at 37 °C at a speed of 800 × g. After 72 h the cells were sorted by EGFP expression via FACS. One week later the cells were sorted again for EGFP expression and also for the expression of CD3 and CD28 surface markers.

Primary sequences of VAMP7, LAT, DHHC18, and DHHC20 were obtained from UniProt. Full-length constructs of VAMP7 and LAT were engineered bearing His6– and FLAG-tags, while DHHC18 and DHHC20 were designed with FLAG-tags alone, and ordered from Geneart. Truncated constructs of DHHC18 were generated by amplifying FLAG-tagged inserts via PCR. Mutagenesis was performed using the QuikChange Site-Directed Mutagenesis system (Agilent). Constructs were then cloned into the pFastBac1 vector of the Bac-to-Bac system (Thermo Fisher).

Coomassie-stained gel lanes from the ABE enrichment were cut into 30 equal-sized bands and in-gel tryptic digest was performed as described previously31. Digested peptides were resuspended in 6 µl 0.1% (v/v) TFA and 5% (v/v) acetonitrile per band. Analysis of the peptides was performed via reversed-phase capillary liquid chromatography (Ultimate 3000 nanoLC system (Thermo Scientific)) coupled to an Orbitrap Elite mass spectrometer (Thermo Scientific). LC separations were performed on a capillary column (Acclaim PepMap100, C18, 3 μm, 100 Å, 75 μm i.d.×25 cm, Thermo Scientific) at an eluent flow rate of 300 nL/min using a linear gradient of 3–25% B after 53 min with a further increase to 80% B after 80 min. Mobile phase A contained 0.1% formic acid in water, and mobile phase B contained 0.1% formic acid in acetonitrile. Mass spectra were acquired in a data-dependent mode with one MS survey scan with a resolution of 60,000 (Orbitrap Elite) and MS/MS scans of the 15 most intense precursor ions in the linear trap quadrupole were used. Raw data have been deposited at the ProteomeXchange Consortium via the PRIDE partner repository59.

Identification and SILAC quantification were performed using MaxQuant software (version 1.4.1.1) with the Uniprot human protein database (2014 release). Proteins were filtered with the following criteria: (i) not identified only by site, reverse, or known contaminant (MaxQuant), (ii) at least one unique peptide, and (iii) at least two razor + unique peptides. The unstimulated Jurkat ABE enrichment we published earlier31 (n = 6) was reanalyzed using the following new procedure, allowing direct comparison to the stimulated Jurkat ABE dataset described here (n = 4). First, missing values were imputed with the median normalized heavy/light ratio of the specific LC-MS/MS run—in many cases this was very close to 1.0 (representing the background). H/L ratios were then transformed to log2 values and the mean H/L ratio and one-sample t-test p-values were calculated. Volcano plots were generated plotting the log2 fold-change to the −log10(p) value, giving rise to a pool of high-confidence palmitoylated proteins. It should be noted that the median coefficient of variance (CV) from the stimulated dataset is higher (92%) than that of the unstimulated dataset (65%). To validate the enrichment of palmitoylated proteins under both conditions in an orthogonal way, enriched pools were analyzed based on three criteria, described previously31: (i) previous reports in other palmitome studies, (ii) predicted palmitoylation sites (CSSPalm 4.0), and (iii) predicted TMDs (TMHMM 2.0)33,34.

Coverslips and dishes preparation: 12mmø coverslips (VWR, 631-0666) were precoated with 0.02% of poly-L-Lysine for 20 min at room temperature and were washed 3 times in water before being dried and kept for maximum 2 days. 100,000 cells were incubated on coverslips for 30 min in PBS.

Fixation: Cells were fixed with 4% paraformaldehyde (Life Technologies, FB002) for 15 min at room temperature, washed once in PBS and excess of paraformaldehyde was quenched for 10 min with PBS 10 mM glycine (Thermo Fisher Scientific, G8898). Coverslips were kept at 4 °C in PBS until permeabilization and staining.

Staining: Cells were permeabilized for 30 min at room temperature with PBS + 0.2% Bovine Serum Albumin (BSA, Euromedex, 04-100-812) and 0.05% Saponin (Sigma–Aldrich, S4521). Cells were then incubated for 1 h at room temperature with primary antibody, then washed three times with PBS 0.2% BSA 0.05% Saponin and incubated protected from light for 20 min in the same buffer with spun secondary antibodies. After washing once with PBS BSA Saponin, and once with PBS, coverslips were soaked three times in PBS, three times in water, and mounted on slides.

Microscope: Images were acquired with a Leica DmI8 inverted microscope equipped with an SP8 confocal unit using either a ×40(1.35NA) or ×63(1.4NA) objective. Single plane images or Z-stack of images were acquired (pixel size around 60 nm).

Analysis of VAMP7 colocalization with Giantin: Z-stack (0.5 μm) images of similarly dimensioned Jurkat cells were chosen. In this z-stack, an ROI surrounding the Golgi was defined based on Giantin staining. Within each ROI, masks based on both Giantin and VAMP7 stainings were created by thresholding. Automatic colocalization assays were performed with Mander’s overlap coefficient, using the JACoP plugin for ImageJ64.

Recruitment at the immune synapse and “Mean Cell” creation: Single images corresponding to the middle planes of conjugates were extracted from Z-stack. T cells were cropped and oriented in the same way regarding their synapse (script#1). Obtained T-cell images were grouped by condition (WT/C183A ± SEE) and fluorescence intensities were normalized by the mean fluorescence intensity (MFI). Images were then resized to the smallest image size in order to create a normalized stack of images for each group (script#2). All groups were normalized (size and intensity) before being compared. Stacks of aligned cells were finally projected (averaging method) giving single plane “mean cells” (script#3). Stacks were resized to obtain a 1-pixel height stack by averaging the fluorescence intensity of the total height of each image. Projections of the 1-pixel resized stacks were obtained based on average and standard deviation methods and pixel intensities profiles were performed along projections width (script#4). In order to get a cell-by-cell quantification, we also computed an enrichment ratio at the synapse. This enrichment was defined as the ratio between the total cell fluorescence and the fluorescence in the synaptic region (rectangle at the synapse representing 20% of the total cell). (script#3).