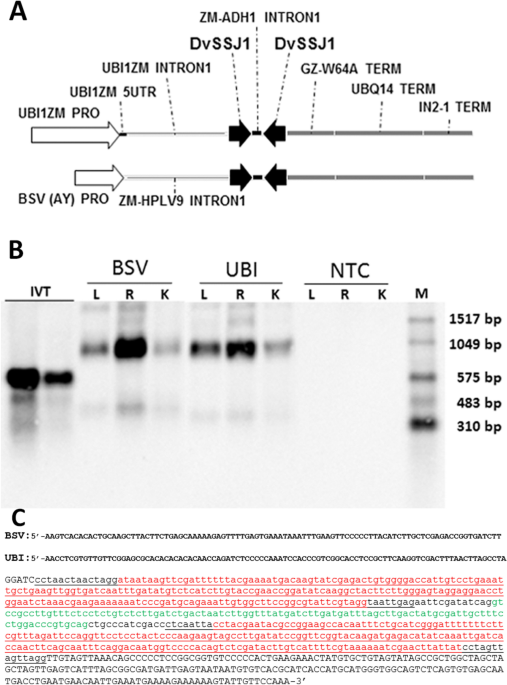 The transgenic expression cassette (Fig. 1A) is expressed as a transcript that contains two inverted RNA fragments of the smooth septate junction protein 1 (DvSSJ1) gene from Diabrotica virgifera (WCR)8 separated by an intron connector sequence derived from the intron 1 region of the Zea mays alcohol dehydrogenase (zm-Adh1) gene24 to form a hairpin double-stranded RNA. The transcription product of this cassette is intended to knockdown the expression of the smooth septate junction in the mid-gut of the WCR via RNA interference9. Expression of the DvSSJ1 fragments is controlled by a third copy of the ubiZM1 promoter, the 5′ UTR, and intron25, in conjunction with the terminator region from the Zea mays W64 line 27-kDa gamma-zein (Z27G) gene26,27. Two additional terminators are present to prevent transcriptional interference15, which includes the terminator region from the Arabidopsis thaliana ubiquitin 14 (UBQ14) gene28 and the terminator region from the Zea mays In2-1 gene29. The BSV promoter30,31 was also used to express the same DvSSJ1 cassette. Single copy T0 transformants with a WCR damage score of < 1 were selected8 for further characterization at the T1 generation.

Total RNA was isolated using TRIzol Reagent (Invitrogen). Following extraction, the total RNA was visualized on an agarose gel to determine the quality and was quantified on a NanoDrop spectrophotometer (Thermo Fisher Scientific). The mRNA was isolated from total RNA using a FastTrack MAG kit (Invitrogen) and quantified by an Agilent 2,100 bioanalyzer (Agilent Technologies). DvSSJ1 antisense riboprobe was in vitro transcribed from the DvSSJ1 PCR product (210 bp) and was labeled with digoxigenin-labeled nucleotides (DIG-11-UTP) according to the procedures provided in the DIG RNA Labeling Kit (Roche). The detailed mRNA northern method was described in the Supplementary Method. Additional northern analyses were conducted with total RNA as described before8. One microgram of total RNA was used to generate a cDNA library to sequence the DvSSJ1 transcript in transgenic plants. Two independent laboratories carried out 3′ and 5′ RACE for sequencing the full-length DvSSJ1 transcript using a 5′/3′ RACE kit (Roche) and RACE conditions provided in Supplementary Method.

For ISH analyses, target probes, preamplifier, amplifier, and label probe (Supplementary Table 4) were designed by Advanced Cell Diagnostics (Hayward, CA) and samples were processed as previously described32. Root tissues were fixed in 10% neutral buffered formalin (4% formaldehyde) for 48 to 72 h and processed for paraffin embedding. Sections (4 μm) were processed for RNA in situ hybridization with the BaseScope Detection Kit (RNAscope Red Assay) according to the manufacturer’s standard protocol (Advanced Cell Diagnostics, Hayward, CA). Images were acquired using a Leica Aperio CS2 digital scanner and captured at 40× magnification with a resolution of 0.25 µm pixel−1.

For small RNA sequencing, 1 μg of RNA was used to generate small RNA libraries using the small RNA-Seq kit (Illumina)9. The total clean reads of each sample were normalized into reads per million (RPM) for the expression of DvSSJ1 siRNAs to determine differentially expressed sRNAs. Trimmed reads 18 to 41 nt in length were aligned to the 210-bp DvSSJ1 sequence using Bowtie 233. Only perfectly matched reads were included for analysis of sequence length distribution (Supplementary Figure 5). The 18- and 41-nt DvSSJ1 reads were visualized using Integrative Genomics Viewer software 2.8 (Broad Institute, Cambridge, MA, USA) (https://software.broadinstitute.org/software/igv/). The maize miR168 was determined by searching the miRBase (https://www.mirbase.org/, release 21) and used as a control for quantification and northern analyses of siRNAs (Supplementary Table 4).

The sources of DvSSJ1 210 bp homologous sequences were identified and selected from published data8,16 and listed in Supplementary Table 1. The transcriptomes of six additional insects were assembled as previously described32. Briefly, cDNAs prepared from larva were sequenced by Illumina paired-end and 454 Titanium sequencing technologies. De novo transcriptome assemblies were performed using Trinity method34. The AlignX tool of Vector NTi 10.3 (Invitrogen) was used to create alignments between the DvSSJ1 210-bp sequence and each homologous sequence. Each alignment was inspected to determine the percent identity over the length of the alignment. The longest contiguous match between the DvSSJ1 fragment and each of the homologous sequences from the various insects was determined by visual inspection. All the data were summarized in Table 1, Supplementary Table 1, and Supplementary Fig. 7.

To produce DvSSJ1 dsRNA, gene-specific primers (Supplementary Table 3) containing T7 RNA polymerase sites (5´d[TAATACGACTCACTATAGGG]3´) at the 5′ end of each primer were used to amplify PCR product which served as the template for dsRNA synthesis by in vitro transcription.

Fragment length samples were treated with RNase A/T1 to remove single-strand T7 sequence from both ends (Supplementary Fig. 9and 10). All dsRNA/RNA samples for bioassays were purified by RNA spin column (Invitrogen), and then quantified by nanodrop 8,000 (Thermo Fisher Scientific).

Bioassays were conducted to determine the response of WCR to dsRNA exposure via oral ingestion. WCR eggs were obtained from an internal colony (Johnston, IA) and incubated in an environmental chamber until the eggs hatched. Neonates were used in each bioassay within 24 h of hatching. All bioassays were conducted in 24-well Falcon culture plates. Stonefly Heliothis Diet (SHD, Ward’s Science, Rochester NY) comprised the base dry diet for WCR. A proprietary mixture of additional ingredients was added to SHD to stimulate feeding and/or allow for the biological maturation of WCR. In internal testing, this diet typically generates less than 30% mortality in the negative control, similar to other WCR laboratory diets17. On Day 0 of each respective bioassay, the dry diet was mixed with RNase free water (negative control) or a liquid test substance of interest to achieve the desired concentration. Approximately 300 µl (~ 300 mg) of freshly prepared diet was dispensed into wells of the bioassay plates. One WCR neonate was placed in each well. Each plate was sealed with heat-sealing film, and two small holes were poked over each well to allow for ventilation. Bioassays were conducted in an environmental chamber set at 21 °C, 65% relative humidity, and continuous dark for a total of 14 days. Every 3 to 4 days, new bioassay plates were prepared with fresh diet as described for Day 0, and living WCR were transferred to the new plates and missing or dead organisms were recorded. After 14 days, each bioassay was complete, final mortality was assessed, and surviving organisms were individually weighed. Organisms recorded as missing from a well or lost in the transfer, or wells containing more than one organism, were excluded from statistical analysis.

Two 21-mer’s, siRNA-1 and -2 of DvSSJ1 were selected based on previous dsRNA-feeding data, which showed higher accumulation in WCR midgut9, and were designed for expressing 21-bp siRNAs according to the rules for artificial microRNA design20,35. The 21-bp siRNAs were incorporated into the zma-miR396h backbone19,20 to compare with the dsRNA 210-bp fragment of the DvSSJ1 gene8. The silencing cassettes (Fig. 4) consisted of the maize ubiquitin promoter, maize ubiquitin intron 136, siRNA unit or two 210 bp stretches of DvSSJ1 and an intervening truncated maize ADH intron1, designed to support assembly into a dsRNA hairpin, and the PIN II terminator37. The DvSSJ1 constructs were transformed via Agrobacterium tumefaciens into a commercial maize elite-inbred line, PHR0338. T0 maize transformants were screened by qPCR analyses39 and single-copy T-DNA integration events were used for further characterization. In the T0 greenhouse assay, 10–12 independent events per each construct (siRNA), eight DvSSJ1 210-bp dsRNA events (T0 plants) and non-transformed PHR03 control (NTC) were infested with 1,000 WCR eggs at the V6 (six-leaf) stage and evaluated for WCR damage23 and to support the expression of RNA’s analyses8.

Quantigene analyses for siRNA and dsRNA quantification in plants

Quantification of dsRNA transcripts was conducted as previously reported32 and siRNAs were detected by a luminometer (Promega Glomax) using a modified method40. Target specific probes (Supplementary Table 3) were designed to quantify DvSSJ1 siRNAs using a QuantiGene miRNA 2.0 assay (Supplementary Fig. 11). RNA oligo duplexes of siRNA-1 and -2 were used to generate a standard curve for the quantification and ZM-miR168 oligo duplex was included as an internal control to normalize sample variations. Aliquots of each plant RNA sample were diluted to 6.25 ng μl−1 using TE buffer. Each reaction comprised 125 ng of total RNA in a total volume of 20 μl. Standard curves comprised duplexed RNA oligo’s diluted with 10 ng μl−1 carrier yeast RNA. Standard curves covered six-points of each targeted duplex ranging from 10 pg – 0.0032 pg, at fivefold dilutions per point. Samples, controls, and curves were all run in triplicate as technical repeats. Standard curves were employed to calculate pg of siRNA per reaction which was further extrapolated to pg of siRNA per μg of total RNA. Hybridization, signal amplification, and data acquisition were carried out in a standard 96-well plate following the procedure described in Supplementary Method.

For weight, SAS PROC GLIMMIX was used to conduct a linear model analysis to generate estimated means, 95% confidence intervals and the statistical comparisons between each treatment and the bioassay control. Error was initially assumed both independent and identically distributed and later confirmed by visual inspection of the residuals from the fitted model.

dsRNA Fragment Length data: Treatments with two or fewer surviving insects were not included in the analysis. For both mortality and weight, statistical significance was established if the P value was < 0.05. No multiplicity adjustment was used because the risk of falsely declaring that a treatment does not significantly differ from the control was considered of greatest concern.

Mean values and standard deviations were calculated by linear regression using Minitab 15 statistical software. The difference in leaf number was tested by a one-way analysis of variance taking the phenotype and the presence or absence of the transgene as the sources of variation. Tukey’s family error rate was chosen for one-way multiple comparisons with a P value level of significance equal to 0.05.