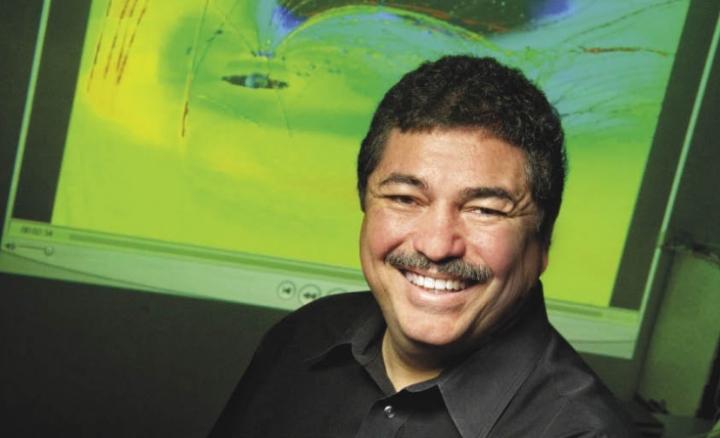 A physicist at The University of Texas at Arlington is developing a new scale to measure weather storms in space that could lead to a better understanding of how those storms impact Earth.

“We want to see how that electrical current created during space weather episodes transfers and affects space and the Earth,” said Ramon Lopez, UTA professor of physics. “We know it affects satellites, which in turn affect life on Earth.”

Lopez received a three-year, $611,472 grant from the National Science Foundation for the project, titled “Extraction and Transport to the Magnetosphere of Solar Wind Energy During Periods of Low Mach Number Solar Wind Flow.”

Magnetic activity in space is currently measured by the disturbance storm time index, or Dst. Lopez is working to develop a new classification system for geomagnetic storms based on overall storm energy, focusing on storms with large amounts of power that dissipate in the ionosphere, where such activity can have significant space weather consequences. The ionosphere is the layer of the Earth’s atmosphere about 40 miles to 600 miles above the surface.

“This new classification would use low mach numbers to determine what’s going on in the ionosphere,” Lopez said. “Understanding energy transfer is important because we have to know where that energy is going and how to measure it, because it heats up the ionosphere.”

He said geomagnetic storms represent the extremes of the local geospace environment and indicate times when our satellites for defense and commerce are most vulnerable.

“What he develops here at UTA could impact how we measure space weather conditions during extreme conditions,” said Alex Weiss, chair of the UTA Department of Physics.

Lopez has received millions of dollars in research funding from sources including the National Science Foundation and NASA. His research interests are primarily in magnetospheric physics and space weather, as well as solar wind variations and what that shows about solar activity.

Earlier this year, Lopez was named to the UT System Academy of Distinguished Teachers for his excellence in teaching and mentoring students. In 2018, he was inducted into the UTA Academy of Distinguished Teachers and also received the Hispanic Engineer National Achievement Awards Conference Education Award from Great Minds in STEM, a nonprofit organization that promotes STEM careers, especially in underserved communities.

In 2017, Lopez received the UT System Regents’ Outstanding Teaching Award and the UTA Award for Excellence in Doctoral Mentoring, and was elected a fellow of the American Association of Physics Teachers for his contributions to physics education. He won the American Geophysical Union’s 2016 Space Physics and Aeronomy Richard Carrington Award, which honors recipients’ significant impact on the understanding of science by students and the public. He was the 2012 winner of the APS Edward A. Bouchet Award, which seeks to promote the participation of underrepresented minorities in physics by identifying and recognizing a distinguished minority physicist who has made significant research contributions in the field.

He also received the Society for the Advancement of Chicanos/Hispanics and Native Americans in Science Distinguished Scientist Award in 2010, given to members for their dedication to science, education and mentoring and for their willingness to serve as role models for the next generation of minority scientists. In 2002, Lopez received the APS Dwight Nicholson Medal for Outreach, which honors humanitarian service.

Lopez has consulted with school districts and education agencies across the country to improve standards in science education. In December 2018 he was named chair of the Science Academic Advisory Committee for the College Board and will serve a two-year term. From 2010-13, he co-chaired the writing team that produced the Next Generation Science Standards, which provides content standards for K-12 science educators.