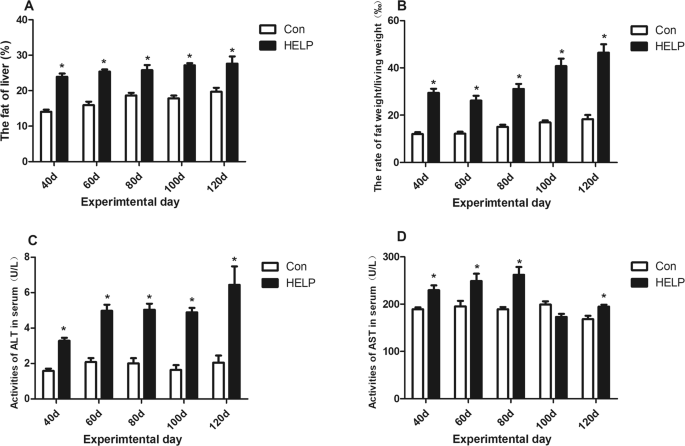 A total of 72 healthy, 90-day-old Hyline layers were obtained from a commercial layer hen farm. The layer hens were randomly divided into two groups (control group, HELP group), and each group had 36 layers with 6 replicates. For all treatments, the animals were acclimatized for 30 days at an animal farm under hygienic conditions prior to the commencement of the experiment. Layers in the formal experiment were 120 days old.

The layers in the control group (36 layers) were fed a basal diet (metabolic energy 11.21 MJ/kg, crude protein 15.86%) formulated to meet the nutritional requirements of layers (NRC, 1998), while the layers in the HELP group were fed a high-energy low-protein diet (metabolic energy 12.97 MJ/kg, crude protein 12.00%), and the other nutritional ingredients were the same as those in the basal diet. The detailed feed formulation and the feed nutrition levels of each group are shown in Table 3. And all layers were maintained with ad libitum access to food and water with 16–17 h of light time during the formal experiment. The whole experimental period lasted 120 days.

On experimental days 40, 80 and 120, twelve birds were randomly selected from the 6 replicates in each group, and then all layers were weighed after fasting for 12 h. Then, the 12 randomly selected layers from each group were anaesthetized and humanely sacrificed after blood collection, and the livers were removed. The living layers, livers, and abdominal fat pads were weighed, the indexes of liver (liver weight/live bird weight) and abdominal fat (abdominal fat pad/live bird weight) were calculated, and fat percent in the liver was determined by the Soxhlet extraction method56. The remaining livers were stored by different methods to observe related indexes.

Total triglyceride (TG), total cholesterol (T-Ch), high-density lipoprotein cholesterol (HDL-Ch), alanine aminotransferase (ALT) and aspartate aminotransferase (AST) levels in serum were determined according to the manufacturer’s instructions on experimental days 40, 80 and 120. Then, an ultraviolet and visible spectrophotometer (UV-754), semi-automatic biochemical analyser and enzyme standard instrument were used to determine their concentrations and activities. The commercial kits for these assays were purchased from Nanjing Jiancheng Bioengineering Institute (Nanjing, China).

On experimental day 120, the liver tissues from layers were dissected and either washed with cold saline and fixed in 10% neutral buffered formalin or fixed in OCT after freezing via gradient cooling in liquid nitrogen. The formalin-fixed samples and OCT-fixed samples were routinely processed, sectioned at 5 μm, and stained with haematoxylin and eosin (H&E) and Oil red O staining. The stained sections were observed using an optical microscope, and photographs were taken.

The OGTT was determined as described in a previous study with a slight modification58. In brief, on experimental days 40, 80 and 120, layers in the control and HELP groups were fasted for 12 h, and six layers in each group were selected to receive a glucose bolus (2 g/kg BW, 20% w/v H2O) by oral gavage. Then, blood glucose concentration was determined at 0 min, 15 min, 30 min, 120 min, 240 min, and 300 min via small brachial blood vessels using a handheld glucometer (ACCU-CHEK, US). The AUC was calculated by GraphPad Prism7.

The IST was determined as previously described with a slight modification58. Briefly, on experimental days 40, 80 and 120, six layers in each group were selected for insulin treatment. Insulin-treated chickens received 100 µg/kg BW bovine insulin (Solarbio, China; diluted in 1X PBS) via i.p. injection, and then blood glucose concentration was determined at 0 min, 15 min, 30 min, 60 min, and 120 min. AUCs were calculated by GraphPad Prism7.

The gene expression levels were assessed through real-time quantitative polymerase chain reaction (RT-qPCR). First, total RNA from the liver was isolated using TRIzol reagent (Takara, Japan) according to the manufacturer’s instructions, and the concentration of RNA was determined by a GeneQuant 1300 spectrophotometer. Reverse transcription was performed using a commercial kit (Takara, Japan) according to the manufacturer’s instructions. The specific primers for insulin receptor (InsR), TOR, S6K1, FOXO1, 4EBP1, GLUT-1, GLUT-3, GLUT-8 and SREBP-1 were designed using Primer Premier software (PREMIER Biosoft International, USA) and are shown in Table S2. The protocol used for amplification of the PCR products consisted of denaturation at 95 °C for 8 min, followed by 40 cycles of amplification at 95 °C for 10 s, then annealing and extension at 60 °C for 45 s. At the end of the PCR protocol, melting curve analyses were performed for all genes. All reactions were performed on an ABI Quant7.0 (Applied Biosystems, USA). Relative gene expression levels were calculated based on qPCR efficiency (E) and difference in the cycle threshold (ΔCt) of the treated versus control groups for both target and reference genes according to the formula. Ct represents the cycle threshold, ΔCt (sample) = Ct (target gene) − Ct (reference gene), ΔCt (calibrator) = Ct (target gene) − Ct (reference gene), ΔΔCt = ΔCt (sample) − ΔCt (calibrator), and 2-ΔΔCT represents the relative expression of the initial complementary DNA (cDNA) of the target gene. The internal reference β-actin or GAPDH gene was used as an internal control for the normalization of the results.

Sample preparation for the metabolome analysis

The liver samples from layers were prepared for GC/MS-based metabolome analysis according to a previous study with a slight modification. In brief, ① each 50 mg liver sample was mixed with 0.4 mL of extraction mixed-solvent (V methanol: V chloroform = 3:1) and 20 µl of L-2-chlorophenylalanine (1 mg/mL stock in dH2O, Sigma-Aldrich, Shanghai, China) as an internal standard, mixed with a vortex for 30 s and homogenized in a ball mill for 6 min at 45 Hz. After the suspension had been centrifuged at 12000 rpm for 15 min at 4 °C, the supernatant (0.36 mL) was transferred into a fresh 2 mL GC/MS glass vial, and 18 μL supernatant from each sample was pooled as a QC sample. ② The resultant supernatant was lyophilized using a freeze dryer. The lyophilized samples were mixed with 20 mg/mL methoxyamine hydrochloride (Sigma-Aldrich, Shanghai, China) dissolved in pyridine and then incubated for 30 min at 80 °C. Next, the BSTFA reagent (1% TMCS, v/v) was added to the sample aliquots, and the mixture was incubated for 2 h at 70 °C. After incubation, the mixture was added to 8 µL FAMEs (standard mixture of fatty acid methyl esters, C8–C16: 1 mg/mL; C18–C24: 0.5 mg/mL in chloroform) and the QC sample, and the resultant supernatant was subjected to GC/MS analysis.

GC/TOF/MS analysis was performed using an Agilent 6890 gas chromatograph system coupled with a Pegasus HT time-of-flight mass spectrometer. The system utilized a DB-5MS capillary column coated with 5% diphenyl cross-linked with 95% dimethylpolysiloxane (30 m × 250 μm inner diameter, 0.25 μm film thickness; J&W Scientific, Folsom, CA, USA). A 1 μL aliquot of the analyte was injected in splitless mode. Helium was used as the carrier gas, the front inlet purge flow was 3 mL/min, and the gas flow rate through the column was 1 mL/min. The initial temperature was kept at 80 °C for 1 min, then raised to 295 °C at a rate of 10 °C/min, and then kept for 7 min at 295 °C. The injection, transfer line, and ion source temperatures were 280, 280, and 250 °C, respectively. The energy was −70 eV in electron impact mode. The mass spectrometry data were acquired in full-scan mode with an m/z range of 33–600 at a rate of 20 spectra per second after a solvent delay of 300 s.

Processing and analysis of metabolite date

Chroma TOF4.3X software of LECO Corporation and LECO-Fiehn Rtx5 database were used for raw peak exacting, the data baseline filtering and calibration of the baseline, peak alignment, deconvolution analysis, peak identification and integration of the peak area [1]. The RI (retention time index) method was used in the peak identification, and the RI tolerance was 500059.

Overall, 766 peaks were detected, and the internal standard normalization method was employed in this data analysis. The resulting three-dimensional data involving the peak number, sample name, and normalized peak area were fed to the SIMCA14 software package (Umetrics, Umea, Sweden) for principal component analysis (PCA) and orthogonal projections to latent structures-discriminate analysis (OPLS-DA)60. To obtain a higher level of group separation and obtain a better understanding of the variables responsible for classification, supervised orthogonal projections to latent structures-discriminant analysis (OPLS-DA) was applied. To refine this analysis, the first principal component of variable importance projection (VIP) was obtained, and the remaining variables were then assessed by Student’s t test (P > 0.05)61; variables were discarded between two comparison groups. To better understand metabolite changes, functional and integrative analyses of upregulated or downregulated metabolite data (P < 0.05) were performed in MetaboAnalyst 4.0 for enrichment and pathway analysis.

Study shows how inhibitory learning enables memories to be stable over...

‘Natural killer’ cells found to be a key determinant of severe...