Fig. 1: Phenotypes of drought-sensitive and drought-tolerant plants under control (left), drought for 12 days (middle), or rehydration for 30 days (right). 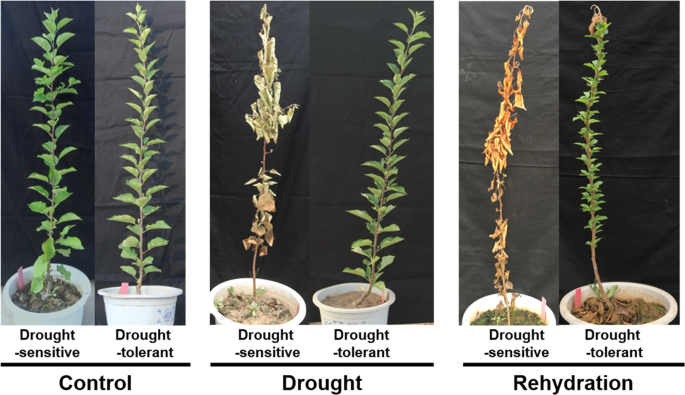 The phenotype of F1 progenies of R3 (M. × domestica) × M. sieversii is depicted after drought treatment and rehydration. F1 progenies with drought-sensitive or drought-tolerant plants were propagated by tissue culture and transplanted to soil for an additional 10 months. The plants were then treated with drought stress for 12 days and rehydrated for 30 days 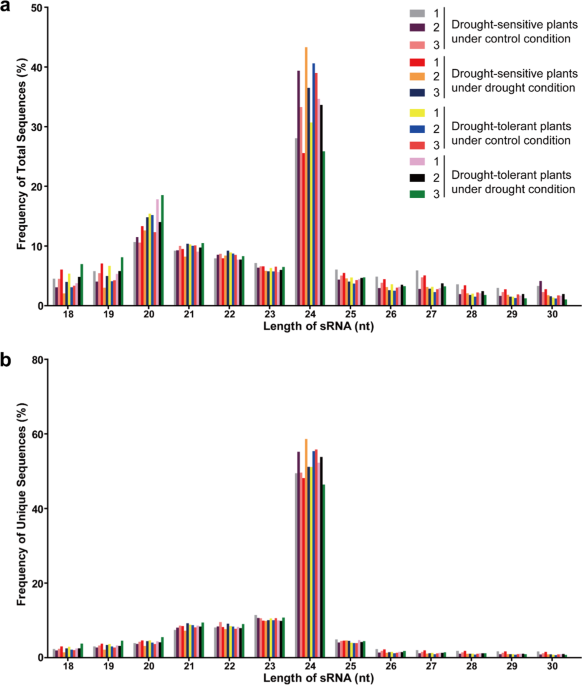 a redundant sRNAs. b unique sRNAs. The numbers 1, 2, and 3 indicate three biological replicates

Identification of known and novel miRNAs in apple

A total of 4.4 M redundant reads, including 205 precursors and 206 mature miRNAs, were mapped to the miRbase without mismatch (Supplementary Tables S2 and S3). 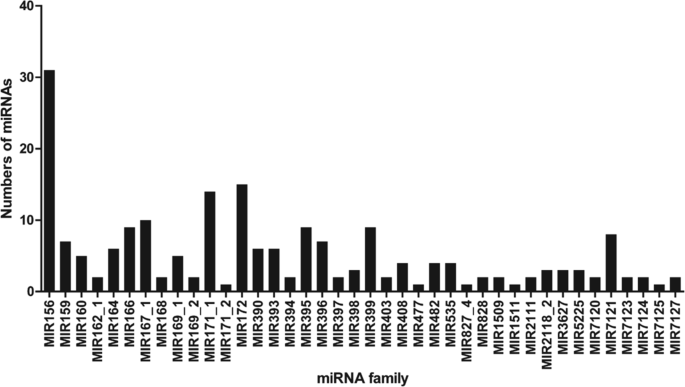 Expression analyses of the miRNAs in apple

The miRNAs identified in drought-sensitive or drought-tolerant plants in each treatment were classified into six categories of expression based on normalized read counts: no (0 reads), extra-low (0–10 reads), low (10–100 reads), moderate (100–1000 reads), high (1000–10,000 reads), and extra-high (>10,000 reads) expression (Fig. 4). Highly similar percentages of identified miRNAs fell into the same category in each treatment (Fig. 4a). The largest percentage of known miRNAs fell into the low category, followed by the moderate and extra-low categories, whereas the lowest percentages fell into the no expression category (Fig. 4b and Supplementary Table S6). MiR1511 was the most abundant miRNA, with over 60,000 normalized reads in each treatment. The majority of novel miRNAs had low abundances in each treatment (Fig. 4c and Supplementary Table S6). For example, miRn-54 had 0.75 normalized reads in a library of untreated control drought-tolerant plants. Moreover, different members of the same miRNA families displayed different expression levels. For example, miR156h had more than 300 normalized reads, but miR156t had <10 (Supplementary Table S6). Notably, 20 miRNAs were absent in at least one treatment, including 12 known and 8 novel miRNAs (Supplementary Table S6). In drought-tolerant plants, miR3627 a/b/c, miRn-50, miR-61, and miRn-158 were not present under drought treatment, whereas miR399 e/f/g/h, miRn-67, and miRn-203 were not detected under control conditions. In drought-sensitive plants, miR828a and miR828b were absent under both conditions, whereas miRn-11 and miRn-78 were not present under drought. In addition, miR169c and miR169d were only detected in drought-sensitive plants under drought, whereas miR7128 and miRn-54 were only detected in drought-tolerant plants under control conditions (Supplementary Table S6).

Fig. 4: Expression levels of miRNAs with normalized read count frequencies in each treatment. 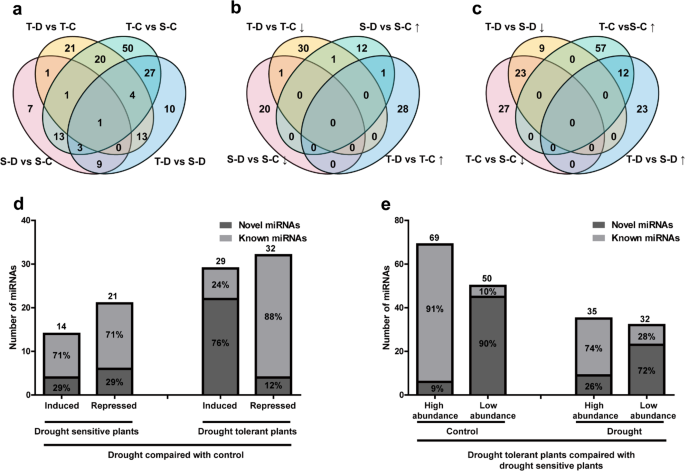 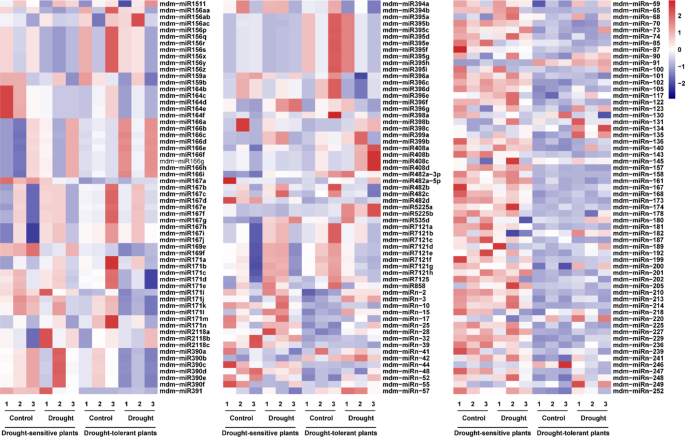 Up- and downregulated genes are indicated in red and blue, respectively. Color brightness reflects the magnitude of difference. The numbers 1, 2, and 3 indicate three biological replicates

In addition, the expression levels of 22 miRNAs that were similar in both plant groups under normal conditions were either reduced or increased after drought treatment, including miR156 aa/p/q/r/s/x/y/z, miR390 a/b/c/d/e/f, miRn-134, miRn-249, and miR5225 a/b (Supplementary Table S7). Of these 22 miRNAs, nine were responsive to drought in drought-sensitive plants and 13 were responsive to drought in drought-tolerant plants (Figs. 5a and 6). 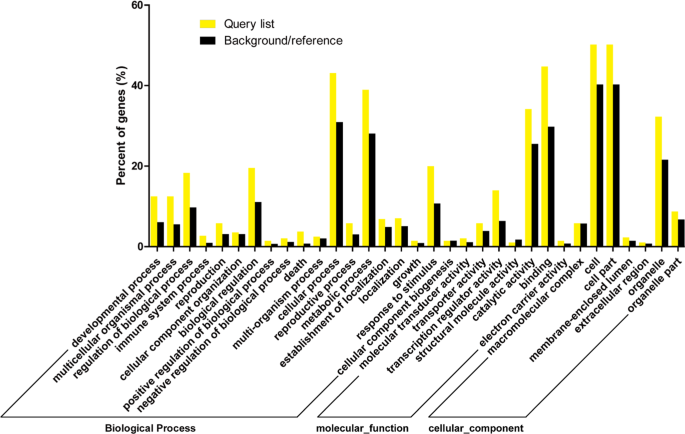 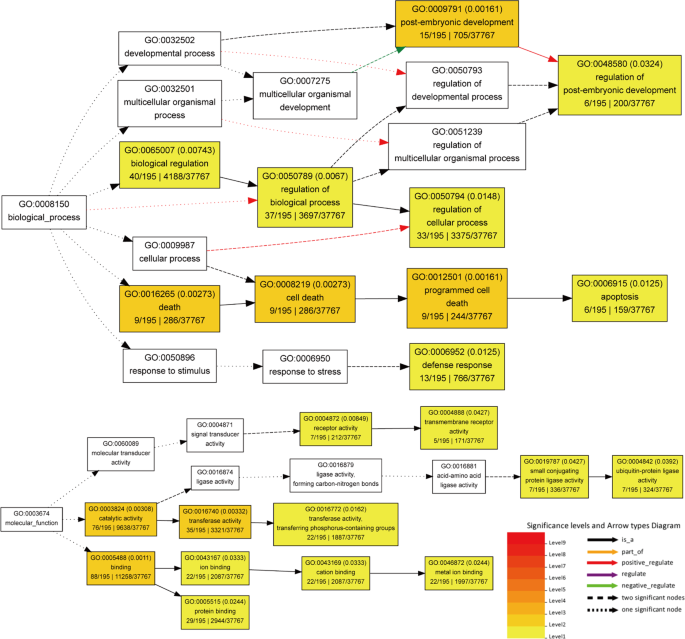 Target genes of 67 differentially expressed miRNAs in the drought-tolerant plants compared with the drought-sensitive plants under drought were used in agriGO analysis. Significant terms are indicated in red, with darker shades reflecting greater significance

Expression verification of miRNAs and their targets by qRT-PCR

Fig. 10: Expression of the targets of differentially expressed miRNAs by qRT-PCR. 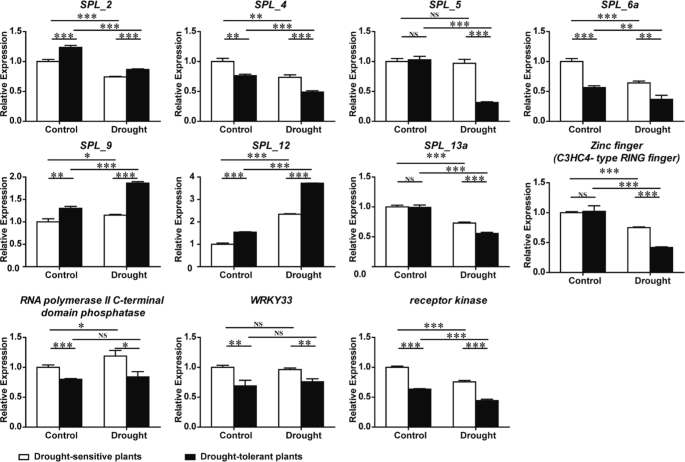 Function verification of miRNAs in response to osmotic stress

To verify the function of these miRNAs, we selected two miRNAs, miR156p and miRn-249, and generated transgenic calli carrying 35S:MIR156p or 35S:MIRn-249. As drought stress could cause osmotic stress in plants, we treated the WT and transgenic calli with 150 mM mannitol. Stem-loop qRT-PCR analysis demonstrated that miR156p was upregulated ~400-fold in the transgenic calli compared with that in WT calli and 10-fold for miRn-249 in miRn-249 transgenic calli (Fig. 11a). When treated with 150 mM mannitol for 3 weeks, the relative growth rate of miRn-249 and miR156p transgenic calli was higher than that of WT (Fig. 11b), suggesting positive roles for these two miRNAs in osmotic stress tolerance. We also detected the expression levels of the target genes of these two miRNAs. Our results showed that four target genes of miR156 (SPL_6a, SPL_9, SPL_12, and SPL_13a) were repressed by elevated miR156p expression (Fig. 11c). However, the expression of SPL_2 and Zinc finger (C3HC4-type RING finger), which were predicted as the targets of miR156 and miRn-249, respectively, was not reduced in miR156p or miRn-249 transgenic calli (Supplementary Fig. S4). 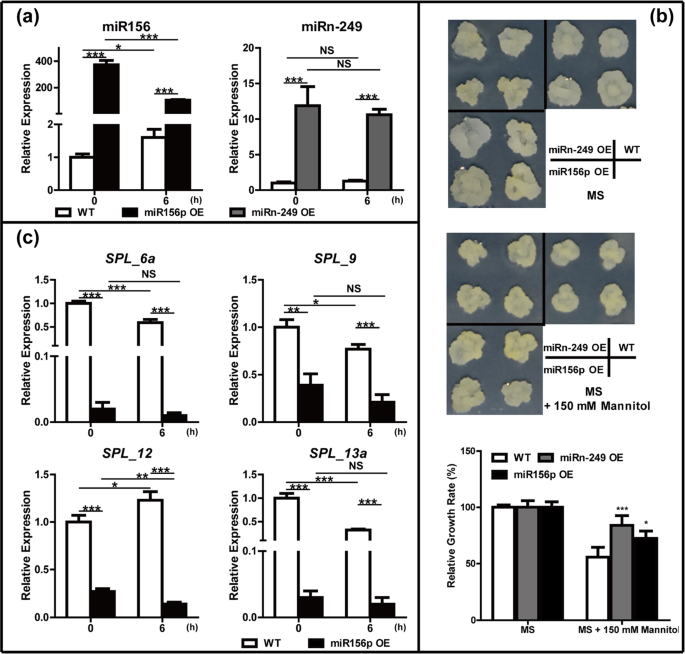 a Expression levels of miR156p or miRn-249 in overexpressing calli under control and 150 mM mannitol treatment for 6 h. b Morphology of the calli after culture for 3 weeks on MS medium (upper) or MS medium supplemented with 150 mM mannitol (middle), and relative growth rate between them (under, error bars indicate ±SD, n ≥ 10). c Expression levels of the miR156p target genes under control and 150 mM mannitol treatment for 6 h. Stem-loop qRT-PCR and qRT-PCR used MDH (malate dehydrogenase) as an internal reference gene, error bars indicate ±SD (n = 3, from three technical replicates) and three biological replicates were performed. Student’s t-test was performed for data, and statistically significant differences were indicated by *p-value < 0.05, **p-value < 0.01, and ***p-value < 0.001