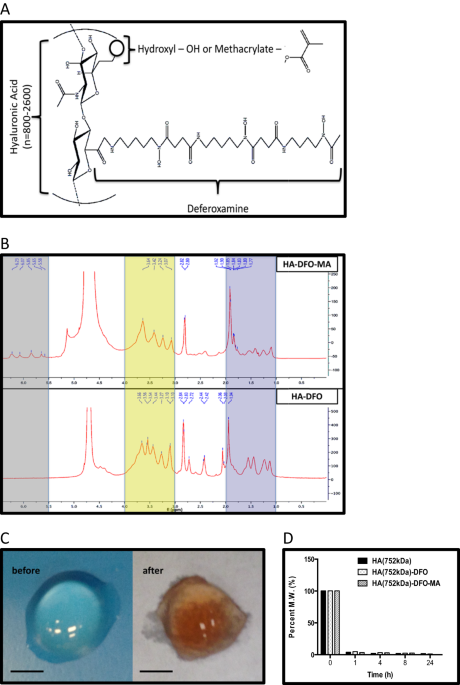 HA-DFO is produced by conjugating HA (0.2–1MDa) and DFO (10–15% w/w) utilizing [1-Ethyl-3-(3-dimethylaminopropyl)-carbodiimide] (EDC). EDC is a zero-length crosslinking agent used to couple carboxyl or phosphate groups to primary amines. The chemical modification of HA can be performed utilizing this method to conjugate DFO at its carboxyl region and forms a prodrug that is later cleaved at its target site. Methacrylated HA-DFO (HA-DFO-MA) was synthesized in order to facilitate crosslinking and further modify the degradation profile. MA was first attached to the carboxylic acid groups of the HA-DFO (752 kDa)-DFO conjugate following a procedure reported elsewhere with some modifications.43 Briefly, approximately 100 mg of the HA-DFO (17.8%, w/w) was dissolved in 7-mL ddH2O and then one molar equivalent of methacrylic anhydride was added in the solution with gentle stirring. The pH of the mixture was kept at 8 using a 2.5-N sodium hydride. The reaction was carried out at room temperature for 2 h, followed by storing at 2–8 °C overnight. Afterwards, the mixture was transferred into the dialysis tubing and dialyzed against ddH2O for 3 days. The dry form of the HA-DFO-MA was obtained via lyophilization. A stock solution of 10% w/v of Irgacure 2959 was freshly prepared in an ethanol-acetone mixture (70/30; v/v). Two microliters of Irgacure 2959 was added into 1 mL of HA-DFO-MA (10 mg/mL) in ddH2O at a concentration of 10-mg/mL, and the mixture was gently vortexed for 30 s. Approximately a 100-μL aliquot was transferred into the 96-well cell culture plate, which was subsequently exposed to UV lamp at a wavelength of 365 nm for 20 minutes.

The HA (752 kDa)-DFO or HA (752 kDa)-DFO-MA was dissolved in deuterium oxide (D2O) and their 1H NMR spectra were collected on a Bruker Avance 400 MHz NMR Spectrometer (Bruker Corporation, MA, USA).

The quantification of DFO in the HA-DFO-MA conjugate was determined spectrophotometrically by converting the methacrylated HA-DFO to the iron-saturated ferrioxamine using a modified method.44 Three mM of iron (III) chloride (FeCl3) was incubated with a series of standard solutions of DFO (0.05–0.5 mg/mL), 1-mg/mL HA (215 kDa or 752 kDa)-DFO-MA at ambient temperature overnight, followed by recording the absorption at 430 nm using a UV microplate reader (SpectraMax Gemini; Molecular Devices, Sunnyvale, CA). The amount of DFO in the formulation was determined by quantitating respective HA-DFO-MA generated ferrioxamine species with the calibration curve of the ferrioxamine standard solutions prepared from unmodified DFO.

Approximately 100 μL of HA (752 kDa)-DFO-MA was incubated with 500 μL 3-mM FeSO4 in a 1.5-mL Eppendorf tube, and the mixture was shaken overnight on an orbital shaker at 50 rpm overnight. The preparation was photographed before and after iron incubation to observe oxidation.

The kinetics of enzymatic degradation of HA was studied by monitoring the molecular weight change. First, 1 mg/mL of unmodified HA (752 kDa), HA (752 kDa)-DFO or methacrylated HA (752 kDa)-DFO solutions was prepared in 4 mL of PBS (10 mM, pH7.4), and then hyaluronidase solution (10 μg/mL) was added into the reaction system. While the mixture was incubated at 37 °C, the molecular weights of 100-μL aliquots of the samples were monitored by gel-permeation chromatography (GPC) at 25 °C on a Shimadzu 2010CHT with a refractive index detector (RID-10A, Shimadzu Scientific Instruments, KS), using a Shodex OHpak SB-806 HQ column (Showa Denko America, Inc., New York, NY) with 5-mM ammonium acetate as the mobile phase at a flow rate of 0.8 mL/min.

HUVECs near confluence were radiated using a Philips RT250 orthovoltage unit (250 kV X-rays, 15 mA; Kimtron Medical, Woodbury, CT), which delivers ionizing radiation through a filtered system. The cells were exposed to a dose of 5 Gy of radiation in a single fraction according to previously established protocols proven to successfully impair the growth and development of cellular cultures.

Matrigel (BD Biosciences, Franklin Lakes, NJ) was thawed and placed in eight-well chamber slides at 37 °C for 30 min to allow for solidification. Then, control, radiated, or DFO-radiated HUVEC cells (48,000 cells per well) were plated on Matrigel with 200 µL of 25% HUVEC proprietary media and 75% RMPI 1640 media. Cells were then incubated at 37 °C under 23% oxygen for 4 h. Variable formulations and doses of DFO were administered as follows: 50 µM DFO, 50 µM HA-DFO, 100 µM HA-DFO. All DFO was administered at the time of incubation. Cultures were recorded in real time with live cell imaging and photographed every hour for the duration of the experiment. Tubule formation was defined as a structure exhibiting a length four times its width and was analyzed in 10 random fields per well using an inverted Leica DMIL light microscope (Leica Microsystems, Wetzlar, Germany) at 100x magnification. Experiments were performed with a sample size of n = 6, and all data was quantified by three blinded, independent reviewers.

In vivo study design and animal use

All animal experimentation was conducted in accordance with the guidelines published in the Guide for the Care and Use of Laboratory Animals: Eighth Edition.45 Protocols were approved by the University of Michigan’s Committee for the Utilization and Care of Animals (UCUCA) prior to implementation. Twelve-week-old male Sprague Dawley rats (n = 46) weighing approximately 400 g were acclimated for 7 days in light and temperature-controlled facilities and given food and water ad libitum. Rats were divided into four groups: Fx (control fracture, n = 5), XFx (irradiated fracture, n = 15), iDFO (irradiated fracture + injected deferoxamine, n = 15) and HA-DFO (irradiated fracture + hyaluronic acid-deferoxamine implanted at the time of surgery, n = 11). On day seven, rats underwent fractionated radiotherapy over a 5 day-period followed by a recuperation period of 14 days prior to surgery. During recovery, animals were acclimated to a soft chow high-calorie diet (Hills-Columbus Serum; Columbus, Ohio) to ensure adequate food intake and nutrition in the post-radiation and post-operative periods. Subsequently, animals underwent osteotomy, DFO injection/implantation and a 40-day consolidation period as outlined prior to dissection, bony union analysis, µCT imaging and biomechanical testing. All 46 animals completed the study, however, two animals in the XFx group had severely comminuted mandibles which precluded subsequent imaging and biomechanical testing. They were non-unions and thus still considered in the bony union analysis. Additionally, we powered the experiment based on expected magnitude of effect of the variables in question given our previous experience working with this radiated fracture model, so that the groups were not equal at the start of the experiment, as reported. Each measurement was taken from each distinct sample.

All radiation procedures were conducted in the Irradiation Core at the University of Michigan Cancer Center. After transient induction of anesthesia with an oxygen/isoflurane mixture, left hemi-mandibles were radiated using the Philips RT250 orthovoltage unit. Our selected region of interest (ROI) spans a 2 mm distance posterior to the third molar and correlates to the future site of surgically created osteotomy. Lead shielding is provided to ensure localized delivery and protection of surrounding tissues. A previously described Human Equivalent Dose of Radiation (HEDR) developed with the guidance of the department of radiation oncology at the University of Michigan was utilized.46,47,48 Briefly, a fractionated dose of 7 Gy per day was administered over 5 days for a total of 35 Gy. This is comparable to 70 Gy in human mandibular high-dose radiotherapy. This dose was designed to predictably replicate pathologies analogous to those observed in the setting of clinically advanced mandibular osteoradionecrosis, while taking the diminutive size of the mandible and surrounding tissues into consideration.

The dose and delivery method of iDFO used in these protocols was derived from an extensive literature search regarding its use in long bone mouse models and the subsequent advancement of our experimentation with this drug over recent years.22,23,24,25,26,27,28,29 We have modified the reported dose to accommodate the larger volume of the rat mandible in our animal model. DFO (200 µM in 300 µL NS) was given as a local injection directly into the fracture site every other day starting on post-operative day 4 and continuing through post-operative day 12. This time frame was chosen to correlate with the reasonable time for initiation of angiogenesis in a murine fracture model.8,9,10 HA-DFO was implanted at the osteotomy site along the severed bone edges at the time of surgery. The dose of DFO loaded on the HA scaffold for delivery was calculated at 1000 µM which is equivalent to the 5 injections of DFO (200 µM each injection) given in our standard localized injection method.

Gentamycin (30 mg/kg SQ) was given prophylactically before surgery and twice post-operatively. To ensure adequate analgesia, hydration and anesthesia, rats were given buprenorphine (0.15 mg/kg SQ) along with Lactated Ringers Solution (25 cc/kg SQ), and then anesthetized using an inhalational isoflurane/oxygen mixture throughout the surgical procedure. Post-operatively, animals were placed on warming blankets and monitored for heart and respiratory rates. Post-operative analgesia with buprenorphine was continued twice daily until POD 4, and as needed thereafter. Weight gain, porphyrin staining, food and fluid intake were assessed to determine the need for continued analgesia.

After standard preparation and draping a 2 cm midline incision was placed ventrally from the anterior submentum to the neck crease. After drilling a 1.1 mm hole a 1.5” #0–80 stainless steel rod was threaded horizontally across the anterior mandible and both ends brought externally through the skin, creating the anterior portion of our modified external fixator device. Bilateral holes were then drilled 2 mm anterior and superior to the mandibular angle, a #0–80 threaded pin was secured through a washer and brought externally through the skin for the posterior fixator placement. After stabilization of the fixator, a vertical osteotomy was created using a10 mm micro reciprocating blade (Stryker) ~2 mm anterior to the posterior washer on the left hemi-mandible, extending from the inferior margin of the mandible superiorly to the sigmoid notch along the anterior aspect of the coronoid process. After reduction of the osteotomy edges, hemostasis was verified, and incisions were closed in layers. Four hours after osteotomy, the fixator device was set to a 2 mm fixed distance for the length of the experiment as previously described.49

Micro-CT (GE Healthcare Biosciences) images were obtained using 80 kVp, 80 mA and 1100 ms exposure at a resolution of 45-micron voxel size for bone analysis. The individual scans were reconstructed and reoriented in a three-dimensional x, y and z plane, then several rotations and cropping of non-bone space were undertaken for uniformity. The region of interest was selected correlating to the region of fracture healing, 2 mm directly behind the third molar. Using Microview software the ROI was then highlighted and analyzed for bone mineral density (BMD), tissue mineral density (TMD) and bone volume fraction (BVF).

Pins were inserted perpendicularly through the hemi-mandibles at both existing anterior and posterior pin-site holes. The posterior and anterior aspects of the mandible were potted using a Cerrobend Bismuth alloy. The mandible was positioned inside the pot with the inferior edge of the mandible perpendicular to the top edge of the pot. Using a servohydraulic-testing machine (858 Mini Bionics II; MTS Systems), potted hemi-mandibles were loaded to failure using tension at a constant displacement rate of 0.5 mm/s. Displacement was monitored with an external linear variable differential transducer (LVDT; Howard A. Schaevitz Technologies). The load and displacement data were acquired using the TestStar IIs system (version 2.4; MTS) at a sampling frequency of 200 Hz. A custom LabVIEW script was used to analyze the raw force-displacement data. Load-Displacement curves were analyzed for stiffness (S), and failure load (FL).

En-bloc dissection of mandibles allowed for assessment of bony union. This was clinically defined as the absence of movement across the regenerate site on manual manipulation of the regenerate gap after removal of the fixator device. Union status was subsequently verified with micro-computed tomography (μCT) imaging where possible.

UCalgary research delivers new insights into how skin can regenerate after...

Childhood obesity could increase the risk of multiple sclerosis