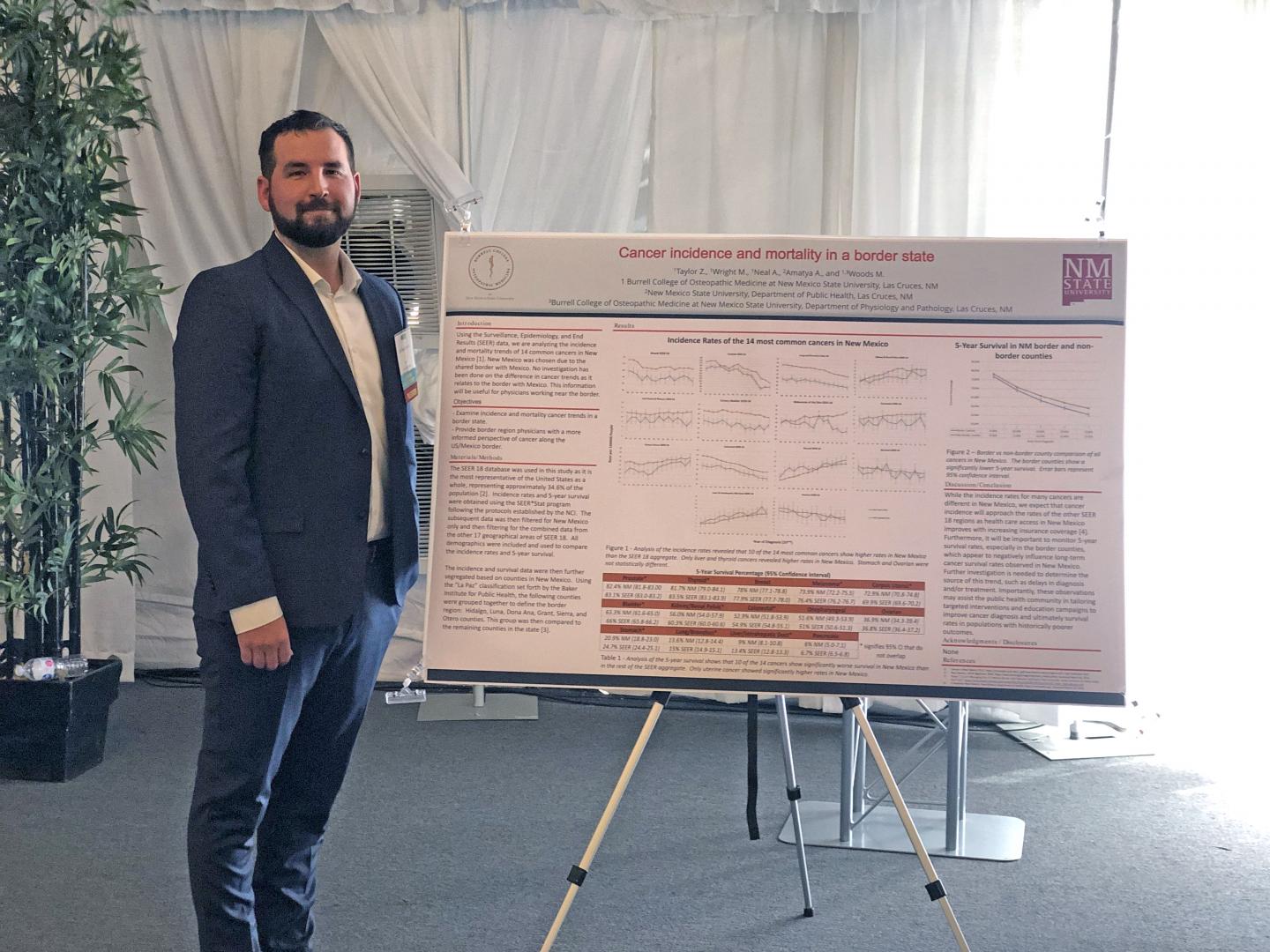 A study by researchers at the Burrell College of Osteopathic Medicine shows that cancer patients in New Mexico have a significantly lower five-year survival rate for 10 of the 14 most common cancers. Those living on the U.S.-Mexico border fare even worse.

Las Cruces, NM — Researchers at the Burrell College of Osteopathic Medicine (BCOM) have found that cancer patients in New Mexico have lower chances of survival when compared to the rest of the nation.

The research was presented by third-year medical student Zac Taylor at the annual meeting of the Arizona Osteopathic Medical Association (AOMA). It was awarded first place among all poster presentations.

“Our preliminary data indicates that some populations, namely Hispanics living in the border region, may have a lower five-year survival rate for some types of the cancers, and there appears to be an association with the stage of the cancer at diagnosis,” says Michael Woods, PhD, BCOM assistant professor of physiology and pathology who oversaw the research. “There could be several reasons for this, including access to health care or other societal factors that we don’t fully understand yet.”

For the project, the team sifted through cancer statistics collected by the National Cancer Institute’s Surveillance, Epidemiology and End Results (SEER) program. SEER specifically collects and publishes cancer incidence and survival data, such as disease type and stage and patient treatment and outcomes. The database represents 34.6 percent of the U.S. population.

BCOM researchers analyzed the U.S. incidence and five-year survival rates for patients with 14 of the most common cancers, including breast cancer, stomach cancer and prostate cancer.

They then narrowed in on the data for the state of New Mexico. Cancer incidence and survival rates were broken down further by counties located on the U.S-Mexico border, which were defined as Hidalgo, Luna, Dona Ana, Grant, Sierra and Otero counties.

When compared to the national average, the results revealed that New Mexicans with 10 of the most common cancers–prostate, thyroid, melanoma, bladder, kidney, colorectal, stomach, lung, liver and pancreas–have a significantly worse 5-year survival rate.

Those living in New Mexico along the U.S.-Mexico border have even higher cancer mortality rates, with an average five-year cancer survival rate of 55.8 percent compared to the New Mexico average of 59.3 percent.

For his presentation and research, Taylor received a $750 prize as well as a plaque from the AOMA.

“I felt that the project would be interesting to Arizona physicians since Arizona also shares a border with Mexico,” Taylor says. “It was great to be recognized for the work that we have been doing here at BCOM.”

The team hopes their findings can help with public health efforts in New Mexico, such as creating targeted interventions and health education campaigns to improve cancer diagnosis and ultimately, survival rates, in populations with historically poor outcomes.

About the Burrell College of Osteopathic Medicine:

Located in Las Cruces, New Mexico, the Burrell College of Osteopathic Medicine (BCOM) was established in 2013 to improve the health of the Southwestern U.S. and Northern Mexico. The four-year, private osteopathic medical school is student-centered, utilizing the latest medical education technologies and methods to ensure student success in all fields of medicine — from primary care to subspecialties like surgery, anesthesiology and emergency medicine. BCOM is a freestanding college located on the New Mexico State University campus. Learn more at bcomNM.org.

The European Fight Against The Covid-19 Coronavirus