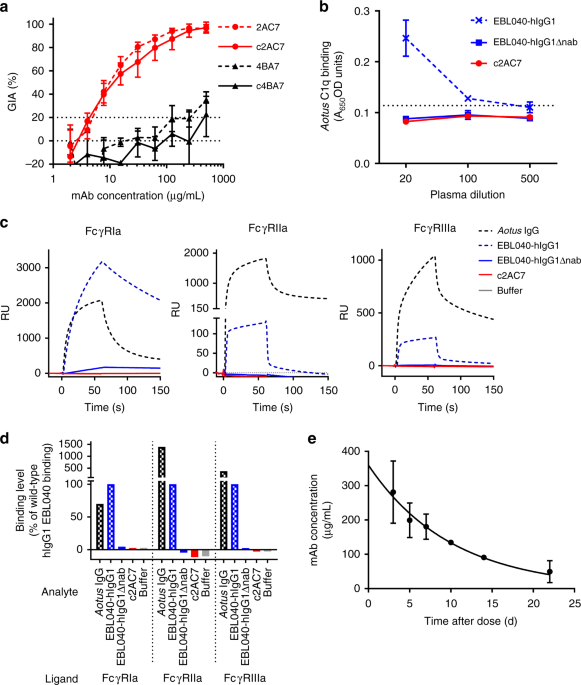 We previously described production of 2AC7 and 4BA7 anti-PfRH5 murine hybridomas18. mRNA isolated from the hybridomas was used as a template to RT-PCR amplify the respective antibody rearranged variable heavy and light chains34. Heavy- and light-chain variable region coding sequences were then gene synthesized (Thermo Fisher) and subcloned into transient mammalian expression vectors in frame with the hIgG1Δnab20 or hIgCκ chain constant sequences as appropriate.

Isolation of the plasmids encoding the light and heavy chains of the human IgG1 monoclonal EBL040, directed against Ebola virus glycoprotein, has been reported elsewhere35. The EBL040 VH and VL sequences were subcloned using InFusion (Clontech) into mammalian expression vectors in frame with hIgG1Δnab20, wild-type hIgG1 (to produce the EBL040 with wild-type hIgG1, used only in Fig. 1b–d) or hIgCκ chain constant sequences.

Binding of mAbs to Aotus nancymaae C1q and Fcγ receptors

C1q binding was assessed by ELISA. Maxisorp plates (ThermoFisher) were coated overnight with EBL040-hIgG1, EBL040-hIgG1∆nab, or c2AC7 mAbs (50 µL at 5 µg/mL in phosphate-buffered saline [PBS]), and blocked for 1 h with Blocker Casein (ThermoFisher). A dilution series of pooled plasma from mAb-naïve A. nancymaae (5-fold from a 1:20 starting dilution) was applied for 2 h, followed by application of horseradish-peroxidase-conjugated sheep anti-human C1q polyclonal antibody (Abcam ab46191, diluted 1:100 in Blocker Casein) for 1 h. Plates were developed with TMB substrate (ThermoFisher) for 1 h and absorbance was measured at 650 nm on a Clariostar reader (BMG).

FcγRIa, FcγRIIa, and FcγRIIIa were selected for study from the set of Fcγ receptors on the basis that these are the major ‘activating’ effector-function mediating Fcγ receptors in humans36. Predicted mRNA sequences encoding A. nancymaae homologs of these human receptors were identified by searching NCBI data arising from the Owl Monkey Genome Project (Baylor College of Medicine Human Genome Sequencing Centre; https://www.hgsc.bcm.edu/non-human-primates/owl-monkey-genome-project). Sequences retrieved (NCBI accession numbers XM_012442107.1, XM_012449596.1, XM_012449592 and the corresponding predicted protein sequences XP_012297530.1, XP_012305019.1 and XP_012305015.1) were BLAST aligned against human receptor reference sequences (Uniprot P12314, P12318, P08637). Probable Aotus receptor ectodomain sequences were inferred from the alignments, corresponding to amino acids 54–345 of XP_012297530.1 for Aotus FcγRIa, amino acids 1–216 of XP_012305019.1 for FcγRIIa, and amino acids 103–310 of XP_012305015.1 for FcγRIIIa. In the cases of FcγRIa and FcγRIIIa, the first amino acids of the selected regions aligned with the human orthologs, while the predicted N-terminal portions of the Aotus protein sequences did not align with the N-terminus of the human orthologs and are likely to have represented erroneous bioinformatics predictions. The coding sequences for the predicted Aotus receptor ectodomains were synthesized with flanking NotI and AscI restriction enzyme sites (Thermo Fisher), and subcloned into a previously reported pTT3-based vector supplying C-terminal tag sequences (rat CD4 domains 3 and 4, biotin acceptor peptide, and hexa-histidine (6xHis))37. Biotinylated receptor protein was produced by transient co-transfection of HEK293F cells with these plasmids and a plasmid encoding the BirA biotin ligase37. Harvested cell supernatant was dialyzed extensively against PBS.

The experiments reported herein were conducted in compliance with the Animal Welfare Act and in accordance with the principles set forth in ref. 39. The study protocol was approved by NAMRU-6’s Institutional Animal Care and Use Committee (protocol number NAMRU-6 14-06); the Department of the Navy Bureau of Medicine and Surgery (NRD-927); the University of Oxford’s central committee on Animal Care and Ethical Review (ACER); and the Institut Nacional de Recursos Naturales (INRENA) at the Peruvian Ministry of Agriculture.

Adult female owl monkeys (A. nancymaae) were housed at the US Naval Medical Research Unit No. 6 (NAMRU-6), Lima, Peru. Intravenous (i.v.) administration of antibodies and parasites and withdrawal of blood samples from the saphenous vein was performed under ketamine anesthesia. EDTA-anticoagulated blood was prepared using standard methods to obtain plasma and in some cases PBMC.

In a preliminary study to assess mAb pharmacokinetics, n = 2 Aotus were administered a 30 mg/kg i.v. bolus of chimerized anti-PfRH5 mAb c4BA7. Plasma samples were collected at intervals up to day 22; mAb concentrations measured by ELISA (see below); and a single-phase exponential decay model was fitted to data collected from day 3 onward to estimate terminal elimination half-life. On day 7 of this preliminary study, one animal additionally received an anti-CD20 mAb (Arzerra, GSK), as part of a concurrent study to be published separately; exclusion of data collected after that administration altered the point estimate of the fitted half-life by less than 1 day.

For challenge studies, randomization to groups was stratified by prestudy weight and gender. Animals were challenged i.v. on day 0. Challenge inocula comprised 104 FVO-strain P. falciparum iRBC taken from a donor monkey40. Immediately after administration of the challenge inoculum and a PBS flush, the appropriate dose of mAb was administered i.v. in 2 mL of PBS. Additional doses of mAb, each half the initial dose given to that animal, were administered on days 7 and 14. Antibodies and doses were as set out in figure legends; passively transferred EBL040 mAb also had the hIgG1Δnab Fc.

From day 3, daily thin-film parasitemia quantification and alternate-day Hct measurements were conducted. Animals were treated when (i) parasite density reached ≥200,000/μL; or (ii) Hct fell to ≤25% (severe anemia is a common complication of poorly controlled malaria infection in Aotus); or (iii) upon reaching challenge day 35 if no other treatment endpoint had been reached.

Plates were developed with para-nitrophenyl-phosphate substrate (Sigma) in diethanolamine buffer (ThermoFisher) and read using an ELx800 instrument (Biotek). Conversion to plasma concentration was made by comparison of OD readings to a dilution series of the appropriate mAb or protein G-purified Aotus IgG43.

For Fig. 3c, time-weighted mean (TWM) mAb concentrations were calculated from the ELISA data by using the trapezoidal rule to find area under the curve between each assay timepoint and dividing by the time intervals; in the absence of measured peak (day 0) levels, a constant rate of decay from day 0 through the measured values at days 3 and 7 was assumed.

Assays of GIA were performed using the FVO parasite line1. Assays using purified mAb to assess function after chimerization (results in Fig. 1a) were performed in the Jenner Institute Laboratory. Assays using Aotus samples (results in Fig. 3e) were performed at the GIA Reference Center Laboratory, NIAID, NIH. IgG was purified from pooled plasma samples of 100 µL from each of a pair of monkeys (within the same mAb treatment group), collected on day 10 after challenge. Both laboratories used the GIA Reference Centre’s method, involving single-cycle parasite growth and colorimetric detection of parasite lactate dehydrogenase1.

High tunnels for specialty crops: The hope and the hinderance