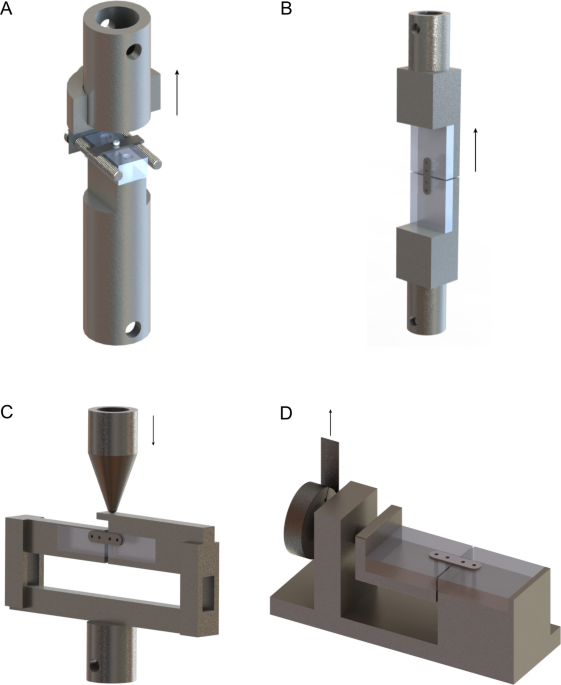 The aim of this study was to be able to guide surgeons in the selection of osteosynthesis systems. We determined and compared the mechanical properties of biodegradable and titanium osteosynthesis systems used in OMF-surgery. The pull-out load of the SonicPins Rx and xG systems was comparable, irrespective of whether the burr hole was tapped or not. The CrossDrive (2018) and MaxDrive titanium systems demonstrated lower tensile and torsional stiffness accompanied with higher ductility than the corresponding CrossDrive (2006) systems. The side bending stiffness of the 1.5 mm titanium systems was comparable to, and that of the 2.0 mm systems was higher than, the biodegradable systems. Regarding the biodegradable systems, the Inion CPS 2.5 mm had the highest tensile load and torsional stiffness, all the SonicWeld 2.1 mm systems had the highest tensile stiffness, and the BioSorbFX 2.0 mm had highest side bending stiffness. On the basis of the results of this study recommendations are made and discussed below which biodegradable and titanium osteosynthesis systems are preferably used for fracture and osteotomy fixation in OMF-surgery (Table 4).

The mechanical properties of osteosynthesis systems depend on several factors including composition (i.e., titanium (alloys) or (co-)polymers), the production processes of titanium systems (e.g., stamping versus laser cutting)31,32,33, dimensions, self-reinforcing of polymers34, the application method (i.e., screws or thermoplastic pins)12, ageing, and sterilization methods35,36,37. Self-reinforcing polymers is a manufacturing technique whereby the polymers are orientated in reinforcing units, such as fibrils or fibers, and the binding matrix has the same chemical structure34. This high degree of molecular orientation results in improved mechanical properties compared to identical polymers and dimensions38.

The plate and screw dimensions are important characteristics when evaluating mechanical properties of osteosynthesis systems. In particular, the tensile load and torsional stiffness increase significantly when the cross sectional area increases as shown by the results of the Inion CPS 2.0 versus 2.5 mm systems39. The effects of self-reinforcing polymers is demonstrated by the differences in the mechanical properties of the BioSorb FX 2.0 mm (SR 70/30 PLLA/PDLLA) and Polymax 2.0 mm (70/30 PLLA/PDLLA) systems. Furthermore, the effect of the application method (i.e., melting of thermoplastic pins in the plates compared to usage of screws) is demonstrated by the mechanical properties of the Resorb X (100% PDLLA with screws) compared to the SonicWeld Rx/Rx (100% PDLLA with thermoplastic pins) systems. Additionally, the origin of the failure of all the SonicWeld systems shows that melting the pins within the plates causes a shift of the weakest link of the complete osteosynthesis system from the screw-plate interface (i.e., all other biodegradable systems) to the plate itself (i.e., SonicWeld and titanium systems).

Several studies have assessed the mechanical forces surrounding osteosyntheses applied to maxillofacial fractures28,40,41,42,43,44, osteotomies45,46 and reconstructions47. After maxilofacial trauma, the reported bite force at fracture fixation increases up to 64 N by the second postoperative day, 92 N after 1 week, 187 N after 4 weeks, and to 373 N at the 3-month follow-up40. Other studies focusing on trauma patients showed that 100 N forces were measured after 4 weeks of fixation41,43. The mechanical forces around maxillofacial osteotomies have been reported to increase from 21 ± 14 N (i.e., after 1 week) to 65 ± 43 N (i.e., after 6 weeks)42 while other studies report forces ranging from 82.5 to 132N45,46. The masticatory forces after mandibular reconstructions range from 28 to 186N47. These reported data indicate that the mechanical properties of all the titanium and most of the biodegradable osteosynthesis systems are sufficient for adequate fixation. However, the mechanical stress surrounding osteosynthesis systems is multi-factorial and is affected by the location of the fracture, differences in interfragmentary stability (i.e., of fractures), mandibulair height (i.e., following fractures, osteotomies and reconstructions), degree and direction of movement (i.e., after an osteotomy), and preoperative mastericatory forces29,41,48. Additionally, as bone healing progresses, the forces will be shared by the osteosynthesis system and the underlying bone. Therefore, it remains difficult to estimate the least mechanical properties an osteosynthesis system has to meet.

Three important aspects have to be noted before recommendations for clinical use can be made. First, it must be noted that statistical differences do not imply clinically relevant differences. Second, the stiffness of an osteosynthesis system is a more clinically relevant outcome than load since this affects adequate fixation and bone healing (i.e., malunion and non-union)56 while tensile load is only relevant whenever the bone segments have been separated by more than a few millimeters. In the latter case, this will certainly result in compromised bone healing or malunion. Thirdly, although extreme tensile stiffness is a concern in titanium systems due to stress shielding, it is not a concern when using biodegradable systems as they undergo bulk degradation thereby decreasing their mechanical properties with time13.

When there is an indication for a biodegradable osteosynthesis system, the SonicWeld Rx/Rx 2.1 mm or BioSorbFX 2.0 mm systems are recommended to fixate midface fractures (e.g., zygomatic or maxillary fractures) and osteotomies (e.g., Le Fort I osteotomies) due to their high tensile and side bending stiffness, respectively (Table 4)57,58. Both systems have their own advantages regarding perioperative handeling, viz., the possibility to adapt the BioSorb FX plate at room temperature34 and the avoidance of tapping the burr holes when using the SonicWeld system57. When also considering the dimensions and volumes, and the (co-)polymer compositions of these two systems, the SonicWeld Rx/Rx system is preferred as it is less bulky (i.e., − 14% in volume) and has a more favourable degradative copolymer composition13,59. Whenever low pull-out forces are expected, we recommend not tapping the SonicPins burr holes as this remains an extra perioperative, time-consuming step for surgeons9. On the other hand, whenever high torsional forces are expected (e.g., fixating mandibular symphysis fractures41), the Inion CPS 2.5 mm system is recommended although it might be bulky due to the plate and screw dimensions. Whenever the bulkiness of this system is considered an issue (e.g., complicating stress free closure of the incision or due to palpability), the BioSorb FX 2.0 mm is a suitable alternative (i.e., − 58% in volume; Table 4). Only two of the tested biodegradable osteosynthesis systems (i.e., Inion CPS 2.5 mm and OsteotransMX 2.0 mm with plate thickness of 1.4 mm) are certified to be used for mandibular osteotomies and non-load bearing mandibular fractures other than mandibular symphysis fractures59,60. Therefore, as the OsteotransMX 2.0 mm has insufficient mechanical properties to be tested in our study, we recommend the Inion CPS 2.5 mm system for fixation of mandibular osteotomies (e.g., bilateral sagittal split osteotomy) and non-load bearing mandibular fractures other than symphysis fractures (Table 4). However, it must be noted that, although the mechanical propterties of the Inion CPS 2.5 mm system are sufficient for for fixation of mandibular osteotomies, a randomized controlled trial reported a significantly higher symptomatic plate removal risk of the Inion CPS 2.5 mm compared to the CrossDrive (2018) 2.0 mm titanium system after fixation of BSSOs2. Therefore, when choosing an appropriate osteosynthesis system for fixation of mandibular osteotomies, we recommend OMF-surgeons to take both aspects (i.e., the mechanical properties and the risk of symptomatic plate removal) into account.

This is the most comprehensive study to date comparing various commonly used titanium and biodegradable osteosynthesis systems in OMF-surgery. Other strengths of this study are the standardized and reproducable osteosynthesis systems application methods (e.g., screws inserted using the mean applied torque by four experienced OMF-surgeons), usage of standardized test setups, and the assessment of a variety of outcomes that are relevant to clinical practice (i.e., tensile and pull-out load, and tensile, pull-out, side-bending, and torsional stiffness). Additionally, to ensure comparability, all the osteosynthesis systems were applied by one researcher (BG) while the tests were performed by another researcher (CCR). Furthermore, PMMA was chosen instead of bone blocks for all the tests because the variability in bone mineral density, in cortical and spongious bone layer thickness, and in block dimensions impede the latter’s use as a standardized and reproducible model as these factors may confound the results of the mechanical tests. The mechanical properties of PMMA are similar to bone22,23,24, the quality of each PMMA-block is similar (i.e., no variability in density), and blocks with identical dimensions can be easily fabricated, which ensures standardization and reproducibility of the test setups.

A limitation of this study is that the insertion of the SonicPins could not be quantified, as was done with the torque applied to the screws, because the pins are melted into the burr holes. We tried to address this by having one researcher (BG) insert the pins and by using a minimum and maximum amount of time (i.e., one and two seconds per pin, respectively) as a quantifying measure of insertion. Furthermore, the Osteotrans-MX system could not be tested due to the screw heads failing before the screws were fully screwed in. This indicates that PMMA is not suitable for testing the screws’ mechanical properties. Using allo- or xenograft bone may address this limitation. However, we did not perform tests in bone due to the abovementioned limitations of bone and the fact that all the other osteosynthesis systems could be tested in PMMA, thus ensuring standardization and reproducibility of the test setups.

In conclusion, this study shows that the pull-out load and stiffness of SonicPinx Rx and xG are comparable and that tapping the burr hole does not improve the pull-out load and stiffness significantly. Furthermore, the KLS CrossDrive (2018) and MaxDrive titanium systems have significantly lower tensile and torsional stiffness, combined with higher ductility, than the corresponding CrossDrive (2006) titanium systems, while maintaining similar tensile load. The reduction in stiffness may reduce stress shielding of the underlying bone, although the clinical relevance of the reduction in stiffness was not investigated in this study. On the basis of the results of this study, the CrossDrive (2018) and MaxDrive 1.5 mm titanium systems are recommended for midface fractures (e.g., zygomatic or maxillary fractures) and osteotomies (e.g., Le Fort I osteotomy), and the CrossDrive (2018) and MaxDrive 2.0 mm titanium systems for mandibular fractures and osteotomies when a titanium osteosynthesis system is used. When there is an indication for a biodegradable osteosynthesis system, the SonicWeld 2.1 mm or BioSorbFX 2.0 mm are recommended for midface fractures and osteotomies, and the Inion CPS 2.5 mm biodegradable system for mandibular osteotomies and non-load bearing mandibular fractures, especially when high torsional forces are expected (e.g., mandibular symphysis fractures).

Artificial Intelligence: A Superpower in the Fight Against Covid-19