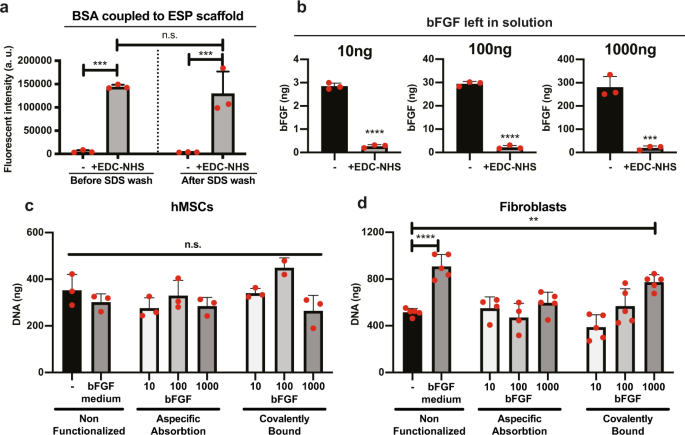 Random block co-polymer of poly(ethylene oxide terephthalate) (PEOT) and poly(butylene terephthalate) (PBT), with 300 Da PEG and PEOT/PBT ratio (w/w) of 55/45 (300PEOT55PBT45, acquired from PolyVation) was used to produce films and microfibrillar substrates. 300PEOT55/PBT45 granules were melted at 180 °C under slight pressure (~100 kg) in a circular 23 mm mold between two silicon wafers (Si-mat, Kaufering, Germany) to produce flat films. Films were punched out using a 22 mm punch to fit in a 12-well plate.

The electrospinning polymer solution was prepared by dissolving 20% (w/v) 300PEOT55PBT45 in 3:7 1,1,1,3,3,3,-Hexafluoro-2-propanol (HFIP):chloroform, overnight at room temperature under agitation. For heparin functionalization, 2% (w/v) poly(ethylene glycol) (PEG) with 2 NH2 end-groups (Mw: 3350 kDa) (PEG-NH2), was added to the polymer solution and mixed for 4 h before electrospinning.

ESP scaffolds (microfibrillar substrates) were produced on a slowly rotating (100 RPM) 19 cm diameter mandrel by electrospinning on a polyester mesh (FinishMat 6691 LL (40 gr/m2), generously provided by Lantor B.V.) with 12 mm holes, on top of aluminum foil. The following parameters were maintained: 15 cm working distance between needle and rotating mandrel, 1 ml/h flow rate, 23–25 °C and 40% relative humidity, a needle charge between 10 and 15 kV and collector charge between −2 and −5 kV. Individual ESP scaffolds were punched out with a diameter of 15 mm over the 12 mm holes in the polyester mesh and removed from the aluminum foil. This resulted in 15 mm ESP scaffolds with a 12-mm diameter surface for cell culture and a 1.5-mm polyester ring around it to improve handleability. Using this method, up to 100 microfibrillar substrates were produced under exactly equal parameters.

Before cell culture, microfibrillar substrates and films were sterilized in 70% ethanol for 15 min and dried at room temperature until visually dry. The 1.5-mm polyester ring was covered with a rubber 15 mm outer- and 12 mm inner-diameter O-ring (Eriks) to keep the scaffolds from floating in tissue culture well plates.

Functionalization of microfibrillar substrates with BSA or bFGF

Before coupling of bovine serum albumin (BSA)-FITC conjugate (ThermoFisher Scientific) or basic fibroblast growth factor (bFGF) (Neuromics), ethanol sterilized microfibrillar substrates were incubated in 0.5 M NaOH for 30 min at room temperature to open the ester bond of the 300PEOT55PBT45 polymer. Scaffolds were thoroughly washed five times with water and then incubated with 4 mg/ml N-(3-Dimethylaminopropyl)-N′-ethylcarbodiimide hydrochloride (EDC) (Sigma-Aldrich) and 10 mg/ml N-hydroxysuccinimide (NHS) (Sigma-Aldrich) in milliQ water, or in milliQ water only, without EDC-NHS, as negative control, for 30 min at room temperature on a rocking plate. EDC-NHS solution was removed and 500 µl of 1 µg/ml BSA or 20, 200, or 2000 ng/ml bFGF (thus in total 10, 100, or 1000 ng bFGF) in water was added to the scaffolds in a 24-well-plate well and incubated overnight at 4 °C on a rocking plate.

For BSA-FITC functionalization, the following day scaffolds were washed five times with water and scaffold fluorescence was measured in the fluorescein channel on a Clariostar plate reader (BMG Labtech). For sodium dodecyl sulfate (SDS) wash, 1% (w/v) in water was added to the functionalized scaffolds and incubated under agitation at room temperature overnight. The following day, scaffolds were thoroughly washed five times with water and measured on the plate reader as described before.

In all, 1.5 mg/ml heparin sodium salt from porcine intestinal mucosa (Sigma-Aldrich) was mixed with 4 mg/ml EDC and 10 mg/ml NHS in water (or water only, without EDC-NHS, as negative control) and directly added to the 300PEOT55PBT45 + PEG-NH2 microfibrillar substrates and incubated overnight at 4 °C.

Unless otherwise stated, all experiments were harvested at day 7. For scaffold experiments, hMSCs and fibroblasts were cultured at 1000 cells/cm2 in TCP and films, and 30.000 cells/microfibrillar substrate in growth medium with 100 U/ml penicillin-streptomycin. All other experiments were done in medium without penicillin-streptomycin. In bFGF medium conditions, 10 ng/ml bFGF was added to the medium.

To lyse cells for DNA quantification, cells were washed 2x with PBS and freeze-thawed dry twice before RLT lysis buffer (Qiagen) was added. Microfibrillar substrates were removed from the polyester ring after the last PBS wash. Samples were then freeze-thawed 3x in lysis buffer. TCP plates and films were scraped with a cell scraper after the first freeze-thaw in lysis buffer. Microfibrillar substrates were left in lysis buffer. Samples were diluted 100–400x, depending on expected number of cells per samples, in Tris-EDTA buffer (10 mM Tris-HCl, 1 mM EDTA, pH 7.5) and λ-DNA standard was made in the same final solution (0.25-1% RLT in Tris-EDTA buffer). Pico green assay (ThermoFisher Scientific) was then used to quantify DNA, according to the manufacturer’s protocol.

Protein was isolated in a custom lysis buffer to allow for the detection of membrane proteins with western blot. Other buffers, such as RIPA buffer, were tried for FGFR1 western blot without success. The buffer consisted of 150 mM NaCl, 0.5% sodium deoxycholate, 1% SDS, 1% NP-40, and 50 mM Tris-HCl in water, set to pH 7.4. The buffer was supplemented with cOmplete™ Mini EDTA-free Protease Inhibitor Cocktail (Sigma-Aldrich).

The statistical tests and number of biological replicates and/or experiments are stated in the figure subtexts. Each experiment used at least three biological replicas. Cells selected for quantification of focal adhesions were selected randomly. Films and electrospun scaffolds were also randomly assigned to different experimental groups. Shapiro–Wilk test was used to test for normal distribution of each experimental group before further statistical analysis. To test for significance of absolute differences in experiments with multiple comparisons between groups, a One-way ANOVA with Tukey’s post hoc was performed. For relative differences between multiple experimental groups, log values were used for repeated measures ANOVA, with Tukey’s post-hoc test. For experiments with a single comparison, two-tailed Student’s t test was used for absolute differences, and ratio–paired t-test for relative differences. Significance was set at p < 0.05. Statistical analysis was done using Graphpad Prism 8.

New COVID test doesn’t use scarce reagents, catches all but the...