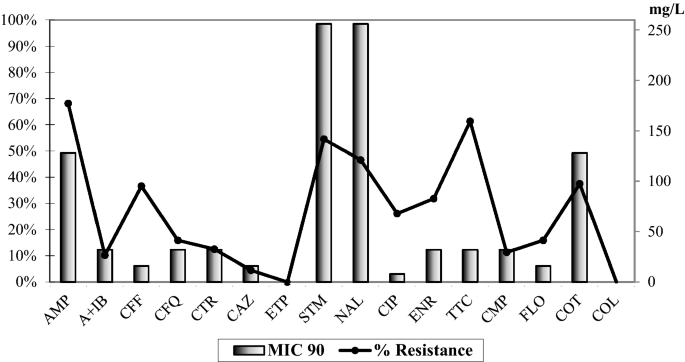 Critical control points in rendering plants with regard to high level contamination, bioaerosol production and the risk for the environment involve unloading of the raw material and wastewater treatment. In the unloading section of the rendering plant, the raw material is dumped from collecting containers of the transport vehicles to destructors. This is associated with potential aerosolisation of liquids, such as blood, intestinal contents and similar.

Antimicrobials used in poultry production have the potential to accumulate in poultry feathers and during the rendering process are not completely destroyed. Poultry feathers can be recycled to a feather meal and used as a fertilizer and animal feed, thereby providing a potential pathway for re-entry of drugs into the human food supply30.

Hofacre et al.31 found that a high percentage of feed samples for poultry containing meat and bone meal from rendering plant were contaminated by bacteria resistant to amoxicillin, ampicillin, cephalothin or clavulanic acid. Some samples contained bacteria resistant to kanamycin, trimethoprim/sulfamethoxazole or ciprofloxacin. The presence of mobile genetic elements mediate multi-drug resistance was proved in many of the isolated bacteria.

Higher than 30% prevalence among the 3rd-generation cephalosporin-resistant E. coli was detected mostly in poultry production32.

In our study we observed the highest incidence of beta-lactams resistance to ampicillin (68%), followed by cephalosporins—veterinary ceftiofur (36%), cefquinom (15.9%) and ceftriaxone (12.5%) while the beta-lactam resistance to ceftazidime was detected only in 4.5% of all strains.

ESBLs and AmpC beta-lactamases are usually responsible for the mediation of resistance to 3rd-generation cephalosporins in E. coli33.

The CMY-2-producing E. coli O25b-ST131 represent a clonal lineage that differs from the CTX-M-15-producing ST131-O25b cluster. ST131-O25b strains with the presence of ESBL-type CTX-M-15 and resistance to fluoroquinolones have been reported worldwide. They are frequently a cause of infections, particularly of the urinary tract of humans. In human patients in Europe, approximately 1% of the 3rd generation cephalosporin-resistant E. coli produce CMY-2. However, recent studies in Asia showed higher rates and an increasing trend among the 3rd-generation cephalosporin-resistant E. coli isolates has been reported33.

Recently, ten multi-resistant strains of E. coli that harboured CMY-2 were observed with increasing tendency in the European livestock production. However, ST131 isolates with CMY-2 production have been reported rarely37,38.

CMY-2-producing E. coli isolates were also detected in products from meat, livestock animals and human patients. The predominant way of transmission of blaCMY-2 genes between animals and humans is the horizontal transfer of temporarily stable blaCMY-2-carrying IncK2 and IncI1 plasmids33. This suggests a zoonotic potential of the blaCMY-2 genes and their transmission by horizontal transfer and clonal spread along the food production chain33,37.

Extraintestinal virulence genes encoding adhesins, iron capture systems, toxins, and protectins have been correlated with successful colonization of gut in humans and animals39,40.

Our study of E. coli strains from wastewater showed that virulence genes cvaC, iutA, iss, papC were the most frequently detected in them. In some E. coli samples, we detected genes kps, tsh, papC, ibeA.

Bok et al.44 observed that virulence genes (fimH, papAH, iutA, iroN, ompT, traT, and iss) were more frequently identified in isolates from piglets than from sows. E. coli from piglets constituted a substantial reservoir of extraintestinal virulence genes and could increase the potential risk of extraintestinal infections. According this study44 the mobile genetic elements transmitted via horizontal gene transfer play an important role in the evolution of E. coli resistance. Most ExPEC virulence genes are clustered together on mobile genetic elements, usually on pathogenicity islands (PAI) or virulence plasmids, exhibiting a unique organization.

Certain Strains of Bacteria Associated with Diabetic Wounds That Do Not...

Model shows that the speed neurons fire impacts their ability to...