We tested this hypothesis with sera from ferrets immunised with a COVID-19 vaccine candidate that targets the S protein (D614 variant), and used biomolecular modelling to interpret our results. We used Australian isolates which either possess or lack the D614G mutation but are otherwise comparable in S protein sequence and also devoid of significant mutations of consequence within viral proteins responsible for cell binding and entry (as discerned with Geneious Prime 2020.1 software; c.f. Supplementary Table 1). Isolated at the Victorian Infectious Diseases Reference Laboratory7, the Australian isolates ‘VIC01’ and ‘SA01’ (which are D614) and ‘VIC31’ (which is G614), were used in standard virus neutralisation assays preformed at the Australian Centre for Disease Preparedness, as described under Methods.

Previous studies in rodents with INO-4800 have demonstrated the induction of humoural and cellular immune responses targeting SARS-CoV-2 spike protein8. In this study, ferrets were shown to have developed SARS-CoV-2 neutralising antibody responses following vaccination with INO-4800, demonstrating that ferrets are an appropriate animal to model COVID-19 vaccine immunogenicity, and that this DNA vaccine stimulates an effective B cell response. The overall median log2 neutralisation titre against the three virus isolates combined was 6.32 (range 4.32 to 8.32). Comparison of the titres by virus isolate (SA01, VIC01, and VIC31) revealed that the D614G mutation had little effect on neutralisation efficiency following vaccination (Fig. 1). Indeed, the overall log transformed mean neutralisation titres for the VIC31 variant (the G614 variant) were not significantly different than those for the SA01 and VIC01 isolates possessing the D614 (p > 0.05). 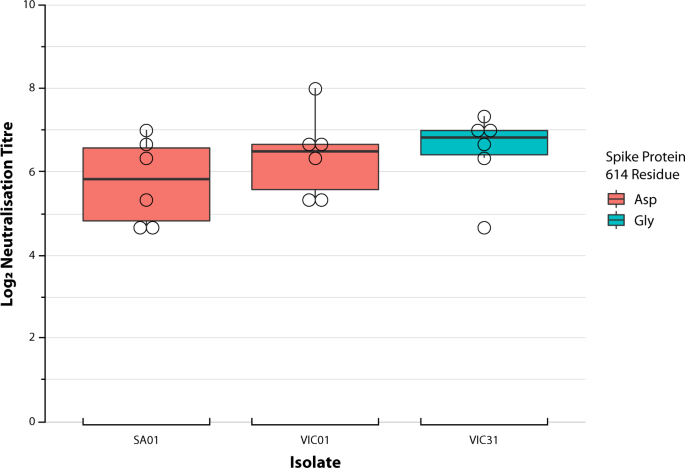 Y-axis represents log2 virus neutralising titre to the three Australian SARS-CoV-2 isolates following prime-boost vaccination with INO-4800, including three replicates of each ferret serum sample, represented as a circle for their mean. VIC01 and SA01 virus isolates, possessing a D614, are marked in red; whilst VIC31, possessing a G614, is marked in blue. The dark line on the chart for each virus isolate represents median titre, with the box indicating interquartile range and the vertical line representing the 95% confidence interval. Neutralisation titres against the different virus isolates are not significantly different.

We used molecular models of the spike protein (both our molecular dynamics simulations and another spike model9) to examine the structural context of the D614G mutation to address possible concerns of adverse vaccine efficacy and the plausibility of recently-proposed selection advantages2,3,4,5. The S protein of coronavirus comprises of two sections, S1 and S2, and forms a heavily glycosylated transmembrane trimer facilitating both host attachment (via the receptor binding domain ‘RBD’ in S1), and cell fusion/entry (via a trimeric membrane fusion S2 stalk) after proteolytic cleavage of the S1/S2 junction10 (Fig. 2a). The SARS-CoV-2 S protein is different to related coronaviruses as it contains a proprotein convertase (PPC) motif at the S1/S2 boundary, which has been shown to be pre-cleaved in pseudovirus cellular entry assays by the proprotein convertase furin10,11. 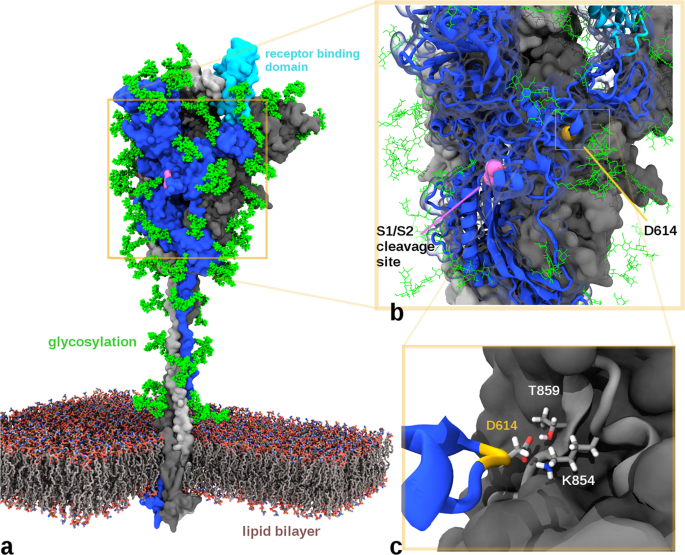 a Model of the glycosylated Spike protein trimer (based on Woo et al.9) depicting its insertion through a lipid bilayer and the relative position of a receptor binding domain in an ‘up’ position of the blue/cyan chain (other S chains coloured light and dark grey). b Close-up depicting the positioning of the solvent-accessible S1/S2 cleavage site (residues R685-S686) as well as the recessed and glycan-protected position of the D614 residue. c Cut-away view of the D614 interface with the adjacent S chain in grey. D614 can hydrogen bond with T859 and form a salt bridge with K854. A D614G mutation is expected to disrupt both these interactions.

The 614 position in S is upstream of the S1/S2 furin cleavage site (R685/S686)9 and is recessed at a buried interface position of the adjacent monomer while additionally shielded by an N-linked glycan at position N61612 (Fig. 2b). Given its internal position, the G614 variant is unlikely to be a component of neutralising epitopes on the S protein and thus a lack of adverse effects on neutralisation efficiency of antibodies generated following vaccination with D614-derived vaccines is not unexpected. Indeed, the location of residue 614 in S is distinct from both of the linear neutralising epitopes13.

Whilst we agree with studies suggesting that the D614G mutation introduces an elastase cleavage site14, our molecular dynamics simulations do not support their inference of increased replication efficiency by promoting elastase-mediated S1/S2 cleavage. Modelling of S in the presence of both furin and elastase proteases suggest that, while furin can access the S1/S2 cleavage site (Fig. S1), elastase is unable to access the putative G614-introduced elastase cleavage site due to its interface positioning and glycan blocking (Fig. S2a) unless the S1 trimer cap and S2 separate (Fig. S2b).

Recent findings2 suggested the superior infectivity of G614 is through the D614G mutation stabilising the interaction between the S1 and S2 domains. However, our examination of D614 (located in S1) reveals interactions with S2, not only through hydrogen bond interactions with an adjacent Thr859 as previously noted4, but also a salt bridge with residue Lys854 (Fig. 2c). The aspartate-to-glycine change at 614 removes the inter-chain D614-K854 and might actually destabilise the interaction between S1 and S2 domains.

Our in silico approach has shed additional insights into a couple of mechanisms that warrant further investigation, including experiments. Firstly, although our simulation considered interactions between human ACE2 and the RBD in the traditional ‘up’ orientation, over the course of a short 100-ns simulation we observed the ACE2 tilt and contact the adjacent RBD via V445 making close contact with P321 and F555 on ACE2. This suggests that the adjacent RBD in the ‘down’ conformation could contribute to ACE2 binding and specificity (Fig. S3), a hypothesis supported by previous work15 highlighting structural flexibility with three distinct conformations of SARS-CoV S protein in complex with ACE2.

Secondly, a parallel C-to-U substitution at position 14,408 in the genome, resulting in a P323L (P314L in orf1b) mutation in the RNA-dependent polymerase (RdRp/nsp12), has been associated with D614G16 (including in VIC31) and should therefore be considered for potential contribution to infectivity. The P323 position is in a hydrophobic cleft approximately 30 Å from the catalytic site of RdRp, but close to the nsp8 interface (Fig. S4). It is not immediately clear what effect the P323L mutation has on virulence. The Pro323 to Leu mutation may relieve some backbone constraints and contribute local conformational stability. We noted in our model based on pdb structure 6YYT17 that the cleft in nsp12 is predominately lined with arginine residues (R173, R249, R349 & R457) which may contribute to nucleotide binding due to the strong association with arginine and phosphate groups18 (Fig. S4). The P323L mutation appears to partially obstruct R349 in the cleft. We are yet to establish the significance of this mutation.

Given the rapidity with which this virus has emerged, correlates of protection have yet to be established for immune responses. Ideally, passive-protection assays would also be performed in future studies to determine in vivo effects. The experimental and biomolecular modelling approaches described above are available at many organisations around the world such as ours. Therefore, it would be desirable to analyse the impact of identified mutations, in collaboration with such organisations, before speculating on potential adverse effects on vaccines. As infectious clones are established19,20,21, it will be easier to study accumulated mutations, which are inevitable for this RNA virus, even with an exoribonuclease ‘proof-reading’ capacity. Therefore, we urge caution when these mutations are described in preprint articles2,3,4,5 because premature inferences on their effects without supporting experimental evidence could result in a media frenzy and potentially undermine public confidence in vaccines.

TREML4 mRNA Expression and Polymorphisms in Blood Leukocytes are Associated with...

Overcoming the Limitations of CRISPR Gene Editing with RNA Editing