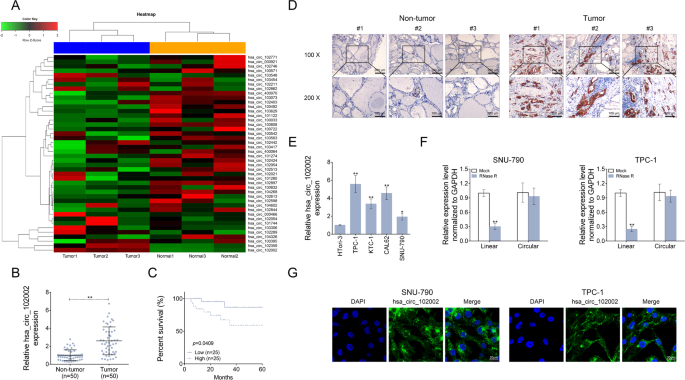 Paired papillary thyroid cancer (PTC) tissues (tumor) and normal adjacent tissues (normal) samples were collected at Shengjing Hospital of China Medical University. No chemotherapy or radiotherapy was performed for these PTC patients before section. The experiments were under the permission of the Ethics Committee of Shengjing Hospital of China Medical University (Approval No. 2019PS100J). Written informed consents were obtained from patients. Three pathologists performed diagnostics independently. Patient clinical information was listed in Table 1.

Total RNAs were extracted from PTC cells and tissues using TRIzol reagent (Thermo Fisher Scientific, Rockford, IL, USA). The RNA quality was evaluated by electrophoresis in agarose and observed by Agilent 2100 Bioanalyzer (Agilent Technologies, Chandler, USA). Microarray of circRNAs was performed in BGI.Tech (Beijing, China) and analyzed according to the Arraystar. Nucleus and cytoplasm were separated using an extraction Kit (Inventbiotech, Beijing, China). Complementary DNA was synthesized from total RNA by using PrimeScript RT Reagent Kit (Takara, Shiga, Japan). qRT-PCR assays for genes were conducted by SYBR Premix Ex Taq (Takara). SYBR PrimeScript miRNA RT-PCR Kit (Takara) was applied to quantity miRNA expressions. GAPDH (glyceraldehyde-3-phosphate dehydrogenase) is an enzyme in the classic glycolysis reaction, accounting for 10–20% of total proteins. The GAPDH gene has a highly conserved sequence and its expression in the same cell or tissue is generally constant. To normalize circ_102002 and HAS2 mRNA levels, GAPDH was selected as endogenous control. U6 snRNA was used to normalize miRNA expressions. After the Ct values of GAPDH or U6 in each sample were obtained by qRT-PCR, the stability of the reference genes was analyzed by internal reference screening software (geNorm, NormFinder and Bestkeeper). The amount of RNA to relative to the reference gene was calculated using the equation 2–ΔΔCT. The corresponding primer sequences were listed in Table S1.

An ISH kit (Thermo Fisher Scientific) was used to perform fluorescence detection of circ_102002 according to the manufacturer’s instructions. Tissues were first fixed in paraformaldehyde and then embedded using paraffin. After that, sections (5 μm) were cut. For tissue ISH, circ_102002 probe was labeled with peroxidase (Thermo Fisher Scientific). For cell ISH, cells were fixed in paraformaldehyde, blocked in pre-hybridization buffer, incubated with a circ_102002 probe conjugated by FITC (Exiqon, Vedbaek, Denmark) in hybridization buffer, and finally stained by DAPI (Sigma-Aldrich). Fluorescence images were photographed by a confocal microscope (Nikon, Tokyo, Japan). During the experiments of ISH, tissue sections hybridizated with mismatch control probe instead of circ_102002 probe were used as negative controls.

Immunofluorescence (IF) and immunohistochemistry (IHC) assays

Tissue sections were first cut. Since methylene bridge was generated in the process of formaldehyde fixation, the proteins were cross-linked to screen the antigen sites. The sections were immersed in citrate repair solution, and then heated in the microwave until boiling. The subboiling temperature (95–98 °C) was maintained for 10 min, and the antigens were reexposed by heat to restore the original conformation of the protein for immunohistochemical staining. For IF assay, antibodies against COX-2 and Ki67 were used to incubate with tissue sections overnight at 4 °C. Then, sections were incubated with secondary antibodies conjugated by Cy5.5 or FITC (Exiqon, Vedbaek, Denmark) in hybridization buffer, and finally stained by DAPI (Sigma-Aldrich). Fluorescence images were photographed by a confocal microscope (Nikon). For IHC assay, corresponding secondary antibodies and 3, 3ʹ-diaminobenzidine (DAB) solution (Sigma-Aldrich, St. Louis, MO, USA) were used to visualize the sections. Moreover, a microscope (TE2000-U, Nikon, Japan) was used to capture the IHC images. Tissue sections stained with isotype matched IgG instead of HAS2 primary antibody were used as negative controls.

Human normal thyroid cells (HTori-3) are immortalized by transfecting primary cultures of human thyroid epithelial cells with an origin-defective SV40 genome [23]. KTC-1 and CAL62 cells were purchased from Shanghai Institutes for Biological Sciences, Chinese Academy of Sciences (Shanghai, China). TPC-1 cells were obtained from Procell Life Science&Technology (Wuhan, China). SNU-790 cells were purchased from Korean Cell Line Bank (KCLB, Seoul, Korea). All cells were identified by short tandem repeat (STR) genotyping. For HTori-3 cells culture, F-12K Medium was used. Moreover, RPMI-1640 Medium was used for TPC-1, KTC-1, CAL62, and SNU-790 cells. All the culture media were supplemented with 10% FBS (Thermo Fisher Scientific), and all the cells were cultured in a humidified atmosphere with 5% CO2 at 37 °C. The cellular morphology of SNU-790 cells with circ_102002 upregulation or TPC-1 with circ_102002 downregulation was captured by a microscope (Nikon).

Lentivirus expressing circ_102002 (Lv-circ_102002), expressing shRNA for circ_102002 (sh- circ_102002) and their corresponding controls (Lv-NC or sh-NC) were purchased from GenePharma (Shanghai, China) and infected SNU-790 or TPC-1 cells. Puromycin (300 µg/ml, Sigma-Aldrich) was used for screening stable cells infected with these lentivirus, and single clones were harvested. In addition, cell transfection was performed with Lipofectamine 2000 (Invitrogen) according to the manufacturer’s instructions. SNU-790 or TPC-1 cells were transfected with miR-488-3p mimics (miR-488-3p), miR-625-5p mimics (miR-625-5p), miR-1197 mimics (miR-1197), miR-488-3p inhibitors (miR-488-3p inh), HAS2 expressing plasmid (HAS2) or the relevant controls (NC mimics, NC inh or Vector). The protocol for cell transfection in a 6-well plate is as follows: plate 5 × 104 cells per well in 2 ml of complete growth medium 12 h prior to transfection; wash with 1 × PBS and add 2 ml of fresh Opti-MEM medium; prepare transfection complexes by mixing 40 µl of serum-free medium, 6 µl of Lipofectamine 2000, and 1000 ng DNA or 100 nM miRNA mimics (or inhibitors); incubate transfection complexes at room temperature for 20 min; add prepared transfection complexes to 2 ml of Opti-MEM medium; incubate cells at 37 °C in a humidified CO2 incubator; assays for phenotype or target gene expression were performed 48–72 h after transfection. miRNA mimics and inhibitors were chemically synthesized (GenePharma). HAS2 expressing plasmid was constructed by enzyme digestion and ligation, and was confirmed by DNA sequencing (GenePharma).

Linear scratch wounds were conducted on the cell monolayer. After 24 h, an inverted microscope (Nikon) was subjected to take photos of cell migration. Then, the distances of the scrape were determined using an Image J software (http://rsb.info.nih.gov/ij/).

For cell migration assay, SNU-790 or TPC-1 cells (1 × 105) were cultured in the top chamber of an insert (Corning Costar Co., Cambridge, MA, USA). For cell invasion assay, the insert was pre-coated by Matrigel (working concentration: 2 mg/ml, BD Biosciences, San Jose, CA). In the top chamber, cell culture was performed using serum-free medium. Cell culture medium with FBS (10%) was applied to induce cells migrating to the lower chamber of the insert. Twelve hours later, the migrated and invaded cells were fixed. The matrigel and cells in the upper chamber were swabbed away by a cotton swab. Moreover, cells underside of the membrane were then stained with 0.1% crystal violet, and imaged by a microscope (Nikon). The number of cells in ten different fields was counted and compared with the control group.

RIP assay was performed as previously reported [24]. Ago2 antibodies or IgG were used to incubate the cell lysates of SNU-790 or TPC-1 cells. RNA was extracted from the pull down complexes, and relative levels of miR-488-3p, miR-625-5p, and miR-1197 were then determined using qRT-PCR.

The sequence of circ_102002 was amplified using a human genomic DNA and inserted into the p-MIR-reporter plasmid (Promega, Madison, WI, USA). The mutant luciferase plasmid (binding site: UGGCCUUUCA substituted by AUCGGAAAGU) was also used as a control. According to the methods above, the p-MIR-reporter plasmid containing the 3ʹ-UTR of HAS2 was obtained. In addition, the corresponding mutant luciferase plasmid (binding site: UCAAGGAAAAGUUCUUUCA substituted by UCAAGAAAAGUUGAAAGU) was constructed as a negative control. Primers sequences were listed in Table S3.

Animal experiments were operated according to the Guidelines for the Care and Use of Laboratory Animals published by the National Institutes of Health [26] and approved by the Ethics Committee of Shengjing Hospital of China Medical University. To establish a PTC lung metastasis model, thymic BALB/c nude mice (16–18 g) were used. Stable TPC-1 cells expressing a luciferase and shRNA for circ_102002 (sh-circ_102002) or the control cells (sh-NC) were used. Mice (5 mice/group) were intravenously injected with these cells (1 × 106). At 21 days post-implantation, the tumor-bearing mice were intraperitoneally injected with 100 μl of d-luciferin (10 mg/ml in PBS, Promega, Madison, WI, USA). After 10 min, the fluorescence images of the tumor and lung metastasis in the mice were imaged under anesthesia with 2.5% isofluorane using an IVIS Lumina XR III in vivo imaging system (PerkinElmer, Waltham, CA). Luminescence was expressed as photons/s per region of interest minus background luminescence for a similarly sized region. The lungs were dissected from mice and photographed. Additionally, haematoxylin and eosin (H&E) staining and IHC analysis of HAS2, p-FAK, p-Akt, E-cadherin, and N-cadherin in the tumor tissues were, respectively, conducted. All the antibody information was listed in Supplementary Table S2.

Experiments were performed in triplicate and repeated for at least three times independently. Samples and animals were randomly allocated to experimental groups and processed, and was blind with the investigator. Data were checked and they obeyed a normal distribution. Results were presented as the mean ± standard error of the mean (SEM). Student’s t-test was used to analyze the statistical differences between two groups, and one-way analysis of variance was used for multiple groups. The correlations between circ_102002 and miR-488-3p, circ_102002 and HAS2 mRNA, miR-488-3p and HAS2 mRNA were, respectively, determined by Pearson correlation analysis. p < 0.01 was classified as significant. */# p < 0.05; **/# # p < 0.01.

Beaver Feces Inspire a Way to Convert Type A to Type...

Is Hepatitis D Healthcare Being Overlooked?