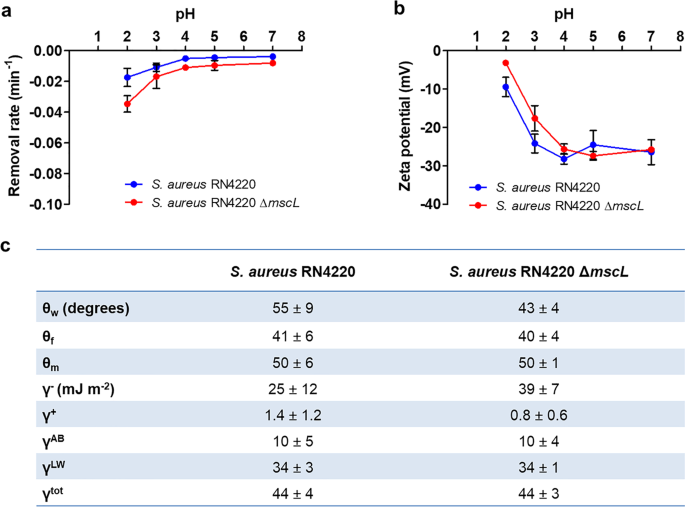 Surface roughnesses were measured with an atomic force microscope (AFM; BioScope Catalyst, Bruker, Camarillo, CA, USA), using ScanAsyst-air tips (tip curvature radius 2 nm; Bruker) to scan areas of 50 × 50 μm at a rate of 1 Hz. Contact angles were measured with water, formamide and methylene iodide, using the sessile drop technique and a home-made contour monitor. Contact angles with these liquids, having different surface tensions and polarities, allowed calculation of the total surface free energy (γtot), together with its acid-base (γAB) component, which in turn can be divided into electron-donating (γ−) and -accepting (γ+) parameters, and the Lifshitz–Van der Waals (γLW) component50. Surface roughness and contact angles were measured in triplicate on three different substratum surfaces.

The combined effects of surface hydrophobicity and charge on staphylococcal adhesion to a hydrophobic ligand were determined, as previously described52. Briefly, staphylococci were resuspended in 3 mL of 10 mM potassium phosphate buffer containing 1:20 (v/v) hexadecane at different pH values (pH 2, 3, 4, 5, 7) to an optical density at 600 nm between 0.4 and 0.6 (initial absorbance at time zero [A0]), as spectrophotometrically measured (Spectronic 20 Genesys, Spectronic Instruments, Rochester, NY, USA). The suspension was vortexed for 10 s and allowed to settle for 10 min, and the optical density was measured again (absorbance at time t [At]). This procedure was repeated for five more times to enable calculation of an initial rate of bacterial removal from the aqueous phase defined as

where t is the vortexing time. The experiment was performed in triplicate with different bacterial cultures.

AFM force measurements were done on a BioScope Catalyst AFM (Bruker), at room temperature in 10 mM potassium phosphate buffer. Force–distance curves were obtained under a loading force 3 nN at approach and retraction velocity 2 μm s−1, and taken prior to and after 10 s bond-maturation. To verify that measurements did not disrupt bacterial integrity, five force–distance curves at a loading force of 3 nN and 0 s contact time were acquired on clean glass at the onset and end of each experiment. When adhesion forces differed more than 1 nN from the onset to the end of an experiment, the probe and its last data set obtained were discarded and the probe was replaced by a new one. For each strain, AFM measurements were performed with at least three probes prepared from three separate bacterial cultures. With each probe, at least three different spots on each substratum surface were measured, recording five force–distance curves on each spot for each contact time.

For measuring the gating of mechanosensitive channels, bacterial uptake of the fluorescent dye calcein (Sigma-Aldrich) was monitored. First, bacteria were allowed to sediment from a suspension in PBS (108 mL−1) onto the different substratum surfaces for 90 min, after which PBS was removed and gentle rinsing with PBS was applied to remove non-adhering bacteria. Subsequently, calcein was added in a concentration of 4 mM for 15 min, followed by fixation with 4% formaldehyde (VWR International, Breda, Netherlands) for 15 min to prevent removal of intracellular calcein. Extensive rinsing in ultrapure water removed the excess extracellular calcein.

As a control, planktonic bacteria were used. Calcein (4 mM) was added to a staphylococcal suspension for 15 min, followed by fixation with 4% formaldehyde for 15 min. Excess extracellular calcein was removed by filtration with 0.45-μm pore-size HA membrane filters (Millipore Corporation). Bacteria were then collected from the filters by vortexing and resuspended in PBS.

Phase-contrast and fluorescent images were acquired with a fluorescence microscope (Leica, Wetzlar, Germany) on both adhering and planktonic bacteria, to evaluate total number of adhering bacteria or in suspension and the percentage of bacteria that displayed calcein uptake. The percentage of bacteria that displayed fluorescence in suspension or adhering to a surface was taken as a measure for calcein uptake, according to a protocol previously described for gating in mechanosensitive channels reconstituted in liposomes33 and validated here for use in bacteria (Table 3). For validation, channels were blocked by 15-min exposure to 4% formaldehyde34 or blocking was induced by 15-min exposure to 100 μM gadolinium55 before calcein exposure.

To allow more accurate fitting, the plateau level was mathematically confined to the maximum percentage of adhering, fluorescent staphylococci observed for each strain. Experiments were performed in triplicate with different bacterial cultures.

First, MIC and MBC of the staphylococci for dihydrostreptomycin were determined. To this end, bacterial cultures (105 mL−1 in TSB) were dispensed in a 96-well microtiter plate with dihydrostreptomycin sesquisulfate (Sigma-Aldrich) in TSB with known concentrations and applying a step factor dilution of 2 starting from 512 μg mL−1. Incubation was done at 37 °C for 24 h. After incubation, MIC was taken as the lowest antibiotic concentration not generating visible turbidity. Then, 10 μL of bacterial suspensions of each well showing no turbidity, were plated on TSB agar plates and incubated at 37 °C for 24 h. The MBC was taken as the lowest concentration at which no colonies were visible on the plate. Experiments were performed in triplicate with different bacterial cultures.

To evaluate the differential uptake of dihydrostreptomycin through mechanosensitive channels15 in adhering and planktonic staphylococci, bacterial suspensions (108 mL−1 in PBS) were allowed to sediment on different surfaces for 90 min or maintained planktonically in suspension. After subsequent exposure to dihydrostreptomycin (512 μg mL−1) in PBS for 120 min, bacteria were collected by 1 min sonication in a water bath and serially diluted in PBS. Exposure to PBS was applied as a control. Next, 10-μL aliquots were plated on TSB agar plates and incubated for 16 h at 37 °C. The number of colonies formed on the plates was manually counted. Experiments were performed in triplicate with different bacterial cultures.

GraphPad Prism, version 8.4.3 (San Diego, CA, USA) was employed for statistical analysis. Data were tested for normal distribution with Shapiro–Wilk normality test. If data were normally distributed, one-way analyses of variance (ANOVA) with Tukey’s HSD post hoc test or a two-tailed Student’s t-test were employed. When data were not normally distributed, Kruskal–Wallis test with Dunns’ approximation replaced ANOVA. Comparisons of dihydrostreptomycin killing across substratum surfaces between the parent strain and its mutant were made using one-way ANOVA test with Sidak’s multiple comparison adjustment (four comparisons). p < 0.05 was used as significance for all tests.

Zebrafish capture a ‘window’ on the cancer process

Targeting Aging is the Way to Treat Diseases of Aging