Human umbilical cords were obtained from the AN-AN Women and Children Clinic (Tainan, Taiwan) with patients’ consents and all the experimental protocols and the inform consent form were approved by the institutional review board/ethics committee of National Cheng Kung University Hospital (ER-99-060). Immediately after delivery, the cords were placed in cold Hank’s buffer saline solution and transferred to the laboratory for processing. Intact HUAs were isolated from the cords on ice using blunt dissection. Each HUA was cut in half; one half directly underwent decellularization or mechanical testing and the other half was subjected to the abluminal lining removal prior to further processing or testing. All methods were carried out in accordance with relevant guidelines and regulations.

Enzymatic digestion of the abluminal surface 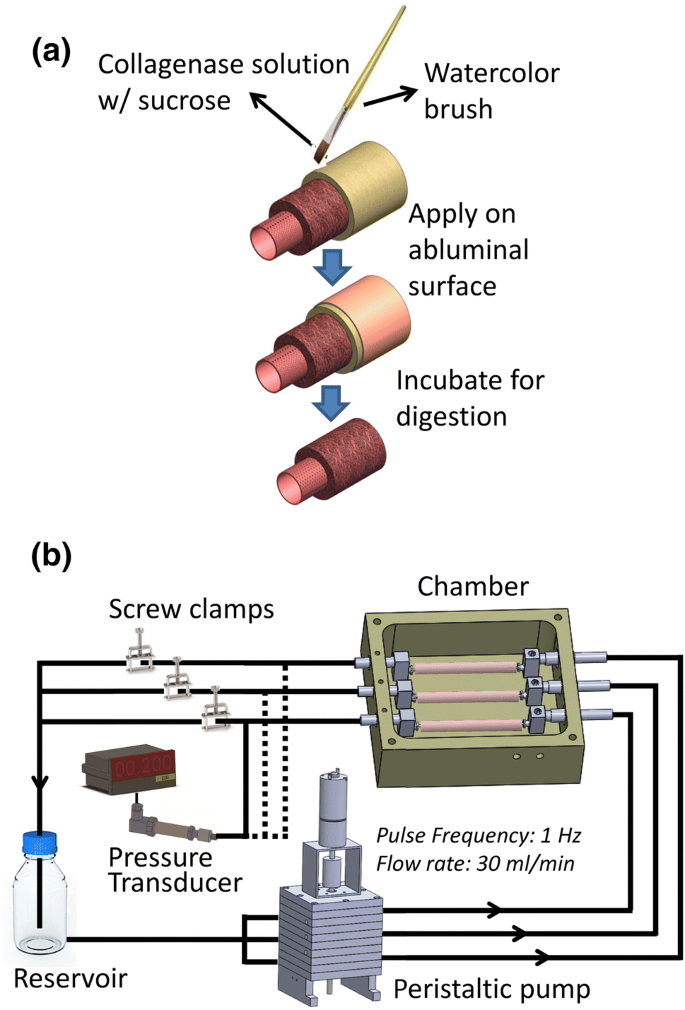 Schematics of the collagenase treatment procedures for removing the abluminal lining of HUAs (a) and of the perfusion system for decellularizing HUAs (b).

Permeability of the vessel wall

For permeability testing, HUAs were first cannulated with Luer adaptors at both ends. Upon expelling air in the lumen, one end of the HUA was plugged and the other end was connected to a bottle filled with deionized water. The HUA was then pressurized to 30 cmH2O by raising the water level in the bottle. Transmural flow was measured with transmural pressure fixed at 30 cmH2O. The permeability (\(k\)) of the HUA vessel wall was calculated using Darcy’s law, which describes the fluid flow through porous media as \(k = \frac{QL\mu }{{A_{s} \Delta P}}\), where \(A_{s}\) is the luminal surface area of the HUA (m2), \(\Delta P\) is the pressure drop across the vessel wall (mmHg), \(\mu\) is the viscosity of deionized water (Pa s), \(Q\) is the transmural flow (m3/s), and \(L\) is the wall thickness measured by a custom-made high frequency ultrasound (lateral/axial resolution = 180/42 μm).

Scanning electron microscopy (SEM) was employed to examine the surface topography of Col-HUAs and Unt-HUAs cross-section. The fractured cross-section of the HUA was prepared by breaking the vessel in liquid nitrogen. The HUA was rinsed with PBS buffer, fixed in 2.5% glutaraldehyde solution for 1 h, rinsed again with deionized water, and then dehydrated with graded alcohols. Dried specimens were sputter-coated with platinum (Sputter E-1045, Hitachi, Japan) and viewed using a scanning electron microscope (S-4100, Hitachi, Japan).

Transmission electron microscopy (TEM) was employed to reveal the ultrastructure of Col-HUAs and Uni-HUAs cross-section near the abluminal surface. The HUA was rinsed with PBS buffer, fixed in 2.5% glutaraldehyde solution overnight at 4 °C, rinsed again with deionized water, and then dehydrated with graded alcohols. The dried specimens were prepared into ultra-thin sections and stained with uranyl acetate. Images were acquired by a transmission electron microscope (JEM-1400, JEOL Ltd., Japan).

SDS was selected as the decellularization agent to evaluate the effect of the abluminal lining removal on the decellularization of HUAs22. SDS (Mallinckrodt Baker, Phillipsburg, NJ) was dissolved in deionized water to prepare 1% (w/v) SDS solution. Both Col-HUAs and Unt-HUAs were decellularized with 1% SDS solution under three decellularization conditions (i.e., rotary agitation, simple perfusion, and pressurized perfusion) for 12, 24, or 48 h. For the simple agitation group, the HUA (~ 6 cm) was immersed in the SDS solution on an orbital shaker at 100 rpm at room temperature22. For the simple perfusion and pressurized perfusion groups, the HUA (~ 6 cm) was cannulated with luer adapters using 5-O suture and coupled to a custom-built perfusion system, which consists of a peristatic pump, a chamber accommodating the vessels to be decellularized, a solution reservoir, a pressure transducer (Model 80A-005G, 0–5 psi, Sensormate, Taiwan) and screw clamps (Fig. 1). During decellularization, 1 L of the SDS solution was continuously circulated at an average flow rate of 30 mL/min and a pulse frequency of 1 Hz at room temperature. The transmural pressure was set at 30 ± 10 mmHg (± 10 was caused by pulse flow) by adjusting the screw clamp in the flow loop for the pressurized perfusion group whereas the screw clamp was not engaged for the simple perfusion group. The pressure was selected based on our pilot study in which significant condensation of the ECM was observed in the Col-HUAs perfused at a transmural pressure greater than 30 mmHg. After the specified period of time, specimens of 2 mm length were cut at least 1 cm away from the sutured ends, washed in deionized water with agitation at least five times until no bubbles were found in the water to remove residual SDS, and then processed for either histology or DNA quantification.

The specimens were fixed in 10% neutral-buffered formalin overnight at room temperature. After standard processing, the HUA was embedded in paraffin to enable examination of cross sections. Five micron sections were cut using a microtome (Leitz 1512, Leica, Germany) and collected on positively charged slides. The sections were stained with H&E, Alcian blue, and picro-sirius red (PSR) for illustration of nuclei, glycosaminoglycans (GAGs), and collagen, respectively. Histological images were acquired by an optical microscope (DM2500P, Leica, Germany) equipped with a CCD camera (DFC295 digital camera, Leica, Germany). Specifically, the PSR-stained sections were imaged under polarized light. Ten 24-bit color images of 2048 × 1563 pixel resolution were acquired under polarized light and normal light, respectively, for each specimen with a 40 × objective and saved in TIFF for semi-quantification of collagen and GAG. Relative collagen content was analyzed by a LabVIEW routine previously developed for quantifying collagen in PSR-stained sections23. Relative GAG content was analyzed similarly by another LabVIEW routine.

Quant-iT PicoGreen dsDNA assay kit (Invitrogen, USA) was used to quantify residual DNA in the specimen. Similar to the previously published protocol22, the specimen was lyophilized at − 40 °C for 24 h and its dry weight was measured. The dried specimen was then incubated in a papain solution, which contained 20 U/mL papain (Worthinton, Lakewood, NJ), 1.1 mM EDTA (Panreac, Spain), 5.5 mM cysteine-HCl (Panreac, Spain) and 0.067 mM 2-mercaptoethanol (Alfa Aesar, England) overnight at 60 °C until the HUA was completely digested. The solution was diluted with 0.2 M Tris–EDTA buffer and then incubated with the working solution of the kit in a 96-well plate. The fluorescence of the sample was measured using a fluorometer (excitation: 485 nm, emission: 538 nm; Fluoroskan Ascent, Thermo Fisher Scientific, Waltham, MA) and compared with that of a λ dsDNA standard (0–10 ng/mL) to determine the weight of residual DNA in the HUA. Finally, the weight of the residual DNA was normalized by the dry weight of the specimen.

The mechanical properties of Unt-HUAs, Col-HUAs, and decellularized Col-HUAs were evaluated by pressure-diameter tests using a custom-built mechanical tester24. Five HUAs were used; one from each of five donors. Every HUA was cut into three ~ 25-mm segments for preparing the three kinds of HUAs. First, the vessel was cannulated with Luer adaptors and then coupled to the loading frame of the tester. Specifically, every vessel was cannulated with a mechanically negligible, size-matched PDMS tube inserted in its lumen as water leakage from Col-HUAs and decellularized Col-HUAs during the test was expected24. The vessel was preconditioned by cyclic pressurization between 0 and 150 mmHg ten times. After preconditioning, the vessel was decoupled from the loading frame and recoupled at its updated unloaded configuration (the luminal pressure was about 10 mmHg, and the axial load was about 0 mN). The outer diameter of the vessel was recorded at the unloaded configuration. The axially constrained vessel was then subjected to cyclic pressurization at the unloaded length. Data from the loading phase of the cycle were analyzed for the mechanical properties of the vessel as follows.

The compliance of the vessel was calculated by the Eq. (1).

where \(P_{i}\) and \(D_{i}\) (\(i\) = 1 or 2) respectively represent the transmural pressure and the corresponding outer diameter of the vessel. In this study, the compliance was calculated between 70 and 120 mmHg. That is, \(P_{1}\) = 120 mmHg and \(P_{2}\) = 70 mmHg. As the compliance can be influenced by the vessel wall thickness, it is more informative to examine the mechanical properties of the HUAs in terms of stress-stretch relationship.

Although not measurable, the deformed inner radius, \(a\), at any deformed state can be computed by the Eq. (3) given the on-line measurement of deformed outer radius, \(b\), with the assumption of incompressibility.

The associated mean circumferential stretch ratio, \(\lambda_{\theta }\), was determined by the Eq. (5),

The burst pressure and suture retention strength of the three groups of HUAs were also examined using the same mechanical tester with a 100 psi pressure transducer (Model 80A, 0–100 psi, Sensormate, Taiwan) and a 50 N load cell (MOB-10, Transducer Technique, Temecula, CA) as larger maximum pressure and maximum force were expected. The burst pressure of the HUA, the maximum pressure that the vessel could bear before failure, was measured by gradually increasing the transmural pressure of a preconditioned vessel. Suture retention tests were performed on ~ 20-mm HUA segments with a single 6-0 polypropylene suture placed at 2 mm away from one end of the vessel. The suture was connected to the load cell and the other end of the vessel was fixed to the loading frame. As the vessel was stretched at an extension rate of 0.25 mm/s, the force was recorded until the suture pulled through the vessel.

Data were presented as mean ± standard deviation (SD). The mechanical properties of Unt-HUAs, Col-HUAs, and decellularized Col-HUAs were compared by one-way ANOVA with repeated measures in conjunction with Tukey post-hoc procedure. The collagen and GAG contents of the three HUAs groups as well as the residual DNA in either the Unt-HUAs or the Col-HUAs decellularized under the three decellularization conditions were compared by one-way ANOVA with Tukey post-hoc. The significance level was set at p = 0.05.

New Analysis Finds Vast Majority of Dietary Supplements to have no...