Sea squirts such as Ciona intestinalis are the closest living invertebrate relatives of vertebrates. Their tadpole-like larvae feature some of the same organs and tissues as those found in developing vertebrates. Writing in Nature, Cao et al.1 use gene-expression data to examine the embryonic development of C. intestinalis larvae and to compare its development with that of other chordate animals, including vertebrates and cephalochordates, to reveal fresh insights into the evolution of vertebrates. 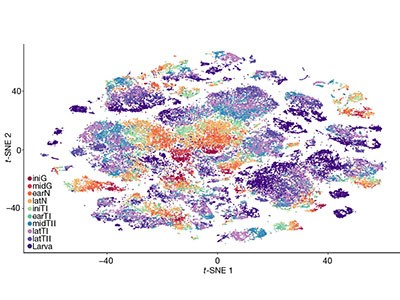 Single-cell analyses of gene expression have revolutionized various biological subdisciplines2. Such analyses at different stages of embryonic development have revealed how cells give rise to the various cell types that perform distinct functions and make up specific parts of the embryo3,4. As examples, studies of frog and zebrafish embryos have demonstrated that the three layers of cells that form these embryos — the ectoderm, endoderm and mesoderm — contain at least 50 cell types that have similar gene-expression profiles3,4. Studies into how different species develop often unveil clues to their evolutionary origins.

There are several advantages to studying embryonic development in sea squirts — which are also known as ascidians. As the closest relatives of vertebrates, they provide a reference for understanding the evolution of vertebrate body plans (Fig. 1). In C. intestinalis, embryogenesis — that is, the period of development that begins when cells are initially reorganized into a multilayered body of cells called a gastrula, and ends with larval hatching — takes just a day to complete. A Ciona larva comprises only about 2,500 cells, which make up distinctly differentiated organs and systems, including bilateral muscle, the central nervous system (CNS) and the notochord — a rod-like structure that gives rise to the backbone in vertebrates, and which is a defining characteristic of all chordate animals. Figure 1 | Evolution of the chordate body plan. a, Vertebrates evolved from a common ancestor shared with urochordates, such as ascidians (including the sea squirt Ciona intestinalis), and the cephalochordate amphioxus. b, Whereas the amphioxus has no structures comparable to the vertebrate brain, cells in the sensory vesicle of the developing C. intestinalis nervous system express sets of regulatory genes that are also expressed in the neural crest and placode (structures of the developing vertebrate nervous system), suggesting that the simple brain of ascidian larvae contains prototypes of these regions. Cao et al.1 measured gene expression in single cells of developing C. intestinalis embryos, and describe a cell-lineage map that reveals a prototype of the telencephalon (a part of the vertebrate brain that, in more complex vertebrates, is required for cognition) at the front of the larval ascidian brain. The neural plate gives rise to the brain and the spinal cord (in vertebrates) or the nerve cord (in urochordates). The position of the eventual mouth is also shown. In both panels, anterior is left, and posterior is right. (Embryo images adapted from ref. 15; CC BY 4.0.)

The cell lineages that comprise ascidian embryos have long been described5; the developmental fate of cells is restricted early in embryogenesis, at around the 110-cell stage. The C. intestinalis genome has been sequenced6, and a network of genes and regulatory molecules that provides the blueprint for the body plan of all chordate animals has been characterized in C. intestinalis7.

Cao et al. profiled the gene expression of more than 90,000 single cells from C. intestinalis at 10 developmental stages, from gastrulae to swimming larvae. The authors used these gene-expression data — carefully considering the expression of molecular markers of different cell types and lineages — to construct developmental trajectories of individual cell types. Whereas the larvae of C. intestinalis were previously thought to have approximately 20 cell types8, Cao and colleagues’ analysis identified 60 distinct cell types. A similarly comprehensive profiling of larval and embryonic cell types in vertebrates and cephalochordates would not currently be feasible.

Vertebrates and their sister group, the urochordates — which include the ascidians — are thought to share a common ancestor with cephalochordate animals, such as amphioxus (Fig. 1a). Cao and colleagues’ study provides at least two insights into the evolution of vertebrates from this common ancestor: one concerning the notochord, and the other concerning the CNS, which becomes especially complex in vertebrates.

Amphioxus larvae are fish-like, and their notochord consists of stiff, coin-shaped muscle cells. By contrast, the notochords of ascidian larvae and vertebrates lack muscle-like properties, and instead consist of cells containing fluid-filled vacuoles that provide stiffness for muscle-driven movements of the tail. How these distinct notochord types evolved has been unclear. Cao et al. provide gene-expression evidence that the C. intestinalis notochord exhibits properties of both types. Specifically, the anterior part of the notochord is typical of that of ascidians and vertebrates, whereas the posterior part consists of cells that have muscular properties, as in amphioxus larvae. However, how C. intestinalis produces the anterior and posterior parts independently and combines them into a single organ is not clear9.

According to the ‘new head’ hypothesis10, the evolution of vertebrates can be largely ascribed to the emergence of placodes and the neural crest, which are developmental populations of cells that give rise to most of the tissues in the head and jaw. Previous evolutionary–developmental studies have shown that C. intestinalis possesses rudimentary versions of these two key vertebrate innovations11,12. In contrast to the CNS of amphioxus larvae, which is not very well organized, the CNS of ascidian larvae resembles a prototype of the vertebrate brain (Fig. 1b). Cao and colleagues identified 41 neural cell types in C. intestinalis larvae, including peripheral sensory cells and interneuronal cells, and showed that each type mapped to a specific region of the CNS, including the sensory vesicle (the anterior part of the CNS in urochordates), the motor ganglion (a cluster of neurons that control movement) and the nerve cord (the bundle of neuronal fibres that runs along the length of the body of chordate animals).

Cao and co-workers’ data also help to elucidate the evolutionary origins of the telencephalon of the vertebrate brain; in many higher vertebrates, the telencephalon is enlarged and is crucial for perception and cognition. The gene-expression profiles and developmental trajectories of cells in the anterior-most regions of the neural plate (a developmental structure that gives rise to the CNS) revealed that these regions, particularly the sensory cells of the palps (protrusions of ectoderm tissue at the front of the larva) and the pro-anterior sensory vesicle (located at the anterior of the developing nervous system) are the invertebrate counterparts of the vertebrate telencephalon. The vertebrate telencephalon is thus likely to have arisen through the incorporation of non-neural ectoderm into anterior regions of the developing nervous system.

Over the past two decades, there have been great advances in our understanding of the molecular, cellular and developmental mechanisms involved in the origins of chordates13 and the evolution of vertebrates14. As shown by Cao et al.1, single-cell analyses of gene expression deepen our understanding of the evolutionary emergence of cell types that confer vertebrate-specific properties. This line of research also highlights the importance of genomic information and the wide-ranging scope of analyses of gene regulatory networks. Mechanisms of vertebrate evolution revealed by evolutionary–developmental studies will increasingly be based on detailed and precise data from gene regulatory networks in individual cells, tissues and organs, and data acquired using other new techniques, such as those that probe the architecture of DNA complexes in the nuclei of individual cells, and sophisticated computational tools.

More than half of patients in pain management study took no...