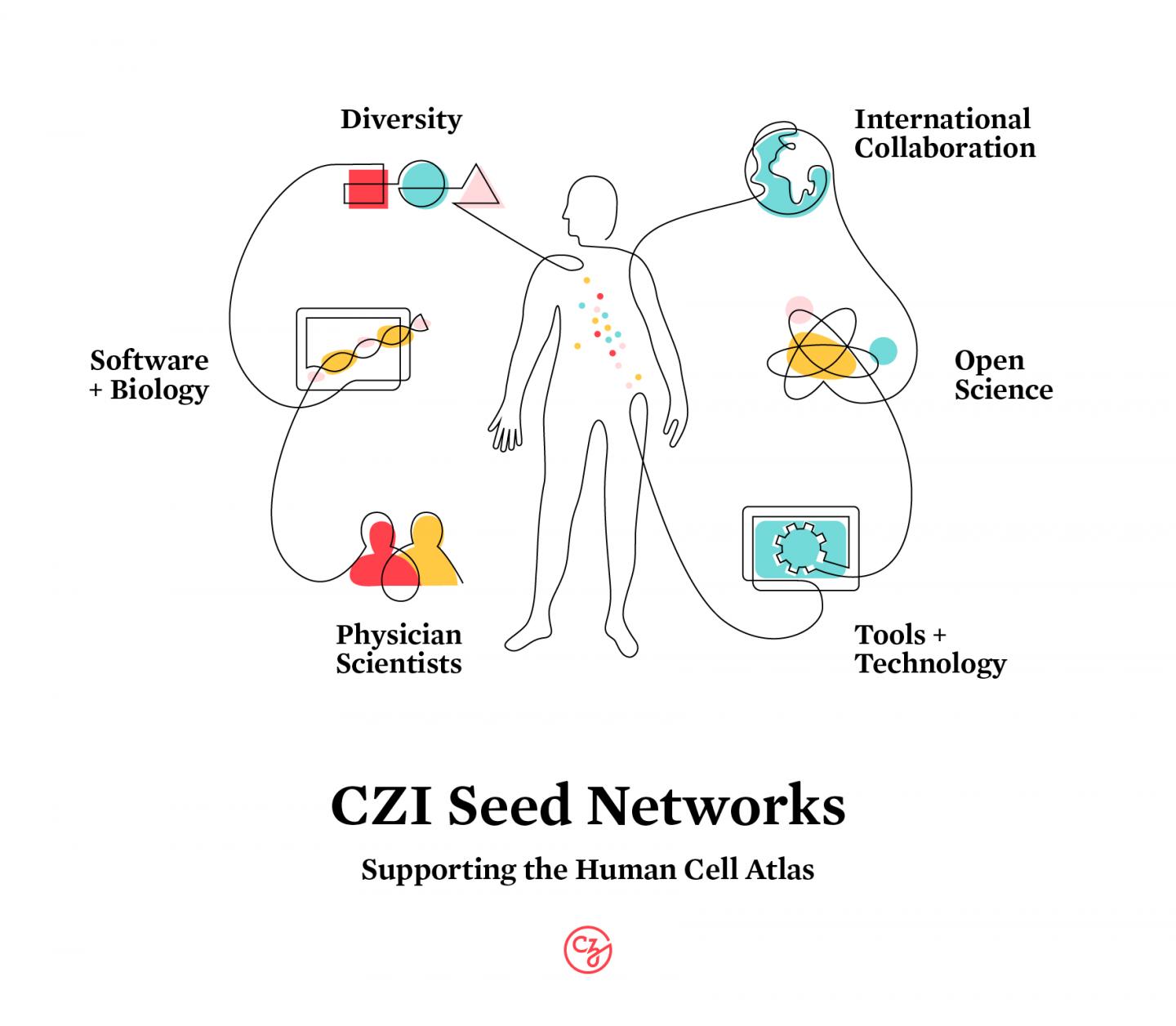 Participants in the three-year Seed Networks projects will focus on mapping specific tissues, such as the heart, eye, or liver, in the healthy human body. The resulting cellular and molecular maps will be a resource for understanding what goes wrong when disease strikes. The Seed Networks grantees represent 20 countries and more than 200 labs, with 45 percent of projects featuring international collaborations. The networks will support coordination between scientists, physicians, and engineers, solidify collaborations, and help generate valuable data and tools for the first draft of the Atlas.

“The global Human Cell Atlas effort is a beacon for what can be accomplished when experts across scientific fields and time zones work together towards a common goal,” said CZI Head of Science Cori Bargmann. “With CZI’s Seed Networks grants, we’re excited to further support and build interdisciplinary collaborations that will accelerate progress towards a first draft of the Human Cell Atlas.”

Each of the collaborative Seed Networks groups consists of at least three principal investigators, including at least one computational biologist or software engineer, together with additional computational biologists, engineers, experimental biologists, and/or physicians. 60 percent of groups include a physician to help ensure that insights from basic biology research are informed by medical practice and are poised to accelerate impact. View the full list of the CZI Seed Networks award recipients.

The Human Cell Atlas is a scientist-led initiative that has emerged as a collaborative federation of diverse experts in biology, computation, and medicine. The Seed Networks projects seek to provide additional support to ongoing collaborative networks and invite new participants to this effort. Investigators in the Seed Networks will have the opportunity to learn and collaborate with the community, as well as with CZI computational biologists and software engineers.

The Seed Networks projects will generate new tools, open source analysis methods, and significant contributions of diverse data types to the Human Cell Atlas Data Coordination Platform, a unified resource that will enable data sharing across researchers and research institutes. All of the data, protocols, and computational tools developed as a part of Seed Networks will be freely available to the research community. CZI is working with the European Bioinformatics Institute, the Broad Institute of Harvard and MIT, and the University of California, Santa Cruz to formulate, fund, and jointly build this Data Coordination Platform.

CZI’s early support of pilot projects for the HCA has helped the community develop shared goals, standards, assays, protocols, and computational resources while exploring a landscape of potential HCA projects. The Seed Networks request for applications is CZI’s third in support of the HCA over the past two years. Previously, CZI announced support for 85 projects to create collaborative computational tools in support of building the HCA, as well as 38 pilot projects to help establish best practices and technologies.

About the Chan Zuckerberg Initiative

Founded by Dr. Priscilla Chan and Mark Zuckerberg in 2015, the Chan Zuckerberg Initiative (CZI) is a new kind of philanthropy that’s leveraging technology to help solve some of the world’s toughest challenges — from eradicating disease, to improving education, to reforming the criminal justice system. Across three core Initiative focus areas of Science, Education, and Justice & Opportunity, we’re pairing engineering with grant-making, impact investing, and policy and advocacy work to help build an inclusive, just and healthy future for everyone. For more information, please visit http://www.chanzuckerberg.com.