P. caudatum were cultivated in a modified Chalkley’s medium enriched with 10 g of dried alfalfa and 40 grains of wheat per litre at room temperature in non-sterile conditions. Cultures were exposed to a day and night cycle but were kept out of direct sunlight. Organisms were harvested in log growth phase by centrifugation at 400 × G prior to being rinsed and resuspended in fresh media.

In light of the lack of standardisation of nanotoxicological experiments, the experimental environment (Fig. 1) used was designed on the basis of being a simple, modular platform for making reproducible measurements between a range of organisms and across a range of laboratories. It consisted of two polyethylene fluorimeter cuvettes (named ‘A’ and ‘B’) measuring 12 × 12 × 44 mm, affixed to the base of a glass microscope slide (75 × 25 × 1.0 mm) with epoxy resin (Araldite, Huntsman, USA). The cuvettes were linked at a point 15 mm above their base by flexible polytetrafluoroethylene (PTFE) tubing, OD 3.0 mm ID 1.0 mm length 5 mm, which were affixed to the cuvettes with epoxy. The connecting tube’s length was sufficient to make the rate of diffusion between the chambers low to negate the possibility of significant quantities of nanoparticles from diffusing between them in the time allotted for each experiment (see Supplementary S1). Prior to each experiment, both chambers were filled with 2.0 ml of sterile culture medium. Care was taken to ensure that fluid levels were equal in both cuvettes and that the linking tube did not become air-locked. Whenever quantities of fluid containing cells or particles were added to a chamber, an equal quantity of fluid was added to the other chamber simultaneously in order to prevent fluid transfer resulting from pressure changes.

A range of initial control experiments demonstrating the suitability of the experimental environments used — showing that P. caudatum cells do not transfer between chambers for at least 24 hours post inoculation if no stimuli were applied and that no particulate transfer was observed over 24 hours in the absence of cells — are included in Supplementary S1.

The following two varieties of particulate were chosen for use in all experiments as our previous work has demonstrated that P. caudatum will favourably ingest both whilst suffering minimal deleterious health effects in the short term (for a characterisation of these nanomaterials and their interactions, please see refs 8,9).

All observations were made with a Zeiss Axiovert 200 M inverted microscope and data were captured with an Olympus SC50 camera via CellSens software. FLPs were observed through excitation with a 488 nm LED lamp (CoolLed, UK) and MNPs were observed with phase contrast optics. Although the particle size of the MNPs was beyond the resolution of the light microscope, fluid discolouration was quantified through software and a magnet was sometimes employed to draw aggregated MNPs into the field of view; MNPs within P. caudatum cells were aggregated within endocytotic vesicles in quantities visible under ×400 magnification.

All cells were observed by transferring them to a cavity slide containing 100 μl of fixative, 2% paraformaldehyde in pH 7.2 phosphate buffered saline.

Two methods for controlling migration of P. caudatum cells, one attractant and one repellent, were employed. Attraction was mediated chemically: this decision was made in order to enhance uptake via the organisms’ feeding system and to disrupt normal cellular processes as little as possible. Chemoattractive potential of the two varieties of particulate, both in isolation and in conjunction, were evaluated verses a known chemoattractant, heat-fixed yeast (Saccharomyces cerevisiae) suspensions (see Supplementary S1 for culture details).

Approximately 25 P. caudatum cells in 200 μl of medium were placed in chamber A whilst B was simultaneously filled with the same quantity of attractant/particle solution (dechlorinated tap water for controls) and the experimental environment was placed onto a stereomicroscope stage, focused on B. The chambers were checked every 2–4 hours until a cell was identified, at which the time elapsed since the start of the experiment was recorded as the ‘minimum migration time’.

Repulsion was mediated electrically via two 25 × 1° mm platinum wire electrodes, inserted one per chamber into the experimental environment, based on the well-characterised principle of P. caudatum galvanotaxis (migration towards the cathode in a DC electrical field). Electrical control of migration was chosen for its rapidity and ability for being dynamically altered.

Similarly to the aforementioned chemotaxis experiments, 25 cells in 200 μl of medium were transferred to chamber A whilst B was simultaneously filled with an equal quantity of fresh media. The electrodes were connected to a bench-top power supply in a configuration such that the cathode was located in chamber B. Initial experimentation demonstrated that 18 V at 0.3 A was sufficient to induce rapid responses from the cells without causing lysis through the duration of the experiment. The experimental environment was placed on the stage of a stereomicroscope focused on chamber A. The power supply was switched on for 300 seconds, after which the number of cells remaining in A was recorded.

Cells were added to chamber A at a concentration of approx. 200 per ml (i.e. approx. 400 total) whilst the same quantity of FLP solution was simultaneously added to B. The experimental environment was then placed in an opaque box for 6 hours, after which cells were removed from B for observation. Counts of FLP intake per cell were made manually. No attempts were made to quantify MNP uptake in this study.

A low-cost fluorescence spectrometer was developed towards creating a simple method for detecting the completion of a nanoparticle clearance operation in organisms exposed to a mixture of a nanoparticle of interest and FLPs. The device was designed to articulate onto a single fluorimeter cuvette and was produced as follows (see Supplementary S2 for parts list).

The light source was a single surface-mount 485 nm light emitting diode (LED) that produced 479 Lux when driven by a benchtop power supply at 3.1 V and 250 mA. The LED was mounted to a custom board with a large aluminium heat-spreader, onto which a 15° collimator lens was affixed in order to focus the light produced. The power supply was switched via a relay controlled by an microprocessor board based on the Arduino/ATmega328 platform (microprocessor code is included in Supplementary S3).

The LED, board and lens assembly was mounted to an experimental environment’s cuvette via a slip-on 3D printed adapter (Fig. 6a), which was generated in OpenSCAD on an open source template24. The adapter, which fit snugly around three sides of the cuvette, also served to mount two filters and a light dependent resistor (LDR) at a 90° angle to the light path. The filters used were an excitation bandpass filter (i.e. between the light source and sample) and an emission notch filter (between sample and detector); inspired by ref.25, we used low-cost photography lighting gels as filters (Rosco, USA). 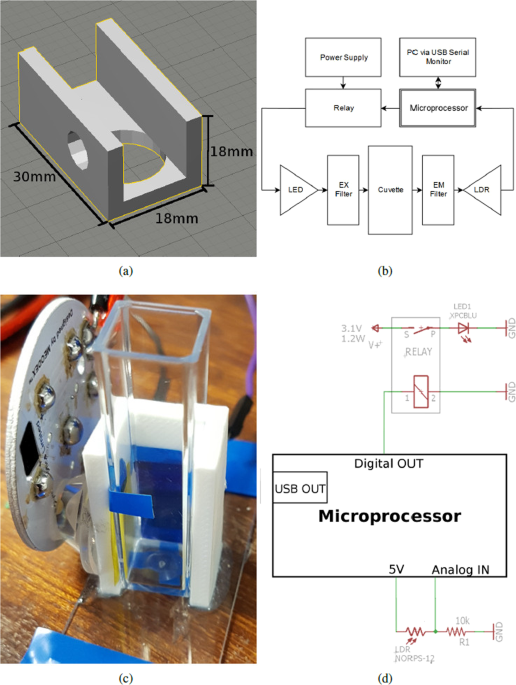 The light intensity was measured by the LDR, using a voltage divider with a resistor (10 kΩ), with the output of the voltage divider read by an analogue pin on the microprocessor. The on-board 10-bit ADC converted the analogue signal into a digital value which was sent to the PC via serial monitor USB link. The system is illustrated in Fig. 6; (b) system schematic, (c) assembled and (d) wiring diagram. A photograph of a deconstructed system is included along with a detailed description of its assembly in Supplementary S1.

The operation cycle of the spectrometer was as follows: the LED is switched on for 1 second and the LDR value is read and printed on-screen. The LED then switches off for 1 second and the LDR value is printed again. The first value (x) returned gives the sensor value, indicating the quantity of fluorescent compound in the sample, and the second value (y) indicates a reference value as an internal control for each reading; therefore, x–y gives a relative sensor value, which may in turn be converted to a particle/cell count estimation with reference to a calibration curve.

The spectrometer was operated inside an opaque box in order to eliminate interference by ambient light. Initial device evaluation was performed on graduated series of FLPs. A calibration curve was made by adding known quantities of FLPs to 2 ml of fresh media in a fluorimeter cuvette and making measurements. Further calibration measurements were made by adding known numbers of cells that had been exposed to FLPs for 6 hours as per the previous ‘manual counting’ experiments; for small numbers of cells, individual organisms were pipetted in, whereas for larger numbers (>200), centrifugation and dilution in conjunction with manual cell counts were used to achieve approximate concentrations.

Further experiments were performed with both electrodes in situ and the spectrometer affixed onto and the cathode immersed in chamber A. Approx. 400 cells were added to A and FLPs were added to B. The cells were allowed 6 hours to migrate to chamber B and consume FLPs, after which the electrodes were connected to a power supply for 300 sec. Spectrometer readings were then made.

Mallinckrodt Teams up with UK RNAi Biotech in Deal Worth up...

This Biotech Helps the Immune System to Infiltrate and Destroy Tumors