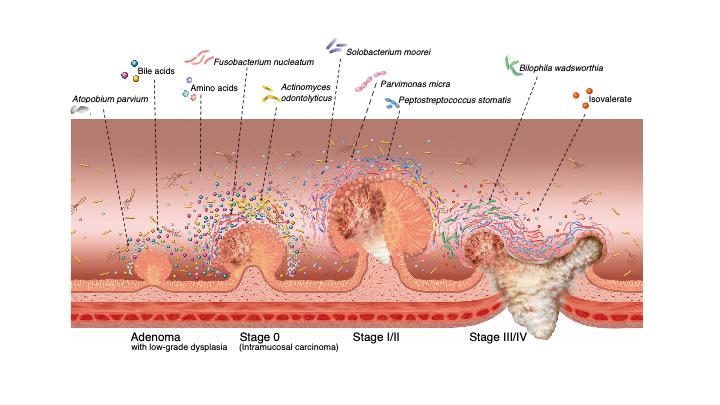 Osaka, Japan – The gut has a population of organisms that live within in it, called the gut microbiome, which are linked to human health and disease. Recent studies have shown that assessing the genetic changes in fecal samples can accurately reflect the status of the gut microbiome, and may be useful for the early diagnosis of diseases.

A group of researchers from Osaka University have recently reported increases in specific microbiome organisms that are linked to the malignancies associated with colorectal cancer, such as intramucosal carcinomas and polypoid adenomas. Their results, recently published in Nature Medicine Letters, reveal that these specific markers could help distinguish cases of colorectal cancer from healthy samples.

“We believe that colorectal cancer is fundamentally not only a genetic but also a microbial disease,” says one of the study’s corresponding authors, Shinichi Yachida. “Our results show that changes in the gut microbiome are present at the very early stages of colorectal cancer development, which could potentially provide vital diagnostic and causative clues for this disease.”

Colorectal cancer, the third most prevalent cancer globally, is a relatively slow-moving disease–meaning it takes a long period of time before reaching its final, fatal stages. Therefore, early detection is crucial to ensuring effective treatment. The researchers used fecal samples from a little over 600 patients who underwent colonoscopy to assess the characteristics of their gut microbiota and how they relate to colorectal cancer.

The article, “Metagenomic and metabolomic analyses reveal distinct stage-specific phenotypes of the gut microbiota in colorectal cancer” was published in Nature Medicine Letters at DOI:10.1038/s41591-019-0458-7

Osaka University was founded in 1931 as one of the seven imperial universities of Japan and now has expanded to one of Japan’s leading comprehensive universities. The University has now embarked on open research revolution from a position as Japan’s most innovative university and among the most innovative institutions in the world according to Reuters 2015 Top 100 Innovative Universities and the Nature Index Innovation 2017. The university’s ability to innovate from the stage of fundamental research through the creation of useful technology with economic impact stems from its broad disciplinary spectrum.

Can Anti-Aging Research Keep Us Healthy in the Long Run?