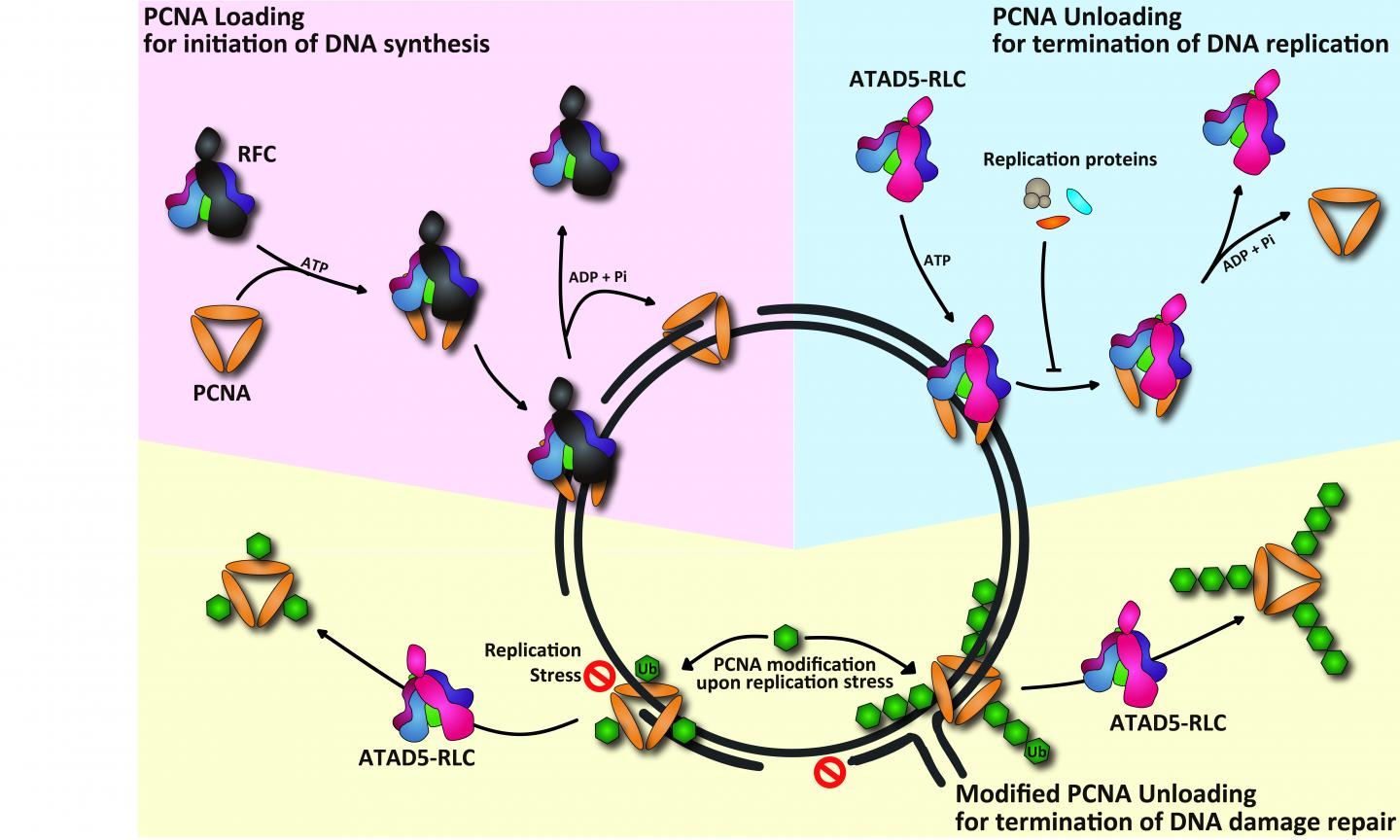 DNA replication is essential for living organisms to faithfully deliver genetic information from parental cells to daughter cells. Many proteins are assembled on the parental DNA to work as replication machineries. Among them, the proliferating cell nuclear antigen (PCNA) is a key replication protein. This ring-structured molecule encircles chromosomes, thread-like structures where DNA molecules is packed into, during DNA replication. Just like a ring on a string, PCNA-ring is tightly linked to DNA. After its landing on DNA, PCNA recruits other proteins to efficiently copy the parental DNA. PCNA’s stable connection to DNA makes it an essential platform for many replication machineries.

Led by director Myung Kyungjae, professor Kim Hajin and Dr. Kang Sukhyun at the Center for Genomic Integrity within the Institute for Basic Science (IBS) at the Ulsan National Institute of Science and Technology (UNIST), South Korea reported that they revealed a novel molecular mechanism for the regulation of PCNA cycling during DNA replication. They found that a specific protein complex called as ATAD5-RFC-Like-Complex (ATAD5-RLC) is a PCNA-unloader. Dr. Myung’s group has established in vitro reconstitution system by which PCNA loading and unloading could be monitored. They proved that ATAD5-RLC opens PCNA ring to be removed from DNA as a bona-fide PCNA unloader.

These findings, in fact come from their previous studies. Another protein complex, the Replication-Factor-C (RFC) is known to open PCNA-ring and loads it onto linear DNA molecule before DNA synthesis. Until now, scientists in the DNA replication field believed RFC also function to unload PCNA since bacterial homolog of RFC does both loading and unloading reaction. Dr. Myung’s group suggested that ATAD5-RLC, having a similar structure to RFC, could be a candidate for a PCNA-unloader. This study proved biochemically that ATAD5-RLC is a bona-fide PCNA unloader. The scientists also revealed that ATAD5-RLC could unload modified PCNA, too. PCNA is modified upon replication stress to deal with DNA damages. These findings highlight the role of ATAD5-RLC as a universal sweeper of PCNA for the termination during DNA replication and repair.

The scientists also identified key motifs in ATAD5 that make the protein complex as a PCNA unloader. They revealed the mechanistic differences between PCNA loading and unloading processes. The scientists found a point mutation in a key motif in ATAD5 from melanoma patients, too. Dr. Sukhyun Kang, one of the corresponding authors of this study says, “It was crucial to functionally dissect ATAD5 and purify active ATAD5-RLC. Establishment of in vitro reconstitution system allowed us mechanistic studies for PCNA unloading.”

This study provides complete understanding of PCNA cycling on replicating DNA. It has been controversial which complex is responsible for the unloading of PCNA after DNA replication and repair. The scientists show that two structurally related complexes play distinct roles in PCNA-DNA association. RFC loads PCNA to initiate DNA synthesis and ATAD5-RLC unloads PCNA to terminate DNA replication/repair. Mechanistic difference between loading and unloading of PCNA revealed by this study gives us conceptual advance to understand DNA replication. Since PCNA unloading is closely linked to chromatin assembly, this study will be the basis of future studies for the relationship between replication termination and maintenance of epigenetic information.

“This is a major progress to understand regulatory mechanism for replication termination process. Since uncontrolled disassembly of replication machineries causes genomic instability that may result in cellular transformation, our study will be beneficial to develop strategies for cancer treatment” explains director Myung.

Brd2 Inhibition as an Approach to Slow Aging