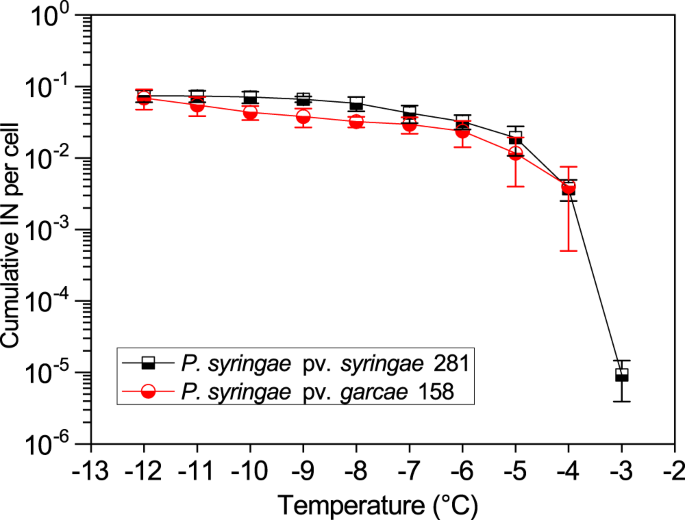 Both P. syringae strains were found to be very sensitive to UV-C, exhibiting survival comparable to the non-UV tolerant bacterium E. coli (Fig. 3). This range of Solar radiation (<280 nm) does not reach Earth’s lower atmosphere (the troposphere), being completely absorbed at the stratosphere. Despite that, the 254 nm wavelength produced by low-pressure mercury lamps is widely used to assess the effects of UV on bacteria in laboratory studies. It efficiently damages DNA and inactivates microorganisms, and, as such, is commonly referred to as “germicidal UV”37. Nevertheless, some bacteria, such as Deinococcus radiodurans, show extreme tolerance to UV-C38. For comparison, a UV-C fluence of about 1,000 J/m2 is required to inactivate 90% of its population32, while the highest fluence tested in this work was just 120 J/m2 (Fig. 3). The biological effects of the different UV radiation ranges and known UV tolerance systems are presented in the Supplementary Discussion.

Covering the wavelengths between 280 and 320 nm, UV-B is the most energetic, and potentially damaging, range of solar radiation that reaches the ground. At higher elevations, the UV flux is increased in relation to lower altitudes, more so at the UV-B region39. In agreement to that, Wang, et al.40 measured a more severe DNA damage in plants at an altitude of 1,700 m than at 300 m. In contrast to the UV-C assays, the P. syringae strains were significantly more resistant to this UV range (at 312 nm) than E. coli (Fig. 4). Even then, it must be recognized that these organisms are comparatively much less tolerant than D. radiodurans, for which over 120,000 J/m2 of UV-B is required to inactivate about 90% of its population at identical experimental conditions32. Still, these results point to some degree of resistance of P. syringae to UV-B, and it is important to notice that these cells are naturally exposed to a much different spectrum which effects considerably different responses32.

The strain 158 (P. syringae pv. garcae) was more tolerant than 281 (P. syringae pv. syringae) to the UV-B at the higher fluences tested. This evidences substantial differences between the strains which can also be observed for the other experiments discussed further below, despite both being classified as the same species. In fact, P. syringae pv. garcae can be distinguished as belonging to a separate, discrete genomospecies than P. syringae pv. syringae on the basis of DNA differences, though a lack of discerning phenotypic characteristics has prevented its reclassification with other strains within the “P. coronafaciens” taxon41. This fact may explain the observations made in this study, where the distinct measured phenotypes probably reflect the underlying dissimilar genotypes.

For a more accurate, relevant representation of the environmental UV than the narrow-band lamps, a solar simulator emitting UV-A + UV-B was used (Fig. 2). Under these conditions, the P. syringae strains were shown to be much more resistant than E. coli (Fig. 5). This can be partially seen as a consequence of the observed higher tolerance of Pseudomonas to the UV-B (Fig. 4), though the presence of UV-A (320–400 nm) can significantly affect some organisms. For example, D. radiodurans is surprisingly sensitive to this higher wavelength fraction of the environmental UV32,38. This confirms that P. syringae can be considered truly tolerant to solar radiation. Additionally, it is important to note that, due to differences between the UV-B lamps’ line emission at 312 nm and the solar simulator broad spectrum (~290–400 nm, Fig. 2), the biological response to both sources is not exactly equivalent. Thus, the survival curves presented for UV-B and “environmental” UV cannot be directly compared on the basis of the measured fluences, considering the Vilber Loumart radiometer’s probes read a spectral range, not a single wavelength.

Joly, et al.27 exposed two P. syringae isolated from cloud water for 10 hours to total final fluences of 85.7 kJ/m2 of UV-A and 27 kJ/m2 of UV-B at 5 °C. After this period, the isolates suffered virtually no viability loss. In the results presented in Fig. 5, it is revealed that Pseudomonas strains actually tolerate acute expositions to considerably larger fluences than the ones used for this previous study. Still, these authors used a lamp with a much different spectrum from the solar simulator, with proportionally less UV-A and a large amount of visible light. Attard, et al.30 used a 1,000 Watt xenon lamp filtered by a glass lid with a total UV-A intensity of 33 W/m2. Interestingly, exposure for 42 hours in distilled water at 17 °C, only reduced the viability of three different P. syringae isolates by about 90% in relation to non-irradiated controls. UV-B measurements (if significant) were not provided, but the final calculated UV-A exposure was of almost 5,000 kJ/m2. Possibly, this less acute exposition could have improved the tolerance of the strains, considering the lower intensity and absence of the more damaging UV-B wavelengths.

As mentioned, the UV-B intensity used for the “environmental” UV experiments is much higher than the values found in some natural environments, even at high altitudes, as reported previously32. Those measurements were performed by the same probes used for the solar simulator with a Vilber Loumart radiometer, under clear sky conditions, at noon, during summer, and at similar latitudes. Taking the UV-B as the most biologically relevant radiation range for comparison, P. syringae strains can be expected to tolerate hours of direct sunlight exposure, even without attenuating factors such as association to cell clusters, mineral particles or organic fragments. Certainly, those factors can become increasingly important for survival at higher altitudes and for longer periods.

The IN activity of 281 was not reduced for cells irradiated for two hours under the solar simulator. The 158 strain, instead, suffered an up to 10-fold decrease at −5 °C, showing that UV can have at least some effect on this trait (Fig. 6). The P. syringae isolates irradiated with UV-A by Attard, et al.30 (mentioned above) presented either a non-significant difference in IN activity at −5 °C or suffered a small reduction. These authors discuss how dead bacteria could maintain their IN activity as long as cell integrity is not disrupted, preserving the large ice nucleation protein aggregates on the cells’ outer membranes. In fact, this is what was observed for cells completely inactivated by UV-C exposure, with again only a relatively small effect measured for 158 (Fig. 6).

Summarizing the UV results, our work reveals that the biological response to commonly used laboratory UV sources is a poor representation of what is found with the solar spectrum, and that while UV can be a serious limitation to the dispersal of P. syringae through the atmosphere, these bacteria are adapted to endure periods of complete exposure to sunlight. A relatively large subset of their population remained capable of influencing cloud nucleation, which, in turn, could favor their deposition back to the ground19,28,29. Perhaps, a greater challenge to these cells is desiccation, both in relation to survival and IN maintenance (see Figs 7 and 8).

Dehydration of cells causes membrane damage, DNA strand breakage, and an increased formation of reactive oxygen species from the cellular metabolism leading to protein oxidation42,43. Similarly to the UV (see Supplementary Discussion), DNA repair and antioxidant systems should be valuable features for bacterial survival under this condition. In the environment, tolerance to desiccation could possibly be achieved by activation of the aerosolized bacteria as cloud condensation nuclei (CCN), enabling hydration of the cells from water vapor harnessed from the air. Since Pseudomonas were shown to be potential efficient CCN due to biosurfactant production13,14,15, this could be another survival mechanism at the disposition of these cells.

Cell clustering could be an important factor contributing to P. syringae tolerance to desiccation when airborne. The experiments were conducted in a manner so as to minimize these artifacts, exposing cells as thin layers to rapidly equilibrate with the RH controlling agents, but masses of natural bacterial populations are probably better adapted to endure this stress. Monier and Lindow44 have previously shown that cells grown as aggregates over leaf surfaces present an increased desiccation tolerance with larger cells clusters, but artificially generated aggregates did not exhibit such effect. An explanation for that is the lack of locally-produced extracellular polymeric substances (EPS), which are formed by cells grown together as groups, but would not be extensively produced under the laboratory culture conditions used. In addition to this point, the osmotic shock of rehydration after desiccation under the tested laboratory conditions could be a significant stress by itself. As reported by Kosanke et al.45, a slow rehydration protocol can increase the survival of dried bacteria. Despite this effect being relatively minor when compared to the large range of survivals measured in this work, it could have also played a role in the results obtained.

Despite its low tolerance to desiccation, the IN activity of 281 was relatively well preserved after desiccation (Fig. 8). The measured decrease by roughly 30 times in IN concentration can possibly be attributed to cell membrane disruption during dehydration affecting the IN protein clusters. Its hydrated controls maintained the full typical IN concentration of this strain (about 10−1 per cell). In contrast, the IN activity of the more desiccation tolerant strain 158 was unexpectedly reduced even in the hydrated controls (Fig. 8) when compared to its typical IN concentration (Fig. 1). The large aggregates of InaZ proteins that form at the cells outer membranes, which are essential for forming efficient IN active at relatively high temperatures such as −5 °C, are known to be particularly heat sensitive36. Even though the temperature of 20 °C at which the hydrated and desiccated cells were kept at during these experiments were not expected to be detrimental to biological IN36, further tests with 158 were performed at 4 °C (Supplementary Fig. S1). This could not recover the typical IN concentration for this strain (Fig. 1), signifying some other mechanism contributes to the instability of the nuclei in this case where the cells are not actively growing and their metabolism, including protein synthesis, is probably reduced. Nevertheless, it can be summarized that one of our main findings is that desiccation can be a much more severe limitation to cells and IN than UV.

Aerial emission of P. syringae from plants was observed to be greater at dryer conditions on sunny days46,47. Despite the abundance of cells being lifted into the air, these desiccating circumstances may impart a significant limitation on living cell dispersion and IN activity right from the start. Alternatively, different studies48,49,50 found large increases of airborne IN evidenced to be to be of microbial origin during and following rainfall. The actual mechanism of aerosolization from raindrop impact has only recently began to be understood51, but these wet conditions may greatly enhance the efficiency of bacterial dissemination through the air within droplets (or at least at high humidity). This may be important for research on feedback effects between rain and IN. Precipitation events may increase further rain by seeding the atmosphere with suspended biological particles52, and the likely enhanced survival and IN preservation when compared to dry, desiccating conditions may be a key step enabling this cycle. Further studies will be necessary to make clear how the biological response of bacterial cells to environmental stresses can have further consequences to the ecosystem they inhabit.

Nearly 1 in 5 parents say their child never wears a...