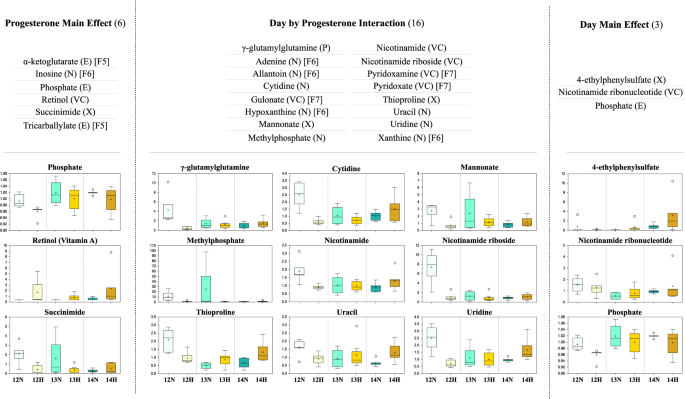 This dynamic presence of energy metabolites, nucleotides, cofactors, vitamins, peptides, and xenobiotics in bovine uterine luminal fluid during the initiation of conceptus elongation offers new insights into maternal-embryo communication in ruminants. Key findings include: (a) elevated P4 is associated with metabolite suppression on Day 12, (b) biochemicals involved in nucleotide metabolism dominate the day by P4 interactions observed, and (c) metabolites constituting purine, pyrimidine, pyridoxal, ascorbate, and tricarboxylic acid cycle metabolism may play a central role in the conceptus elongation process. These are discussed below.

Whilst all cells have an inherent capacity for de novo nucleotide biosynthesis – a highly endergonic process – they can also uptake nucleotides35,36. Interestingly, all four ribonucleosides (adenosine, cytidine, guanosine, and uridine) were present in ULF, as were three of the corresponding ribonucleobases (adenine, guanine, and uridine). This finding, in conjunction with previous identifications of proteins relating to nucleotide transport and metabolism in ULF – e.g. polypyrimidine tract-binding protein 1 and bifunctional purine biosynthesis protein37 – suggests that uterine nucleotide release into ULF during the period of elongation initiation, is conducive to successful conceptus elongation, presumably for RNA production (Fig. 5); the RNA-exclusive nucleoside, uridine, displayed the second greatest day by P4 interaction, increasing in luminal abundance on Day 14 vs. 12 and 13 in the high P4 group, whilst thymine and thymidine, the respective DNA-exclusive nucleobase and nucleoside, were not identified.

Cofactors and vitamins was the only metabolite group displaying a significant flux when comparing all metabolites by treatment and day (Fig. 4). Regarding day by P4 interactions, the enrichment values for nicotinate and nicotinamide, vitamin B6, and ascorbate and aldarate metabolism were 2.5, 2.5, and 1.2, respectively. Nicotinamide is a key intermediate in NAD synthesis, which is crucial for energy metabolism (discussed below). Concentrations of both nicotinamide and nicotinamide riboside were lower in the ULF from high vs. normal P4 heifers on Day 12. Their concentrations, moreover, decreased in the normal P4 group from Day 12 to 14, suggesting decreased uterine nicotinamide salvage and metabolism in the high P4 heifers, likely as a result of altered epithelial energy metabolism. This may be important as a recent study conducted in humans and mice found the nicotinamide pathway plays an important role in miscarriage prevention38.

Retinol (vitamin A) presence was also interesting as it is involved in uterine epithelial cell differentiation regulation and matrix remodelling39. Retinol exhibited a P4 main effect by trending higher in the ULF of high P4 heifers on Days 12 and 14 relative to control. This finding is broadly in line with data from the porcine, wherein P4 increases uterine retinol binding protein (RBP) abundance40. Whilst RBP4 has been identified in bovine ULF37, further research is required to elucidate the roles of retinol and RBPs in ruminant maternal-embryo communication; not least as retinol inhibits activator protein 1 binding to the cyclic AMP response element of the COX-2 promoter, in turn, inhibiting COX-2 transcription, and reducing prostaglandin synthesis41. Moreover, it has been proposed that retinol contributes to uterine quiescence in the human myometrium during pregnancy42.

Similarly to nicotinamide and nicotinamide riboside, the concentration of all detected vitamin B6 metabolites (pyridoxamine, pyridoxal, and pyridoxate) was lower in high vs. normal P4 heifers on Day 12, and generally decreased over time in the normal P4 cohorts (Fig. 6). Interestingly, bacteria of the mammalian intestinal microbiome have the capacity to synthesise vitamins B3, B5, B6, and B1243. Given the day by P4 interaction displayed by pyridoxamine and pyridoxate, phenol sulfate20, and trend towards a day by P4 interaction by hippurate – all of which are microbiome-associated and unrelated metabolites – it is tempting to suggest that P4 may alter the bacterial profile of the bovine uterus44 and, in turn, ULF composition.

Further supporting this notion that ULF composition may be influenced by symbiotes is the identification of microbiome-associated45,46 xenobiotics ergothioneine and mannonate in ULF. Moreover, the presence of ascorbate (vitamin C), in addition to uric acid – both potent antioxidants47 – hints at the capacity of ULF to regulate redox homeostasis. These findings, taken together, highlight the potential role, and need for research into the impact, of factors beyond endometrial secretions on maternal-embryo communication.

Even though just two peptide metabolites were identified, the most pronounced day by P4 interaction observed in this study was that of γ-glutamylglutamine – a dipeptide of amino acids glutamate and glutamine, and proteolytic breakdown product48. The increase in γ-glutamylglutamine levels on Days 13 and 14 vs. 12 in high P4 heifers may be indicative of elevated uterine luminal protease37 activity. However, whether γ-glutamylglutamine, and phenylacetylglycine for that matter, are short-lived intermediates en route to further proteolysis, or have physiological cell-signalling effects, is unknown. It is worth noting the murine hatching embryo secretes a trypsin-like protease in vitro49, and, in the equine, peptidase D and the proteasome 26S subunit were in greater abundance in the ULF of pregnant vs. cyclic mares on Day 1350. Thus, uterine luminal protein degradation may be a free amino acid generation mechanism.

The TCA cycle is generally considered the central metabolic hub of the cell as it is the final common pathway for fuel molecule oxidation, including carbohydrates, fatty acids, and amino acids51. Forde et al.37 previously identified 5 of the 8 enzymes involved in the TCA cycle in bovine ULF: aconitase, isocitrate dehydrogenase, fumarate hydratase (fumarase), malate dehydrogenase, and citrate synthase. Here we identified 6 of the 10 key corresponding metabolites: citrate, aconitate, isocitrate, 2-oxoglutarate, succinate, and malate; raising the question of whether parts of the TCA cycle (Fig. 7) are active in ULF.

Of particular intrigue is α-ketoglutarate (a.k.a. 2-oxoglutarate), which exhibited a P4 main effect owing to a decrease in high vs. normal P4 heifers on Day 12 in addition to a decline in normal P4 heifers on Day 14 vs. 12 – i.e. 2-oxoglutarate levels inversely correlated with an advanced elongation environment. Whilst this intuitively implies that extracellular 2-oxoglutarate is not important for the elongating conceptus, it is telling that ULF is enzymatically equipped to produce 2-oxoglutarate from any one of malate, citrate, or isocitrate37. Aside from its role as a TCA cycle intermediate, 2-oxoglutarate is a common source of amino acids glutamate and glutamine52; though such a breakdown in ULF is unlikely as the catalyst, glutamate dehydrogenase, has not been identified in ULF. Nonetheless, 2-oxoglutarate can scavenge and sequester hydrogen peroxide (H2O2) in vitro prior to succinate conversion53. As H2O2 is a main source of reactive oxygen species, known to increase embryonic DNA damage54, further investigation into this phenomenon within an in vivo reproductive context is warranted.

Succinate followed an identical profile to 2-oxoglutarate and trended towards a day by P4 interaction. It is important to highlight that succinate synthesis would be the terminal step in a ULF TCA cycle, as succinate dehydrogenase [a.k.a. succinate-coenzyme Q reductase (SQR) or respiratory complex II], which catalyses the reversible oxidation of succinate to fumarate, is solely localised at inner mitochondrial membranes55. Regardless, succinate plays numerous signalling roles, such as stabilizing the hypoxia-inducible factor-1 alpha (HIF-1α) transcription factor56, whose knockout in the mouse is embryo-lethal owing to vascular defects in the embryonic and extraembryonic vasculature57. Moreover, G-protein coupled receptor 91 (GPCR91), previously considered an orphan receptor58, has been recently shown to sense extracellular succinate59, and in utero upregulation of GPCR91 in the rat foetus predisposes the offspring to hypertension60.

Given that all primary constituents of the first TCA cycle reactions have been identified in ULF, it is plausible to assume a role for energy metabolites in conceptus elongation, perhaps beyond energy production. Moreover, the presence of tricarballylate – an aconitase (the enzyme catalysing the formation of isocitrate from citrate) inhibitor61 of aerobic bacterial origin62 – further exemplifies the need to investigate the impact of the microbiome in uterine metabolism and maternal-embryo communication.

Furthermore, whilst this work on maternal-embryo communication using cyclic heifers inherently focuses on a unidirectional monologue (maternally secreted metabolites), future work includes similarly analysing ULF from pregnant heifers – in addition to corresponding conceptus-conditioned culture medium – to tease out the reciprocity of bovine pregnancy establishment. Additional future work includes further investigating P4-induced changes in the ruminant ULF proteome. For example, uterine serpins (or milk proteins) are secreted by the ovine63,64,65 and bovine66 uterus, in a hormonally responsive manner, presumably as a mechanism of immunomodulation, despite their classification as proteinase inhibitors67. Similarly, elucidating the precise role of conceptus-derived proteins, such as trophoblast Kunitz domain proteins – also categorised as proteinase inhibitors68 – is essential to furthering our understanding of maternal-embryo communication and pregnancy establishment in ruminants.

Lastly, it is important to note that elevated P4 on Day 5, but not thereafter, in the high P4 group is consistent with previous observations of accelerated conceptus elongation on Days 12–1414. More specifically, elevated P4 resulting from PRID introduction on Day 3 temporally advances the endometrial transcriptome by ~48–72 h during the conceptus elongation window69 despite systemic P4 concentrations returning to normal12.

In conclusion, this manuscript presents and describes the dynamic presence of energy substrates, nucleotides, cofactors, vitamins, and xenobiotics in the bovine uterine luminal fluid during the conceptus elongation-initiation window. The data show that elevated P4 suppresses ULF metabolite concentrations on Day 12 and may alter the uterine microbiome. Moreover, ULF has the capacity to act as a redox buffer, and biochemicals in ULF involved in purine, pyrimidine, pyridoxal, ascorbate, and tricarboxylic acid cycle metabolism likely facilitate conceptus elongation initiation.

Why Clinical Trial Design Can Make or Break Your Company