Sagittal otoliths from adult Lake Sturgeon used in this study were voluntarily contributed by state-licensed anglers in a sustainably-managed Lake Sturgeon sport fishery on Lake Winnebago, Wisconsin. Worldwide, many sturgeon species are either threatened or endangered, however, the Lake Winnebago sturgeon fishery has been sustainably managed for more than a century10. No live animals from Lake Winnebago were handled by the authors for the purposes of this study. A survey of sagittal otoliths from a number of adult Lake Sturgeon of the Lake Winnebago fishery show them to be primarily vaterite (~80 wt%) with some calcite (~20 wt%)5. The vaterite in these otoliths often occurs as spherulites ranging from <1 to 300 μm (Fig. 2). For this study, a spherulite ~30 μm in diameter was used. In thin section (30 μm thick), this vaterite is uniaxial (+) and shows 5th order interference colors corresponding to a birefringence of ~0.08, which compares reasonably well with the range of 0.094–0.100 reported in mineralogical databases11.

A second sample used in this study was from a juvenile fish, hatchery-reared by one of the authors (AL) using eggs and milt from wild fish of the Winnipeg River system in northern Manitoba, Canada. This lapilli otolith consisted of a single spherulite (~100 μm) of vaterite from an individual 78 days old4. All procedures conducted on these fish were approved by the Animal Care Committee at the University of Manitoba permit# F15-007 in accordance with guidelines established by the Canadian Council for Animal Care.

Individual spherulites were mounted in the manner of single crystals, using a 300 μm diameter Molecular Dimensions LithoLoop with a drop of Paratone oil. Data were collected using a Rigaku XtaLAB PRO diffractometer equipped with graphite monochromated Mo Kα radiation, a Dectris Pilatus 200 K detector, and the Rigaku Oxford Diffraction CrysAlisPro software. The flat-plate detector center, distance, and orientation, as well as the peak shape parameters were calibrated using the NIST LaB6 Standard Reference Material 660C powder on the same style mounting loop. Crystallographic texture is manifested in the diffraction pattern by incomplete Debye-Scherrer rings (Fig. 3). Data for the texture analysis of the vaterite spherulites were collected at 7 ω angles −60°, −40°, −20°, 0°, +20°, +40° and +60° for 2θ = 0°. Each image was recorded for 300 s, for a total data collection time of 35 mins per sample. Each of these detector images was processed into radial scans every 5° of η (angular coordinate around the diffraction rings). Those scans that intercepted the beam-stop shadow or the dead-space of the detector segments were not used. Texture analysis was determined by Rietveld refinement12 with the software package Materials Analysis Using Diffraction (MAUD 2.78)13 using the WIMV method (see review by Matthies et al.14) and following the analysis procedure of Lutterotti et al.15. The orientation distribution function resolution used was 5°. Although the exact crystal structure of vaterite has been the subject of discussion for over 50 years, see reviews by Christy16, Makovicky17, and Wang et al.18, we have adopted the P6522 model proposed by Wang and Becker19 which gives a sufficiently good fit to both neutron and X-ray diffraction data20,21 (Fig. 4). The structural parameters were held fixed during the refinement, but the background, scale factors, and sample shifts were refined. The data for at least 3 values of ω angles were used in the final analysis to ensure sufficient pole figure coverage. The datasets generated during and analysed during the current study are available from the corresponding author on reasonable request.

X-ray diffraction patterns (Mo Kα radiation): (a) of a lapilli otolith consisting of a single vaterite spherulite (~100 μm in diameter) from a juvenile hatchery-reared Lake Sturgeon, University of Manitoba. (b) Ideally random powdered vaterite from a Lake Sturgeon otolith, Lake Winnebago, Wisconsin. The images were recorded for 300 s while rotating the samples 1°/s around the vertical ϕ axis. The detector consists of 2 segments with a horizontal dead space between them. The shadow of the beam stop extends upward to the right. A faint shadow of the sample mounting pin extends down from center. 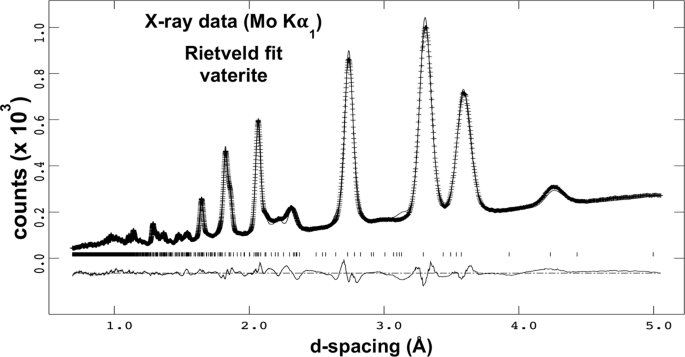 Rietveld refinement fit of ideally random powdered vaterite spherulites from an adult Lake Sturgeon otolith, Lake Winnebago, Wisconsin. Crosses are the experimental data, the solid line is the model fit, the vertical bars mark the reflection peak positions, and the lower curve is the difference between the model and the observed intensities. The P6522 space group model of Wang and Becker19 was used, and although not perfect, it is sufficient for analyzing the texture model.