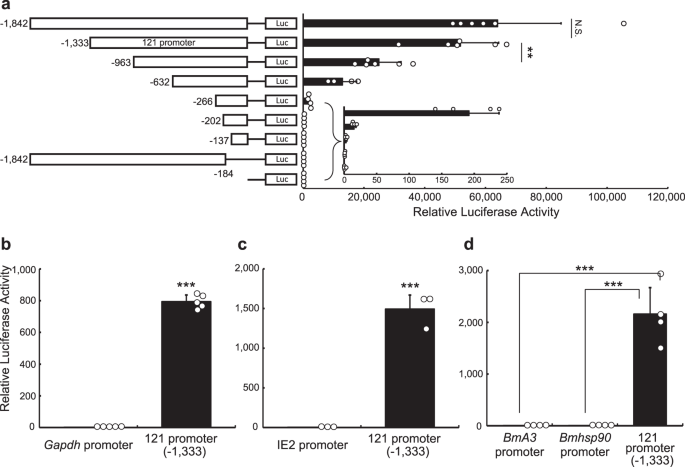 To isolate a strong constitutive promoter, the promoter region of the Pv.00443 gene was cloned after reference to the RNA-seq data in MidgeBase (http://bertone.nises-f.affrc.go.jp/midgebase/)11. AcGFP1-expressing vectors containing a deletion series of the 121 promoter (Fig. S3) were constructed by replacing the PvGapdh-promoter region of pPGK-AcGFP17 with the 121 promoter series (pP121K-AcGFP1 series; Fig. S3). The AcGFP1 genes of the 121 promoter vector series were replaced with the MetLuc gene from pMetLuc2 (TaKaRa Bio, Kusatsu, Shiga, Japan) to construct MetLuc-expression vectors for the deletion experiment in Fig. 1a. The promoter regions of the MetLuc-expression vectors were replaced with the OpIE2, BmA3 and Bmhsp90 promoters (Figs 1–3) from pIZ (Thermo Fisher Scientific), pGL3-A3 and pGL3-hsp90P2.9k14, using the SLiCE method46 or NEBuilder® HiFi DNA Assembly Master Mix (New England BioLabs, Ipswich, MA, USA). The AcGFP1 gene of pPGK-AcGFP1 was replaced with the MetLuc gene for the comparison of promoter activity between the 121 and PvGapdh promoters (Fig. 1b). The SEAP gene was cloned from pSEAP2 (TaKaRa Bio) and inserted in place of the MetLuc gene in the expression vectors with the PvGapdh, OpIE2 and Bmhsp90 promoters.

The construction scheme of the vectors for stable expression is presented in Figs S9 and S10. First, we newly created a basic vector with two gene cassettes: ‘121 promoter-MCS’ and ‘121 promoter-ZeoR’ (the complete sequence is shown in Supplementary Data 2). For construction of the vectors, the fragments were prepared by PCR (Table S6) and ligated by NEBuilder® HiFi DNA Assembly: the AmpR gene from pIREShyg3 (TaKaRa Bio); the 121 promoter from pP121K-AcGFP1; pUC ori, ZeoR and OpIE2 polyadenylation site from pIZ (Thermo Fisher Scientific). For AcGFP1 expression, the basic vector was digested with HindIII and XhoI, and the AcGFP1 fragment, prepared by PCR, was inserted using a NEBuilder® HiFi DNA Assembly kit. For the remaining constructs, the backbone vectors and insert fragments were prepared by enzyme digestion and PCR, respectively, and HiFi assembly was carried out.

To construct the Nluc expression vectors, the AcGFP1 gene in the nine vectors was replaced by the Nluc gene by NEBuilder® HiFi DNA Assembly; the backbone vectors were prepared by HindIII and XhoI digestion, and the PCR fragment of Nluc gene from pNL1.1 (Promega,  Fitchburg, WI, USA) was ligated into the cut vectors.

Transformed cells were stained with DAPI (Dojindo, Kamimashiki, Kumamoto, Japan). A CytoFLEX S flow cytometer (Beckman Coulter), equipped with 375-nm and 488-nm lasers, was used to detect the fluorescence of DAPI and AcGFP1, respectively. The gating hierarchy and dot-plot images of the SaPe-4 cells are shown in Fig. S6. The same gating method was applied to transformed S2 and Sf9 cells.

All data were expressed as mean ± SD. Statistical significance between two groups was examined by the Student t-test in Figs 1b,c and 2. Statistical significance among more than two groups was examined by ANOVA followed by Tukey test as a post-hoc test  (Figs 1a, 3, 4, 5, S1 and S7). A p-value < 0.05 denoted a statistically significant difference. GraphPad Prism 8 software (GraphPad, San Diego, CA, USA) was used for the statistical analyses.

Electroacupuncture at Zusanli and at Neiguan characterized point specificity in the...