Selection of MET-TF candidates in fibroblasts

To identify the TFs promoting MET in fibroblasts, we first selected candidate MET-TFs among 1995 TF genes annotated by functional annotation of mammalian genome 5 (FANTOM5)21, based on a positive or negative expression correlation with E or M markers, respectively. CDH1 and VIM were used as representative E and M marker genes, respectively, since the expression of these genes showed the strongest anti-correlation among typical E and M markers in two public gene expression databases: the Cancer Cell Line Encyclopedia (CCLE, https://portals.broadinstitute.org/ccle/) and the FANTOM5 (Fig. S1). We calculated and plotted the Pearson correlation coefficient r, between the expression of TF genes and the expression of CDH1 or VIM, across 1038 CCLE microarrays for cancer cell lines representing various degrees of E and M states (Fig. 1A). As expected, known MET-TF genes, the OVOL13 and GRHL11 families, exhibited a strongly positive correlation with CDH1 and a negative correlation with VIM, whereas known EMT-TF genes, the SNAI, TWIST, and ZEB families, exhibited opposite correlations, thus confirming the validity of this approach. Ten candidate MET-TFs were selected from this plot (i.e., ANKRD22, EHF, ELF3, FOXA1, GRHL1/2/3, IRF6, OVOL2, and ZNF165). In addition, GATA318, FOXA319, HNF1A22, KLF420, and TP6323 were selected on the basis of their previously reported involvement in MET activation or EMT suppression. A correlation between these candidate factors and the E state was also observed in 1829 FANTOM5 data for normal primary cell types (Fig. S2), where YBX2 was selected on the basis of its strong association with the E state. This resulted in a list of 16 candidate MET-TFs (Table 1). 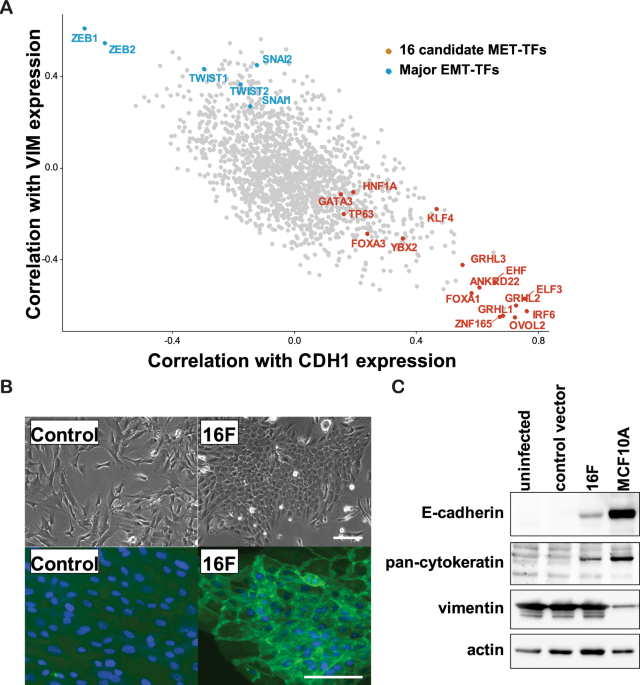 Identification of OVOL2 as a potent MET inducer in dermal fibroblasts

The 16 selected TFs were then tested for their potential to induce MET in human neonatal dermal fibroblasts (HNDFs) by ectopic expression. When they were simultaneously introduced by pooled lentiviral vectors at a MOI of 20 (1.25 MOI for each TF), a subset of HNDFs started to form colonies with epithelial morphology (Fig. 1B). The E marker proteins E-cadherin and cytokeratins were detected along with the morphological changes, whereas no changes were observed in the M marker vimentin (Fig. 1C), likely because the epithelial conversion occurred in a small cell population, with most of the cells remaining in the mesenchymal state. These results suggest that the 16 candidate TFs contain factor(s) that can promote MET in fibroblasts.

We then looked for essential MET-TFs among the 16 candidates, by performing an “all-minus-one” screening based on Yamanaka’s approach, which was used when the minimum set of iPSC reprogramming factors was discovered by his group24 (Fig. 2A). This screening revealed that, among the 16 candidates, OVOL2 is the only indispensable factor for the induction of the E marker gene CDH1. However, OVOL2 alone was not sufficient to activate CDH1 expression to the level achieved by all 16 factors (Fig. 2B). Therefore, we hypothesized that other factors might activate CDH1 expression cooperatively with OVOL2. To test this hypothesis, we performed an “OVOL2-plus-one” screening and found that HNF1A, TP63, and KLF4 exhibited the highest enhancement of OVOL2-induced CDH1 expression (Fig. 2C), which was confirmed to be statistically significant (Fig. 2B).

Identification of TF combinations that induce E phenotype in fibroblasts. (A) Identification of indispensable factor(s) for CDH1 induction in HNDFs, using an all-minus-one screening approach. Quantitative RT-PCR (RT-qPCR) was performed to quantify CDH1 expression 7 days after transduction of the indicated factors in HNDF. (B) Statistics analysis of CDH1 induction by combination of OVOL2 with HNF1A, TP63 or KLF4. Results are presented as means ± S.D. of three biological replicates. **p < 0.01 (C) OVOL2-plus-one factor screening was performed to identify the cooperative partners of OVOL2 in inducing CDH1 expression in HNDF.

The cooperative factors of OVOL2-induced CDH1 expression, HNF1A, TP63, and KLF4, are involved in several processes of fibroblast reprogramming into epithelial lineages25,26,27. Overexpression of TP63 together with KLF4 was reported to induce a keratinocyte-like state in human fibroblasts20. In addition, previous studies used multiple TF combinations including HNF1A, HNF4A, and FOXA factors to reprogram human or mouse fibroblasts into hepatocyte-like state25,27. Therefore, we hypothesized that reprogramming-mediated MET in keratinocyte- or hepatocyte-like states may be enhanced by OVOL2. To test this hypothesis, we investigated keratinocyte- and hepatocyte-like reprogramming using combinations of TP63/KLF4 (TK) and HNF1A/HNF4A/FOXA3 (HF), respectively, with or without OVOL2. A tetracycline-inducible lentiviral vector was generated using dual selection to control the expression of OVOL2 and TK or HF (See Methods section for details). To determine the cooperative enhancement of MET by the factor combinations, the TFs induction levels were set such that HF, TK, or OVOL2 could not, by themselves, show detectable morphological changes within 4–5 days after doxycycline (DOX) induction (bottom left in Fig. 3A,B). However, under the same conditions, the combination of OVOL2 with either TK or HF (TK + OVOL2 or HF + OVOL2) dramatically facilitated epithelial-like morphological changes and became less proliferative (bottom right in Fig. 3A,B). Further, both TK + OVOL2 and HF + OVOL2 combinations dramatically suppressed the directional migration phenotype, which is an important feature of MET28, as compared with the respective controls including negative control vectors (Control), OVOL2 alone (OVOL2), TK alone (TK), and HF alone (HF) (Fig. 3C). These data implicate that, in fibroblasts, functional MET is facilitated by the combination of TK + OVOL2 or HF + OVOL2.

Cooperative induction of epithelial phenotype by combined OVOL2 and lineage factors. (A,B) Morphological changes induced by TFs combinations. Tetracycline-inducible (Tet-ON) puromycin-resistant lentivirus for KLF4/TP63 (TK) or HNF1A/HNF4A/FOXA3 (HF), Tet-ON hygromycin-resistant lentivirus for OVOL2, and the corresponding negative controls for each expression system were transduced in HNDF. After dual antibiotic selection of the infected cells, transduced genes were induced by doxycycline (DOX, 500 ng/mL) treatment for 4 days. Scale bar = 100 μm. (C) Motility phenotype changes induced by TFs combinations. The indicated TFs combinations were induced in HNDFs by DOX as described in (A,B). Four days after induction, DOX was removed and cellular movement and proliferation were tracked by nuclear RFP signals using the IncuCyte live-cell imaging system. The mean squared displacement (MSD) for the cellular movement was obtained as described in the Methods section.

Next, we examined whether OVOL2 facilitates fibroblast reprogramming into specific epithelial lineages. Since several previous studies reported the conserved role of the OVOL family factors during ectodermal tissue development29,30, we investigated the involvement of OVOL2 in the reprogramming of HNDFs into the keratinocyte-like state. The results showed that TK + OVOL2-transduced HNDFs showed a dramatically increased expression of the keratinocyte-specific (K) marker genes KRT14 and TP63 (Fig. 4A). Consistent with the changes in morphology/physiology (Fig. 3), the E marker CDH1 was dramatically induced by the combination of TK + OVOL2 (Fig. 4A). Importantly, the expression of the M marker VIM was significantly reduced by TK + OVOL2, thus confirming M-state suppression concurrently to E-state activation (Fig. 4A). Furthermore, transduction of TK + OVOL2 in HNDFs resulted in a dramatic increase of a KRT14 protein-expressing cell population at a 43% rate, whereas with TK, only 5.8% of cells became KRT14 positive (Fig. 4B). This suggests that the reprogramming efficiency was increased at the population level. Taken together, these results support that the combination of TK + OVOL2 cooperatively facilitates HNDF reprogramming both at cellular and gene expression levels toward the keratinocyte-like state through activation of the keratinocyte-specific transcriptional regulatory network with MET enhancement. 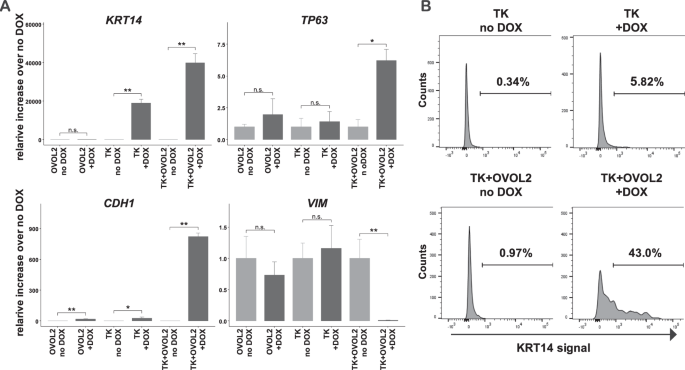 Chromatin state directly reflects the lineage identity of a given cell, providing clues to understand the regulatory mechanisms of cell-state transitions31. Therefore, we evaluated changes in chromatin accessibility following induction of TF combinations in HNDFs, using ATAC-seq32. Cooperative induction of open or closed chromatin state by TK + OVOL2 was observed at the promoter region of the representative E or M gene loci, such as CDH1 or VIM, respectively (Fig. 5A, marked in red). Interestingly, – CDH1 enhancers defined by the Roadmap Epigenetics Project33 showed an open chromatin state only under OVOL2 expression, whereas VIM enhancers showed a tendency toward the closed chromatin state by the combination of TK + OVOL2 (Fig. 5A, marked in blue). This suggests that those loci are involved in the cell reprogramming mechanism. We then compared chromatin state changes with transcriptomic changes assessed by CAGE34. At a genome-wide scale, TK + OVOL2-transduced HNDFs showed greater changes toward keratinocyte-like state than either OVOL2 or TK alone, both in CAGE and in ATAC-seq data (Fig. S3). Next, we created a list of E, K, M, fibroblast (F)-specific gene sets based on previous literature (Table S1)35,36,37,38 and investigated how these gene categories would behave transcriptionally and how their corresponding chromatin accessibility would behave epigenetically during reprogramming (Fig. 5B). The combination of TK + OVOL2 markedly enhanced both the transcriptional activity and the chromatin accessibility of E and K genes. In contrast, both OVOL2 and TK alone failed to induce expression and chromatin accessibility in E and K genes, apart from a mild activation of E gene expression by OVOL2 alone. On the other hand, the expression of M genes was inhibited by either OVOL2 or TK alone, which was further enhanced by the combination of TK + OVOL2, whereas chromatin accessibility changes were observed only for TK + OVOL2. Transcriptional inhibition of F genes was observed only in the TK + OVOL2-introduced HNDFs. However, chromatin accessibility did not show significant changes. These results indicate that TK + OVOL2 substantially enhances epigenetic changes of HNDFs toward keratinocyte-like state at representative genomic loci, and most of transcriptional changes are accompanied by changes in the chromatin state. 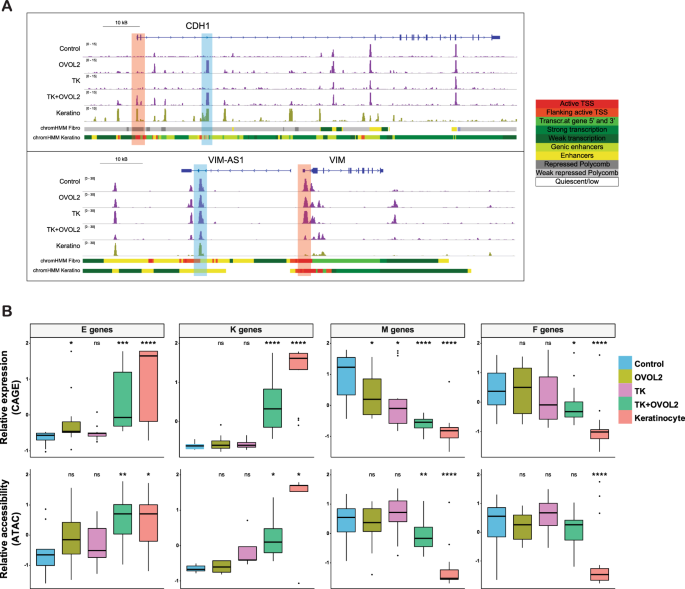 Enhanced chromatin accessibility changes by OVOL2 combined with lineage factors. (A) Genome browser view of ATAC-seq signals at the CDH1 and VIM loci. Promoter and potential enhancer regions that showed enhanced changes by a combination of TK + OVOL2 are highlighted in red and blue, respectively. Roadmap annotation of genomic regions (promoters and enhancers for the indicated cell types) is shown at the bottom. (B) A box plot showing Z-scores for expression (CAGE, top) or chromatin accessibility (ATAC, bottom) in E, M, K, and F genes, respectively. p-values were calculated through comparison with control samples. *p < 0.01, **p < 0.001, ***p < 0.0001, ****p < 0.00001.

Distinct regulation of chromatin accessibility by OVOL2 and TP63/KLF4

Chromatin accessibility evaluation is a powerful approach to dissect the activity of regulatory elements through TF-binding motif analysis39. To understand the transcriptional regulatory networks that define fibroblast and keratinocyte lineages, we investigated the differences in enriched TF-binding motifs at open chromatin loci between primary fibroblasts (i.e., control HNDF) and primary keratinocytes using the analytical program chromVAR40. Among the 808 curated TF motifs used in the analysis, 34 were significantly more accessible in fibroblasts whereas 72 were significantly more accessible in keratinocytes (q < 0.01 and enrichment_score > 5) (Fig. 6A, Table S2). Among them, 9 out of 34 and 18 out of 72 showed a significantly different expression in the CAGE data (q value < 0.01 and |log fold change| > 1; Fig. 6B). This unbiased analysis revealed that TP63 and KLF4 motifs were significantly more accessible in keratinocytes, indicating the importance of these factors to specify the keratinocyte lineage (Fig. 6A). In contrast, OVOL1/2 motifs were significantly more accessible in primary fibroblasts (Fig. 6A). When directly compared with the CAGE expression data (Fig. 6C), the gene expression and motif enrichment scores of OVOL1/2 show opposite trends, in that OVOL1/2 motifs become inaccessible when OVOLs are expressed, suggesting that OVOLs act as negative regulators of the chromatin state. Other factors of interest included the AP1 family factors JUN/JUND/FOS, inhibitor of DNA binding family ID3/4, and EMT-TFs SNAI1 and ZEB1. Notably, no other candidate MET-TFs presented in Table 1 showed significant differences between the two cell lineages regarding their motif accessibilities (Table S2). 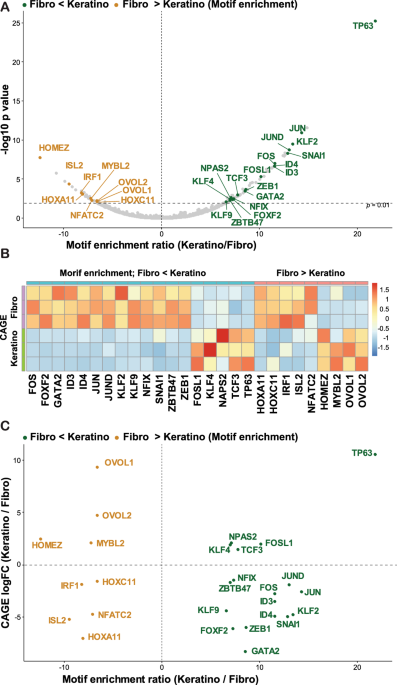 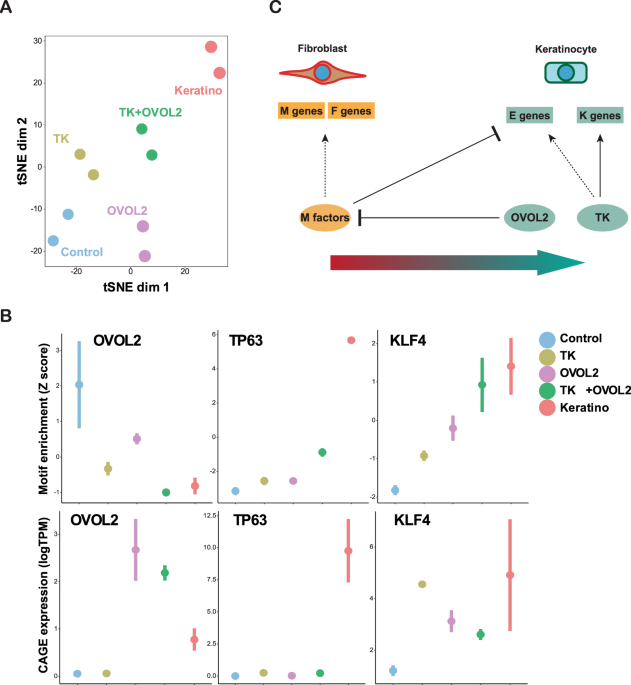 Changes in motif accessibility and TF expression during reprogramming. (A) tSNE plot using TF motif enrichment scores for each condition based on the ATAC-seq data. (B) Motif accessibility and TF genes expression. Motif enrichment score (Z score) and CAGE expression (logTPM) are shown in the top and bottom panels, respectively, for the indicated TFs. (C) A proposed model for MET induction in fibroblast by OVOL2 and lineage factors.

How to Invest Smart in Biotech Stocks