Australian Biotech News
Home Ngaiire Media Can we solve the riddle of the coral reef halos? 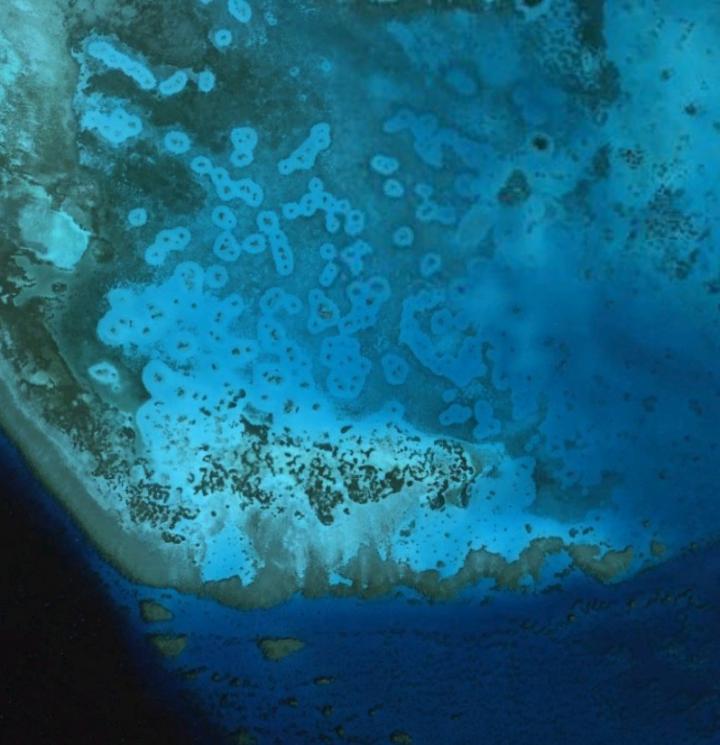 Coral reefs worldwide are threatened by a variety of human impacts. Fishing is among the most pressing threats to reefs, because it occurs on most reef systems and fundamentally alters food webs. Meanwhile, observing coral reefs, particularly remote, hard-to-access locations such as the Northwestern Hawaiian Islands (NWHI), remains notoriously difficult and expensive. But a University of Hawai’i (UH) at Mānoa researcher and her collaborators may have found a mysterious natural phenomenon that can help us observe coral reef health from space.

Patches of coral reef are often surrounded by very large ‘halos’ of bare sand that are hundreds to thousands of square meters. Beyond these halos lie lush meadows of seagrass or algae. Two recently published studies and a third feature story led by Elizabeth Madin, assistant research professor at the Hawai’i Institute of Marine Biology (HIMB) in the UH at Mānoa School of Ocean and Earth Science and Technology, shed light on these enigmatic features that are visible from space.

Scientists have observed reef halos for decades and explained their presence as the result of fish and invertebrates, who typically hide in a patch of coral, venturing out to eat algae and seagrass that cover the surrounding seabed. But the fear of predators keeping these smaller animals close to safety has long been thought to explain why the cleared area is circular. Madin’s recent work reveals there is more to the story, and further that these features may be useful in observing aspects of reef ecosystem health from space.

In one of Madin’s new studies, published in the Proceedings of the Royal Society B, her team of scientists found that no-take marine reserves, where fishing is prohibited, dramatically shape these seascape-scale vegetation patterns in coral reef ecosystems, influencing the occurrence of the prominent ‘halo’ pattern. This means that marine reserves may have even greater impacts on coral reef seascapes than previously known.

The team hypothesized that if the “formation of the halos was driven by small fish’s fear of being eaten, so the number of predators around should be linked to whether these bare patches appear and how big they are,” Madin explained in an article published recently in New Scientist. “With fewer predators, you would expect the grazing fish to be less fearful and so venture further from the reef, resulting in wider halos.”

But to Madin and her team’s great surprise, using freely-available satellite imagery they saw no difference in size of the halos inside versus outside of no-fishing marine reserves. However, they did find that the halos are significantly more likely to occur in no-take marine reserves, demonstrating novel landscape-scale effects of marine reserves.

In the second study, published in Frontiers, Madin and colleagues found that a more complex set of species interactions than previously assumed likely influence these halos. Using a combination of very high definition remote underwater video camera traps and traditional ecological studies on coral reefs within Australia’s Great Barrier Reef, Madin observed that in addition to the plant-eating fishes known to play a role in halo formation, invertebrate-eating fishes that dig in the sand for prey were disrupting the algae out to the halos’ edges and making them bigger. Another piece of the puzzle had been revealed.

Collectively, Madin’s work shows that the presence of halos may serve as an indicator of aspects of reef ecosystem health, because halos are suspected to be the indirect result of healthy predator and herbivore populations. Madin’s ongoing studies of halos have shown that they can appear and disappear over time and change significantly in size, a phenomenon that suggests environmental factors also influence halos.

“We urgently need more cost- and time-efficient ways of monitoring such reefs,” said Madin. “Our work couples freely-available satellite imagery, with traditional field-based experiments and observations, to start to unravel the mystery of what the globally-widespread patterns of ‘halos’ around coral reefs can tell us about how reef ecosystems may be changing over space and/or time due to fisheries or marine reserves. This will therefore pave the way for the development of a novel, technology-based solution to the challenge of monitoring large areas of coral reef and enable management of healthy reef ecosystems and sustainable fisheries.”

Why Are There Only 10 Cell and Gene Therapies in Europe?

The solar cell you can print